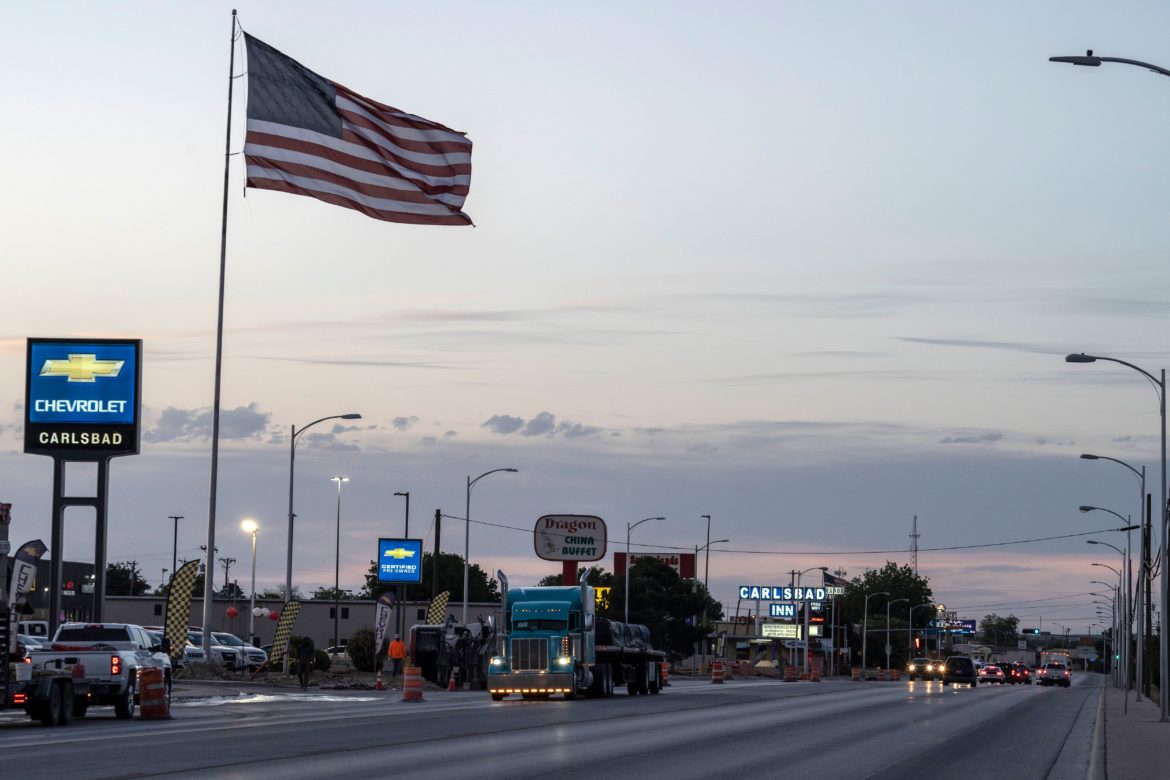 Carlsbad was once a town whose main industry was mining potash, and tourism because of the nearby Carlsbad Caverns National Park, but only until recently have things changed due to an explosion in oil and gas extraction. Currently the economic future of the town is uncertain due to the drop in oil prices and a loss in demand due to COVID-19.

Antoinette Sedillo Lopez quickly learned the harsh reality of New Mexico politics after she was appointed to fill an empty seat in the state senate two years ago.

One of the first bills she pushed sought a four-year pause on new fracking permits on state lands, taking that time to study the environmental, health and safety impacts of the controversial oil and gas drilling technique.

Sedillo Lopez believed it was a sensible piece of legislation, one that was tempered and looked out for New Mexicans. But almost right away, the bill died,never getting out of committee. The same thing happened to a similar measure she pushed earlier this year, with support from dozens of environmental and Indigenous organizations. A fellow Democrat, state senator Joseph Cervantes, declined to schedule the bill for a hearing.

The bill was always a longshot–no major oil and gas state has ever banned fracking. Only Vermont, Washington, Maryland and New York have. Yet Sedillo Lopez was startled by the vicious response to her bill, including its pro-drilling critics who mischaracterized it as an outright fracking ban, rather than a pause. “There was a lot of gaslighting,” she said.

For the last decade, the oil and gas industry’s influence has only grown in New Mexico, one of the top oil and gas producers in the US. The sector has promised good-paying jobs and economic growth, all while consistently damaging the environment and burdening minority communities with pollution. It has managed to maintain this stranglehold by staying intricately involved in state politics, according to campaign donation data, as well as documents reported here for the first time.

Sedillo Lopez said she knew before she took office that the oil and gas industry, like any other, would exert pressure where possible through campaign donations. But up close, the scale of the industry’s reach shook her: Many New Mexico politicians from both major parties, including Cervantes, take huge campaign donations from fossil fuel interests.

“I didn’t know how dominant they were,” Sedillo Lopez said.

All told, oil and gas companies gave over $3.2 million to New Mexico politicians from both major parties in 2020, according to a report from the New Mexico Ethics Watch. Cervantes received nearly 17 percent of his 2020 campaign contributions from the oil and gas industry, totaling over $27,000. He didn’t respond to multiple requests for comment on this story and was also silent after being accused of obstructing environmental legislation earlier this year.

The industry’s reach stretches beyond campaign donations. Its power led to the demise of a bill that would’ve outlawed spills of produced water, a toxic byproduct of oil and gas drilling. In committee where the measure died, Cervantes blocked public comment on the measure but did give fossil fuel lobbyists a chance to explain why they opposed it, according to the New Mexico Political Report.

Oil and gas industry leaders have also been intimately involved in shaping the policies meant to regulate it – and even boasts about the number of edits it secures to new rules.

In a February presentation, the New Mexico Oil and Gas Association told its board it had secured significant changes to a proposed rule for limiting methane pollution. The state accepted more than 70 of the trade group’s redline edits, NMOGA said, according to records obtained by the Energy and Policy Institute.

The “process has been fruitful,” the group announced in a slide deck.

Among the fruits of NMOGA’s nearly $1 million influence campaign was greater leniency on “emergency” exceptions for venting and flaring – referring to the releasing or burning off of excess methane, a potent greenhouse gas.

“There’s not often a distinction between Democrats and Republicans when it comes to the oil and gas industry” in New Mexico, says Mike Eisenfeld, energy and climate program manager for the San Juan Citizens Alliance.

Equipment at a fracking well is pictured at Capitan Energy on May 7, 2020 in Culberson County, Texas. – For oil and gas producers in the world’s largest oil field, straddling the border between Texas and New Mexico, the losses due to the collapse of oil prices are colossal. Photograph: Paul Ratje/AFP/Getty Images

To an outsider, or even to a lifelong resident who has become accustomed to the state accommodating the oil and gas industry, its influence may not be obvious. It was forged decades ago with some of the earliest investments coming in the 1920s. But it grew rapidly over the last decade, when drillers began using a new technology–fracking–to access oil and gas they couldn’t reach before. Production in New Mexico boomed, mainly in the northwest around Farmington and in the southeast around Carlsbad. Last year, the state broke its oil and gas production records.

As drilling has grown, so have campaign donations and lobbying efforts. The industry gives roughly twice as much to New Mexico political candidates now as it did in 2010. The industry doesn’t discriminate by party. A PAC supporting New Mexico’s Democratic House Speaker Brian Egolf, a self-proclaimed “progressive champion” took over $180,000 from oil and gas interests in the 2020 election cycle. Egolf has defended the contributions and his environmental record.

“People who work on campaigns require to be paid. Radio ads and Facebook ads don’t pay for themselves,” Egolf said, “and until we have publicly financed campaigns, we are going to be required to raise private funds to run these efforts.”

But activists say the industry dollars have made it harder for them to push back and defend Latino and Indigenous communities. Growing outside of Farmington, the activist Yang Toledo, 19, would visit her grandparents’ nearby home on the Navajo Nation, and see oil and gas well pads in the distance. As early as the third grade, she remembers learning about oil and gas drilling safety precautions in school.

But it wasn’t until she was older, and had moved to Santa Fe to start high school, that she began tounderstand the history of the industry in her state.

In San Juan County, for example, which comprises part of the Navajo Nation, most of the population lives within a half mile of an oil or gas well, according to Earthworks. This exposes them to air pollution and causing high rates of asthma, particularly in kids. The county has also been home to major coal mines and some of the biggest coal-burning plants in the US West.

“I started learning about a lot of these industries that were contaminating, polluting and sacrificing Indigenous frontline communities for profit,” she said. “I began to see the bigger picture.”

One of activists’ most recent battles has been over the industry’s extensive methane pollution. One of the world’s largest clusters of methane pollution hovers over the San Juan Basin, where drillers release excess methane into the air or burn it off.

Methane is the main component of natural gas, and it is a heat-trapping gas that contributes heavily to the climate crisis. And methane from the oil and gas industry travels with pollutants called volatile organic compounds and toxics like benzene. VOCs contribute to smog, which reduces lung function, increases asthma attacks and causes premature deaths.

Last month, New Mexico finalized a rule to curb methane pollution. Drillers will have to capture 98% of their methane by 2026.

While some environmental advocates praised the goal, so did the New Mexico Oil and Gas Association, saying the rule “enable[s] our state to continue to lead in the safe, responsible production of oil and natural gas.”

Jeremy Nichols, climate and energy program director for WildEarth Guardians, said methane regulation debates are “borderline greenwashing” and often a distraction, which he speculated is why NMOGA likes the changes.

“It gives them a chance to claim they’re taking ‘bold’ climate action, when at the end of the day, all methane regulation does is condone more fracking,” Nichols said in an email. “While the specific rules that were adopted by [the state] were certainly an improvement from where they were, they still condone some degree [of] flaring and venting, which is just unacceptable.”

The industry’s support, after winning dozens of revisions to the rule, is yet another sign of how entangled state decision-makers and the industry have become.

Despite the significant influence of the industry, there are limits to its power. Last year, it backed a Democrat running for re-election to represent the southern half of New Mexico in the US Congress. The lawmaker lost to a Republican challenger, Yvette Herrell.

Its impact in the state is similarly checkered. For example, oil and gas production contributed about $2.8 billion to the state in fiscal year 2020, over $1 billion of which went toward funding public schools. The oil and gas association is running ads urging the public to oppose environmental restrictions on the industry for the sake of students.

However, New Mexico schools consistently rank among the nation’s worst.

Oil and gas also support tens of thousands of jobs, yet it can be tenuous employment. “The counties that produce oil and gas, they are in a perpetual boom-and-bust cycle,” said Janie Chermak, a University of New Mexico economics professor.

Younger activists are growing frustrated. Artemisio Romero y Carver, an 18-year-old student, lobbied at the capitol this year on behalf of the organization Youth United for Climate Crisis Action, or YUCCA, and watched as environmental legislation failed — from the fracking pause to the Climate Solutions Act to a bill aimed at protecting water from industry pollution.

“Leaving this session, I have never felt less hope for our government,” Romero y Carver said. “In the same year that California burned and Texas froze, the New Mexico state legislature [passed] no or very, very limited environmental protection legislation.”

Floodlight is a nonprofit news organization that partners with local outlets and the Guardian to investigate the corporate and ideological interests holding back climate action. This story is republished with permission.