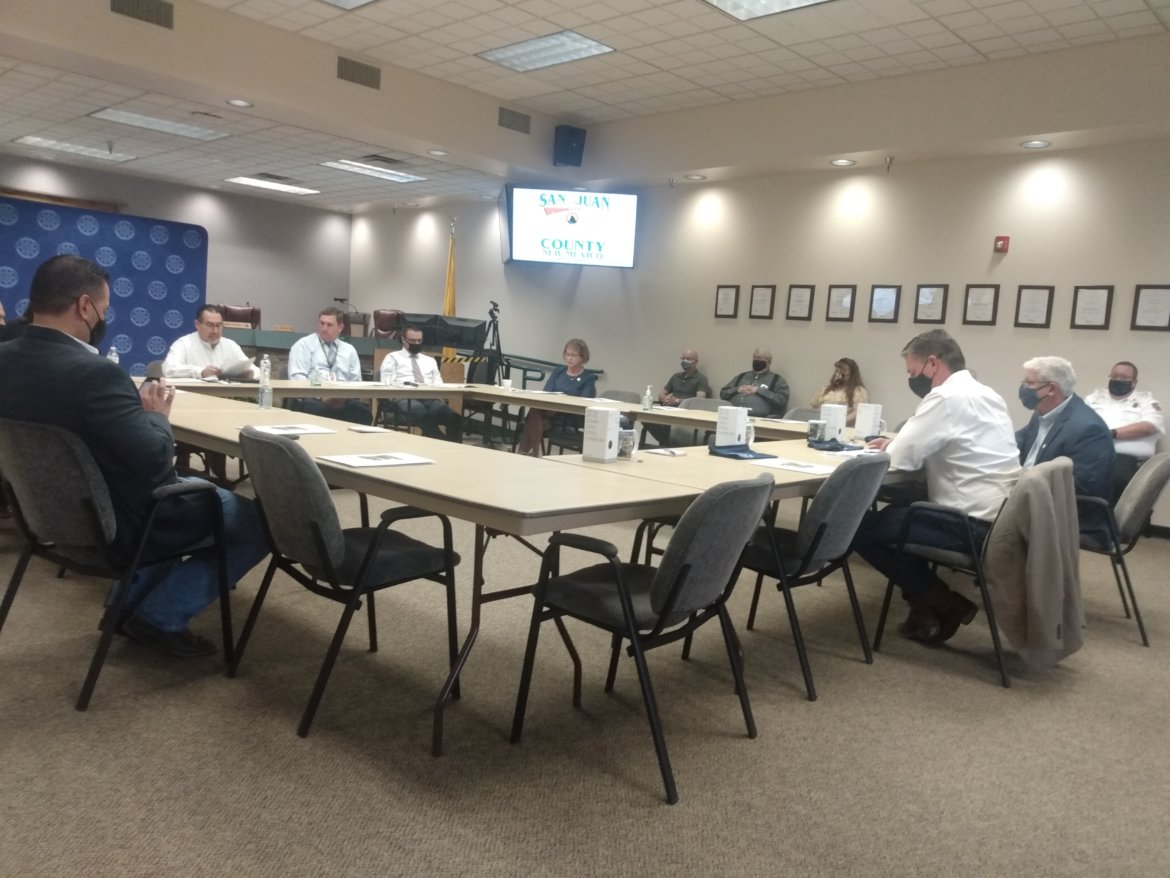 Sen. Martin Heinrich said this week reinstating methane regulations that former President Donald Trump rolled back will buy time to take the next steps to addressing the climate crisis.

The Senate approved revoking the rollback of the methane regulations about a week ago and the House of Representatives, where the Democrats have the majority, will consider the measure this month.

Looking forward, Heinrich, a Democrat from New Mexico, said a federal infrastructure package should have robust investments in things like transmission, which is needed to move renewable energy from one area to another.

“More and more of our economy is going to be run off of electricity as opposed to combustion,” he said. “That means we have to be able to move electrons from where we have renewable energy to where that energy is consumed. We don’t have enough transmission to do that today.”

Heinrich met with NM Political Report while in Aztec, where he presented a flag that flew over the U.S. Capitol to the San Juan County Emergency Manager Mike Mestas for efforts to combat the COVID-19 pandemic.

Much of the state’s existing transmission infrastructure is in the northwest, although there are projects in the south and central parts of the state that are centered around renewable development and—once completed—will carry electricity from New Mexico to other states.

Heinrich has sponsored legislation that would establish a tax credit for multi-state transmission projects. He said that will help with the financing side.

But transmission is only one of the initiatives he is working on to address climate change.

Agriculture as part of the solution

New Mexico has a lot of horticulture practices that use organic matter to build soil. Heinrich said that is part of the solution to address climate change and should be more accessible for farmers.

“We need to start thinking about how we can use the agriculture sector as part of the solution to our climate challenges,” he said.

He described it as giving the farmers some of the tools to solve part of the climate crisis.

Northwest New Mexico looks to ‘reinvent’ itself with hydrogen projects

Prior to the flag presentation, San Juan County Manager Mike Stark highlighted a few of the county’s ongoing efforts toward economic diversification, including a possible blue hydrogen project in the western part of the county.

Blue hydrogen uses natural gas, which consists mainly of methane, and separates out the carbon. The hydrogen can then be used to produce emission-free energy.

“I think your focus on this is really smart,” Heinrich said, highlighting the 45Q tax credits that are available for companies that capture carbon and either use it for enhanced oil recovery or sequester it underground.

Related: The retired Escalante Power Plant may be converted into a hydrogen plant

Prior to hearing from Stark, Heinrich told NM Political Report that he sees the San Juan Basin as a potential hot spot for hydrogen projects.

Later he told Stark that the San Juan Basin has the right geology, the access to transmission and the workforce to make hydrogen projects successful.

Heinrich has introduced legislation calling for an investment tax credit for green hydrogen, which uses electrolysis to produce hydrogen and does not rely on fossil fuels.

Stark said hydrogen could allow San Juan County to reinvent itself from being a fossil fuel energy hub to producing cleaner forms of energy.

Addressing the legacy of fossil fuels such as orphan wells

As the country moves away from fossil fuels, Heinrich said it is also important to address emissions from wells that are no longer in production, such as orphan wells. An orphan well is one where the company has gone bankrupt or an operator cannot be found.

“I think we need much more focus on orphan wells,” Heinrich said. “And we need to have the right tools in place to make sure that there is the funding to shut those wells in because if you don’t do that and you have a well that is leaking, it’s not leaking carbon dioxide. It’s leaking methane.”

That is important because methane is 86 times more potent a greenhouse gas than carbon dioxide, he said.

“I think there is so much more that we could be doing to make sure that we are not leaking methane into the air,” Heinrich said.