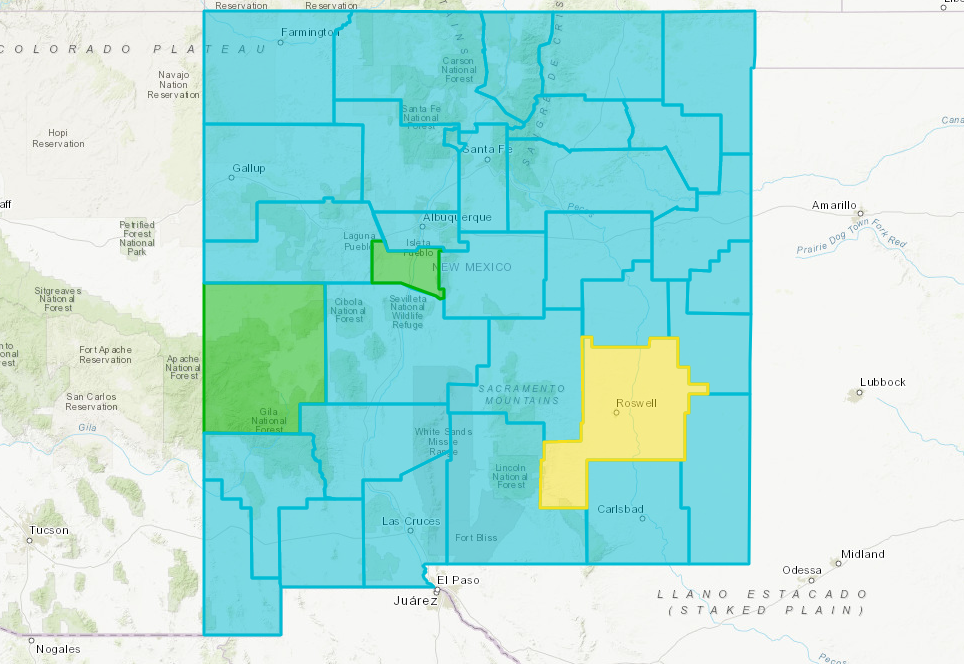 Screenshot of the state's red to green map as of the May 5 update.

Nearly every county in New Mexico, including the state’s most populous counties, are set to be in the turquoise tier, which has the least capacity restrictions.

He said that the success was largely due to vaccinations, but also easing of other criteria.

This signals an even wider expansion of the state’s reopening as vaccinations increase and as cases and hospitalizations remain at a plateau.

The advancement to turquoise could happen by either hitting all three guidelines on categories (fewer than 10 cases per 100,000 per day, a test positivity rate of 7.5 percent or below and a vaccination rate at or above 40 percent) or by being at the green level (which requires two of the categories) for two consecutive periods.

This second method is how counties like Bernalillo County, the state’s most populous, advanced to turquoise despite having more than ten cases per 100,000 residents.

Counties that reach turquoise will not be reevaluated until June 2, so the current level of restrictions will remain in place.

But the percentage of vaccinations needed to qualify for the criteria increases by five percent each week.

The three counties that did not reach turquoise were Valencia and Catron counties at green and Chaves County at yellow.

Scrase noted that the color system does not apply to sovereign nations like pueblos or tribes within the state.

The state remains focused on increasing the number of vaccinations—seeking to reach 60 percent of New Mexicans age 16 and older who are fully vaccinated to reach the level at which the state will lift all capacity restrictions.

As of Wednesday, 58.9 percent of New Mexicans had received at least one dose of a COVID-19 vaccine and 45.4 percent were fully vaccinated.

That number will likely increase with new changes and efforts.

“We are really leading the nation in getting those shots into arms and we’re really efficient, so I’m really proud of New Mexico,” Department of Health Secretary Dr. Tracie Collins said.

The FEMA Urban Mobile Unit and New Mexico Equity Travel Team, which is working with the state National Guard, each are programs that aim to get more vaccinations to underserved areas and to populations that have trouble getting vaccinations.

“I’m speaking directly to our primary care providers, please reach out to your patients, encourage them to get vaccinated and offer vaccinations to patients who are visiting you for other reasons,” Collins said.

“This is going to take everyone’s effort to get shots in arms,” she said.

This all comes as the state gets ready for a likely approval of emergency use authorization for those aged 12-15; those older are already eligible for the COVID-19 vaccinations.

“We’re, believe it or not, catching up from an unprecedented number of deaths that were referred to them in October, November, December and January,” Scrase said.

He said the numbers of recent deaths are “about one per day.”

One worry about the increased spread is about variants. The B.1.1.7 variant, also known as the UK variant, made up 45.8 percent of all tracked cases from March 21 to April 17 and are the majority of cases tracked nationwide.

This appears to be a variant that spreads easier than the B.1.2 variant, which is what was the largest spread throughout the country last year, but there have been no indications that it is resistant to vaccines or causes more hospitalizations or deaths.