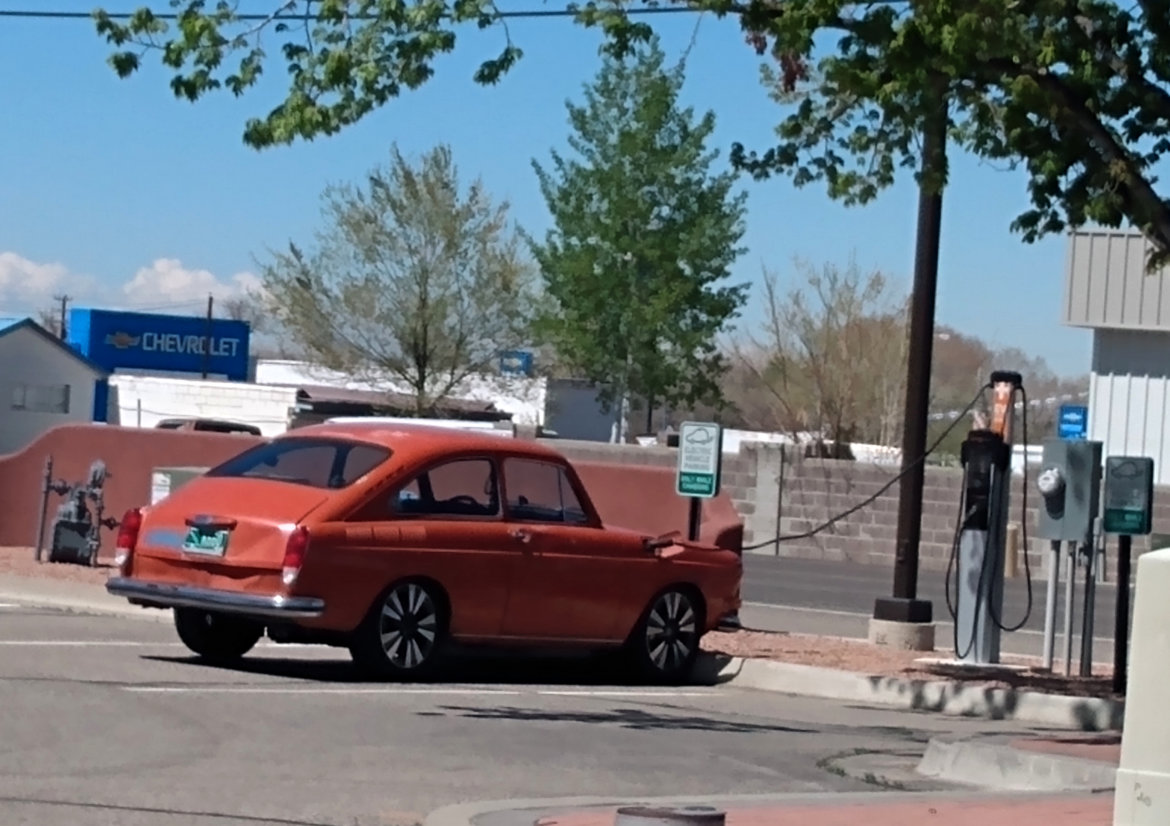 An electric vehicle charges at a charging station in Aztec.

While there may not be a lot of electric vehicles on the roads today, Kit Carson Electric Cooperative CEO Luis Reyes said his utility is taking steps to prepare for this to change in the upcoming years.

Hundreds of electric vehicle charging stations have been installed around the state and utilities are preparing for more.

Reyes said rural areas often lag behind when it comes to infrastructure of all kinds. He highlighted broadband gaps as an example. During the COVID-19 pandemic, students in rural areas with less access to broadband struggled with remote learning.

The cooperative is a smaller utility serving a relatively rural population where residents may be more hesitant to adopt the new electric vehicle technology. Reyes said some people have to drive 70 miles one way just to get to a doctor and other people require four-wheel drive trucks to get around on the dirt roads.

But that hasn’t prevented the utility from installing 13 charging stations that it owns and operates and Reyes said it plans to install six more this year.

Because of the unique challenges rural areas face, Kit Carson is working with community groups to determine the best locations for the charging stations and the best type of charging station to install. This includes conversations with city and county government, Pueblos and businesses.

“I’m good at building infrastructure, they’re probably better at the habits that tourists have or their local people have,” Reyes said.

The first charging station Kit Carson installed was at its headquarters, which are near shopping destinations. Reyes said it isn’t uncommon for him to see people using the charging station there.

The second charging station was placed at a park where children play soccer on the weekends. He said the chargers there are almost always used during those games.

PNM official: ‘New Mexico is witnessing the birth of a new transportation era’

Chavez said PNM has been an active partner with the state in those efforts and played a key role in designating the first alternative fuel corridors in the state. These corridors were approved by the Federal Highway Administration in 2020.

“New Mexico is witnessing the birth of a new transportation era and PNM is playing an active role,” Chavez said.

Additionally, PNM is seeking approval from the New Mexico Public Regulation Commission for its transportation electrification program, which includes $10 million to assist customers installing charging stations at their homes or businesses and for an outreach campaign to educate people about electric vehicles. Chavez said 25 percent of the proposed budget would be dedicated to low and moderate income customers.

De La Torre said in an email that 80 percent of electric vehicle owners charge their cars at home because it is the most convenient and typically the lowest cost option. However, he said with more people choosing electric vehicles, EPE expects charging infrastructure in its service territory will increase to meet the demands of customers. He said people who are traveling and drivers of medium and heavy-duty vehicles may not be able to charge their vehicles at home and would opt instead for a charging station.

Unlike PNM and Kit Carson, El Paso Electric does not own any electric vehicle charging stations. However, there are more than 100 independently owned charging stations in its service territory.

Like PNM, EPE has filed a transportation electrification plan with the PRC for approval. Its plan calls for residential and commercial rebates to incentivize people to purchase and install smart charging infrastructure in the region. The plan also calls for a customer outreach program to educate people about the benefits of electric vehicles and the rate options available. These rate options are designed to encourage people to charge their vehicles at times when there is less demand for electricity.

De La Torre also said EPE supported the New Mexico Department of Transportation’s application to designate U.S. Highway 70 between the interchange with Interstate 25 in Las Cruces and the border with Texas as an EV-pending corridor. This application received approval from the Federal Highway Administration in April, he said.