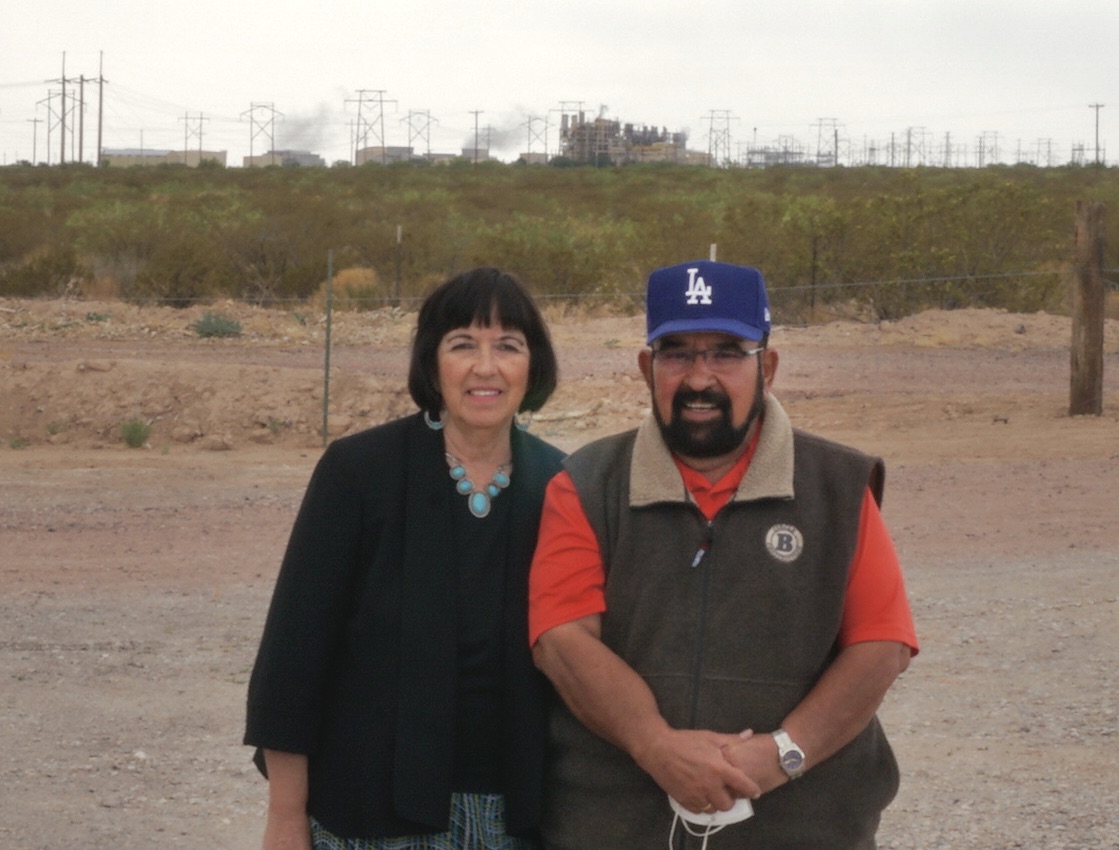 Ida and David Garcia outside their home, less than a mile away from the Newman Power station, in Chaparral, New Mexico.

When Ida Garcia looks out the kitchen window during cool mornings, plumes billowing from a power plant less than a mile away in Texas obscure her view of the broad Chihuahuan desert skies and expansive vistas. During hot summer days the plumes disappear but she still worries.

“We see that plant everyday,” said Garcia of the Newman Power Station that sits between Chaparral, New Mexico and El Paso, Texas. “We see how all this smoke comes out from the stacks… We know that it’s not just steam. We know it’s bad stuff coming out of there.

Garcia and her husband, David, live in southern New Mexico, a region with some of the dirtiest air in the country. Now, compounding Garcia’s concerns, the company that operates the facility wants to use natural gas to power the nearby plant for the next 40 years, rather than replace it with renewable, non-carbon energy.

“The bottom line is they are disrupting the ecosystem, the grass the cows eat, the food, the water, the homes that we live in; our livelihoods with the air that we breathe in …” David Garcia said.

The company is frank about the gasses the proposed new natural gas unit will pump into the air The pollutants include nitrous oxides, volatile organic compounds, and methane, which are common emissions from power plants.

The Garcias and others say technology advances allow companies like El Paso Electric to move away from fossil fuels now. And in New Mexico, a new law mandating electric companies use only renewable energy sources by 2045 led the state’s Public Regulation Commission to reject the  company’s permit application. But with most of its customers in Texas, the company is still pursuing the natural gas project.

With the company awaiting final approval by the Texas Commission on Environmental Quality, community opposition on both sides of the Texas-New Mexico border is gathering to stop it but chances of success are iffy.

Last weekend, residents and activists came together to strategize a plan of attack at next month’s preliminary hearing before the Texas commission.

“…it’s not going to be easy,” Sister Maria Teresa Tellez of the Sisters of Assumption in Chaparral told the group. “But, we have to remember we have to fight hard. It’s a struggle, but we have our dignity and we have to speak up because many, many children will be involved.”

The Newman power plant is at the far west end of the Permian Basin, the largest oil and gas reserves in the United States that straddles the Texas-New Mexico border.

Activists worry projects that expand the use of natural gas at such plants encourage long-term reliance on a fossil fuel that is a significant source of methane, a culprit in global warming. A recent study using satellite observations reported that the Permian basin has the highest methane emissions of all oil and gas regions in the U.S. The report said insufficient natural gas infrastructure in the region leaks gas through venting and flaring, releasing emissions 60 % higher than the national average.

But climate change isn’t the only worry. There is also increasing evidence that there is a connection between oil and gas production and respiratory illnesses in Texas and New Mexico.

Then there is pollution caused by power plants that burn fossil fuels like natural gas. While air quality in the region improved over the last 50 years, the American Lung Association ranks the El Paso-Las Cruces area 13 out of 226 metropolitan areas for Ozone emissions, which are bad for the lungs.

Power plants like Newman emit a key component of ozone: nitrous oxides, which are implicated in adverse effects to people with respiratory conditions such as asthma.

Air pollution from maquiladoras in Ciudad Juarez, the high traffic of diesel trucks crossing international ports of entry, a Marathon Petroleum Refinery, agriculture in the region and gasses emitted by Newman have long ravaged the area.

A study conducted by the New York University School of Medicine found that air pollution-related diseases caused an average of 59,658 missed work days and led to the death of 18 people a year in El Paso and Doña Ana counties.

In short, the El Paso region has an air quality problem.

Ida Garcia, a cancer survivor and head of the grassroots group Chaparral Parents in Action, has wondered if the existing plant could be affecting her health after doctors found an anomaly in her lungs, she said.

“When they did my x-rays (my doctor) was very concerned because he saw this little module in my lungs,” Ida explained. “I said to the doctor ‘where are those coming from?’ and he said ‘well it’s your environment… Then we started hearing about all these fumes that are in our air and I said to my husband ‘do you think that’s where I got it?’”

El Paso Electric currently operates four natural gas power plants that provide energy for El Paso and the region, including the Newman Power Station. The company’s proposed revamp of the power plant would include a new $157.6 million, 228 megawatt natural gas generator, dubbed Newman 6 to replace three older less efficient units. The company says it’ll save 600 million gallons of water a year. The company also plans to add 200 megawatts of solar power, with a 50 megawatt battery storage unit to their portfolio.

According to the company, Newman 6 is necessary due to growth in peak demand during the summer when area temperatures regularly exceed 100 degrees. It will replace current outdated units that were put in place in the 1960s before the federal Clean Air Act. The new unit is designed to accommodate use of renewable energy sources as they become more feasible, the company said, because it can be powered up or down on a daily basis, as needed, to supplement energy needs that can’t be met by renewables.

“Kind of like what you saw in the freeze recently,” El Paso Electric spokesperson George De La Torres said, referring to a deadly winter storm in Texas earlier this year. “The fact that we could use natural-gas, combined with solar, combined with nuclear is what really kept our units and our system reliable. It was adequate enough for this winter storm but what we deal with typically is the summer and the heat, and that’s what we’re really preparing ourselves for.”

The company speculates that Newman 6 may have the potential to be converted to run on hydrogen in the future, an emerging carbon-free fuel alternative.

“It is still very much in the very preliminary phases,” said De La Torres. “So that’s why we are creating a roadmap so we can look more into what we can possibly do.”

While hydrogen does not produce harmful emissions, critics say the technology is still in its infancy.

Area residents and clean energy advocates  say the company ought to invest instead solely in renewable energy sources, rather than natural gas, to make the air cleaner and to comply with New Mexico’s new Energy Transition Act, which mandates the state cease using carbon-based energy, like oil and gas, and fully adopt renewables.

With the companies’ service area reaching as far north as Hatch, N.M., El Paso Electric is governed by both the New Mexico Public Regulations Commission and the Public Utility Commission of Texas.

The New Mexico PRC denied El Paso Electrics’ application for the new unit in late 2020, citing their failure to consider the state’s new law that aims to gradually move New Mexico to 100% renewable energy by 2045.

There’s opposition in Texas as well. The El Paso City Council unanimously voted to oppose Newman 6 last fall, expressing concern about a cost increase for ratepayers and pointing to El Paso’s status as the 10th sunniest city in the world.

“We could be the Saudi Arabia of solar energy if we wanted to,” said El Paso City Council member, Peter Svarzbein.

Residents of El Paso have also expressed frustration with El Paso Electric after it was bought out by a private hedge fund owned by JP Morgan in a $4.3 billion deal. This transition turned the once publicly traded utility into a privately owned corporation.

“Chaparral is one example,” Escoto explained. “They’re a majority Spanish speaking and mixed status community that structurally has less of a political voice than for example, the Westside (of El Paso). This company is taking advantage of the structural inequalities to go ahead and build projects that are devastating for the community… It’s an injustice that they are being polluted because the state that they are adjacent to doesn’t have the type of clean energy requirements (as theirs).”

Tellez, of the Sisters of Assumption in Chaparral, said one of her biggest concerns is the health of the younger generation.

“Many mothers complained that their children were suffering from allergies, from asthma,” she said.

Doña Ana, Otero and El Paso counties are all considered medically underserved communities according to the Health Resources and Service Administration in the U.S. Department of Health. El Paso became a COVID-19 hot spot during the fall of 2020 as cases overwhelmed hospitals and morgues, exposing the inadequacies in the area’s healthcare.

The Garcias said they hoped the New Mexico commission’s decision to deny the permit would bring an end to the project. But De La Torres said the plant is scheduled to begin operation in the summer of 2023 pending approval from the Texas Commission on Environmental Quality.

“I do feel like we don’t have too much of a say because we’re not on the Texas side,” said Ida Garcia. “Even though we are trying really hard to make people aware of it, it’s like our hands are tied.”

She’s not far from the truth. The company indicated during December hearings before the PRC that they would continue with the project, on the Texas side, which accounts for 80% of their customer base. Even though New Mexico is less than a mile away from the plant, El Paso Electric will not be allowed to direct energy from Newman 6 to New Mexico without the PRC’s approval.