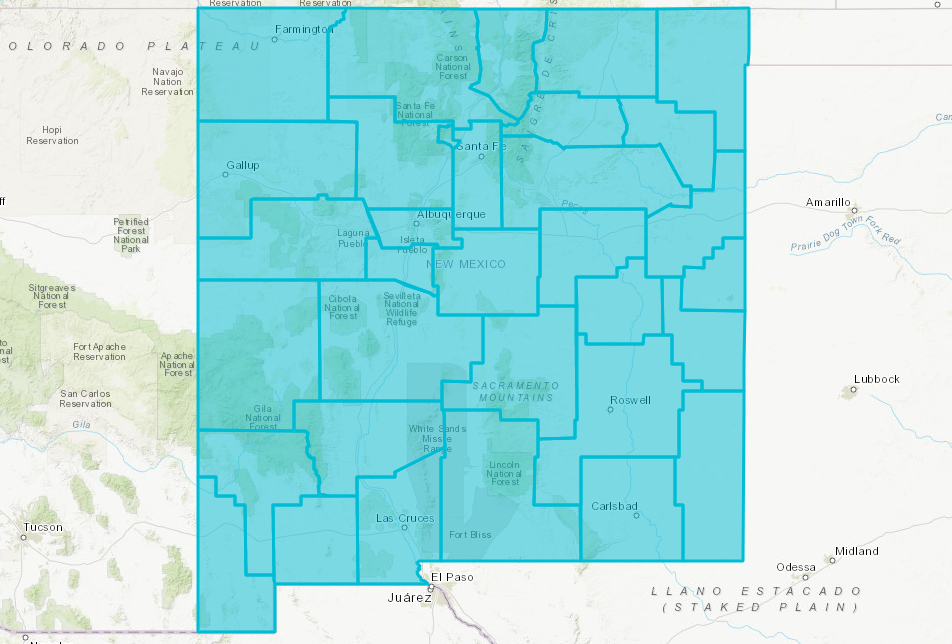 Screenshot of the state's red to green map as of the June 2 update.

Every county in New Mexico is now at the turquoise level, the least restrictive level of restrictions.

Those exceptional circumstances could include an unforeseen mass outbreak of COVID-19 infections.

Human Services Department Secretary Dr. David Scrase said this was because of not only improvements, but also changes to the way the state’s color-coded county-level restriction system works.

Without the changes put in place by the governor, according to Scrase, five largely rural counties would have been at the yellow level.

“The governor feels so confident in our vaccine efforts and so desirous of restoring economic balance to the state that she has generously put forth in the direction that Secretary Collins signed today in the public health order, that until we’re fully open, all counties will be turquoise,” he said.

The state has also seen improvements.

The entire state had fewer than 100 cases reported over the long holiday weekend. As of Wednesday, just 103 people were hospitalized for COVID-19.

Most restrictions will be lifted two weeks after the state hits 60 percent of the age 16 and older population with a vaccination. Vaccinations reach their full effect after two weeks of either the second shot of the Moderna or Pfizer vaccines or after one shot of the Johnson & Johnson vaccination.

As of Wednesday’s update, 56 percent of New Mexicans age 16 and older are fully vaccinated and 65.7 percent have received at least one shot.

One plan to increase vaccinations among those who are hesitant is a sweepstakes with a $5 million top prize. New Mexicans age 18 or older who are fully vaccinated and received at least one shot in New Mexico are eligible for the prize.

“There are many of us at the state who believe that we’re going to see the same sort of results in New Mexico like we saw in Ohio, and other places with a lottery, where a lot more younger individuals and people who live in more rural areas will step up and take the vaccine,” Scrase said.

Vaccine “breakthroughs,” or confirmed infections among those who completed their vaccines two weeks previous and did not have COVID-19 in the previous 90 days are extremely rare both nationwide and in New Mexico. As of April 30, data showed about 10,000 vaccine breakthroughs among those in 46 states and territories—a rate of 0.01 percent. In New Mexico, as of June 1, the number was just 696 out of over 900,000 New Mexicans who were fully vaccinated, or 0.074 percent.

Ross said just 67 people were hospitalized after breakthrough infections, and that investigation found just 15 were likely to be COVID-19 related. Additionally, eight deaths were identified among the “breakthrough” cases, six of which had COVID-19 as an immediate or underlying cause of death.