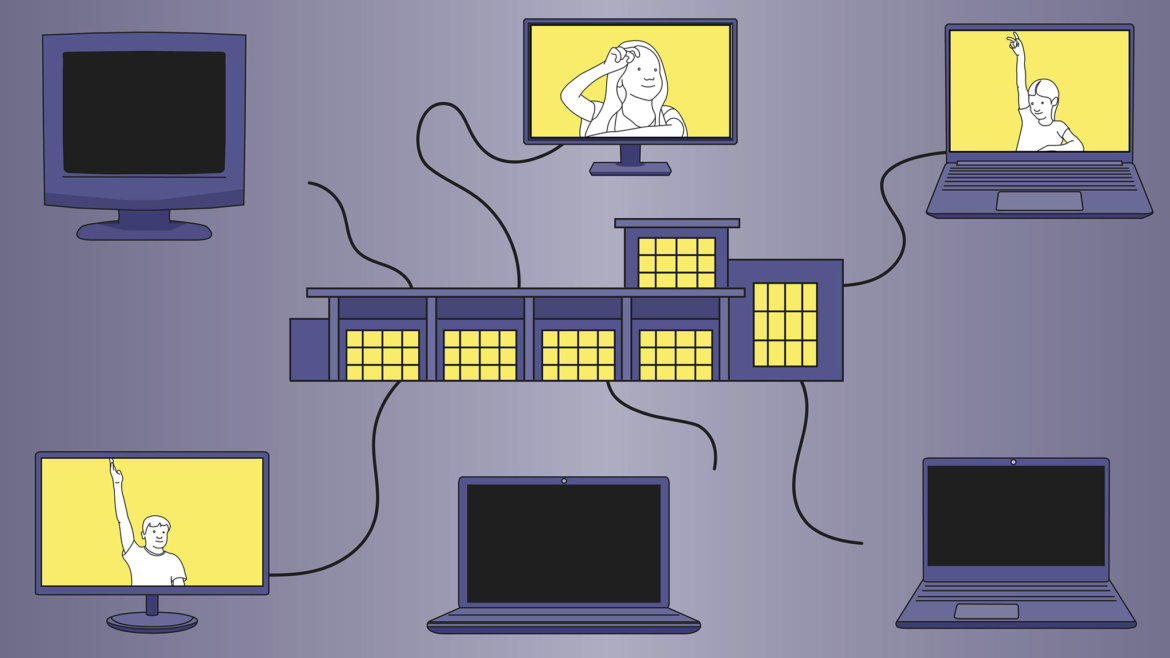 On May 18, a judge overseeing the historic Yazzie-Martinez case ordered the New Mexico Public Education Department to take stock of the massive digital divide in the state and finally identify the roughly 76,000 students who lacked Internet connections they desperately needed for school.

One of PED’s responses was to create a Google survey for students and staff to fill out online, an action that left advocates and school leaders mystified.

“It doesn’t make sense for a lot of different reasons — most of all because people who don’t have internet aren’t going to fill out an online survey,” pointed out Michael Noll, community schools coordinator at Peñasco Independent School District, whose students are among the plaintiffs in the suit.

The survey is just the latest back-and-forth in a seemingly endless seven-year legal battle over inequitable education in New Mexico, where vulnerable students receive such an inadequate education that they’re in danger of being irreparably harmed, the First Judicial District Court found in 2108. The court has retained jurisdiction over the Yazzie-Martinez case ever since, to make sure the state implements a litany of comprehensive, mandated reforms.

Three years later, the state has barely made any progress, critics argue. They say the online survey reflected a broad lack of foresight and basic understanding, especially in light of the state’s long-standing problems with internet access, which vastly undercut students’ ability to learn after the pandemic struck and classes went online.

As part of an emergency technology motion filed by the Yazzie plaintiffs in December 2020, superintendents from Gallup-McKinley, Cuba, Jemez Valley, Zuni, Grants-Cibola and Peñasco school districts wrote affidavits describing the depth of the problems. Between them, thousands of children, most of them Native American, were without access to computers or the internet at home, resulting in large numbers of “lost students.”

Jemez Valley Public Schools Superintendent Susan Passell reported that the district lost communication with 25 percent of the student body, or more than 90 kids, most from the Jemez or Zia pueblos.

Students, families, teachers and even school administrators “do not have Wi-Fi in their homes or access to broadband internet sufficient to download a single video-recorded lesson,” Passell wrote.

After a cataclysmic year of learning loss, the challenges facing at-risk students were made even greater by family illness and death, housing and food insecurity, and social isolation. Looking forward, educators say that any strides toward equity must address the profound rift — social, emotional, cultural, historical and academic — that only widened over the past year. The pressing lack of technology is but one of the many comprehensive steps needed to redress an education system in crisis, advocates argue.

And the demand for broadband and computers in students’ homes won’t end just because the COVID-19 pandemic has eased and in-person learning has resumed. Students need high-speed internet and digital devices at home so they can do their homework and acquire a sufficient education, as constitutionally required. To achieve equity, all students must have online access at home in order to thrive at school and beyond.

Technology is not a luxury, the plaintiffs argue. Without a computer and robust internet connection, students simply can’t succeed.

PED has touted many reforms since 2014, when two sweeping education lawsuits were brought against the state of New Mexico, later to be consolidated into the Yazzie-Martinez case. For the past seven years, however, the state has also been somewhat Janus-faced — boasting reforms on one hand and fighting them in court on the other. In March 2020, just as the pandemic presented New Mexico with perhaps its worst educational crisis in history, the state unsuccessfully tried to end the court’s oversight and get the action dismissed, arguing that it had “substantially complied” with mandated reforms.

The effort threw into question the state’s commitment to compliance in both the short and long term. In this light, the online survey and other belated efforts to collect comprehensive data on digital access are but symptoms of an agency that has not only resisted deep institutional self-reflection, but also exhaustive and inclusive transformation.

Not going for gold

The expectation that lower-income school districts will “just make do” with the minimum, Noll said, is a symptom of the large equity gap that allows wealthy schools with wealthy tax bases to offer greater learning opportunities than schools in impoverished communities with more students of color.

“Put it this way,” Noll said. “If students in a wealthier district couldn’t get online to do a project, their parents would be furious. But the solution for schools with lower income students “is make do, drill harder, work harder, get back to basics like testing, or just drive to a Wi-Fi hot spot and sit in your car,” he said. “And that’s where the inequity happens.”

That inequity has been staggering. Nearly 70 percent of Zuni Public Schools’ students — more than 900 out of 1,378 students — did not have internet at home or access to broadband, essentially locking them out of school over the past year of remote learning, the plaintiff’s technology motion said. Nearly 100 percent of students are Indigenous and low-income, or eligible for a free or reduced lunch. Desperate to attend class, some students drove to school and parked outside in search of a Wi-Fi connection. But even this didn’t work.

At the Cuba Independent School District, which borders the Navajo Nation, 36 of the 65 high school seniors, all of them Native American, were without broadband access. In the Grants-Cibola County Schools, the district “was not able to connect with some Acoma Pueblo, Laguna Pueblo and Navajo students who have no Internet connectivity.”

Gallup-McKinley County Schools went so far as to use the U.S. mail to send and receive homework packets, so that the few students with a computer and Wi-Fi wouldn’t have an unfair advantage over the many without. “Obviously,” stated Superintendent Mike Hyatt, “snail-mailing home packets is not a sustainable or sufficient education for our students.”

“It should not have come to this,” Rep. Derrick Lente, a vocal proponent of school reform, said of the pandemic’s impact on students from tribal lands and rural areas. When it comes to rolling out technology for schoolchildren, “the state should be responding as effectively as the rollout of the vaccine,” said Lente, who is from Sandia Pueblo and has sponsored some 20 bills to improve academic outcomes for Indigenous students. “It comes down to how we prioritize education here.”

Transforming the public education system requires a sea change in how the state values vulnerable students, said attorney Alisa Diehl, a member of the New Mexico Center on Law and Poverty (NMCLP) team that represents the Yazzie plaintiffs. An estimated 80 percent of students in the state could be considered at risk of academic failure; Diehl refers to them as “New Mexico’s truly diverse and culturally gifted student population” — children with enormous strengths and potential, who will thrive and bolster the entire state if they’re given the education they deserve.

But first, the state needs to provide it. When First Judicial District Judge Sarah Singleton issued her 608-page findings in 2018 — concluding that the state’s education system was so insufficient as to be unconstitutional — she ordered a voluminous series of programmatic, cultural and funding changes. Plaintiffs’ attorneys in the case, including lawyers from the Mexican American Legal Defense and Educational Fund and the NMCLP, have since offered the state an open invitation to come to the table and benefit from a rich base of knowledge held by parents, students, tribal leaders, community advocates and educators. “Our communities know what our students need,” said plaintiffs’ attorney Melissa Candelaria of the NMCLP, who is from the Pueblo of San Felipe.

The state’s continued lag in meeting the court’s directives suggests a preference for defending its position over doing what’s really needed — an overhaul of the entire public education system, said advocates.

Nonetheless, he went on, “We have taken swift and significant steps to make the needed transformative investments in our public education system, and we have every intention to continue that work. Many of the items, broadband as one example, are large and complex and aren’t going to happen overnight, but the work will continue.”

In a June 8 interview, Public Education Secretary Ryan Stewart said PED plans to ensure that all of New Mexico’s students — even those beyond the scope of the lawsuit’s original plaintiffs — will have access to internet and digital devices by the fall.

“By the time school starts next year, we want to have put every resource we can into making sure that every student in the state has what they need to participate, not only in the remote learning program, but also in the many other ways we utilize technology for learning,” Stewart said.

There’s no denying that PED has taken steps to close the digital divide. Since the pandemic arrived and schools closed in March 2020, the agency has distributed 6,282 Chromebooks; provided 102 Cradlepoint wireless routers and adapters; and, in partnership with the state’s Indian Education Division, allocated funds for 101 mobile hot spots and 700 residential hot spots in Indigenous communities, among other measures.

Today, PED is compiling data from its online survey and other data collection efforts, which will provide the “kind of granularity” needed to meet the court’s mandates, an agency press release said.

Stewart said the state also contracted with CTC Technology and Energy, a Maryland-based broadband consulting firm with a satellite office in New Mexico, to help students and educators secure federal funds for broadband. The firm will also implement a help-desk and direct outreach to families who lack internet access, he said.

In addition, the state Department of Information Technology created a complex digital New Mexico Broadband Map, to pinpoint Wi-Fi hot spots and provide other data. The map shows widespread connectivity in the state.

For the staff in rural and tribal school districts who spent an entire year trying to get students plugged into the internet, the reality looked much different. “It’s the difference between what’s theoretically possible and what’s practically available,” said Noll. Much of his rural Peñasco school district falls within Picurís Pueblo tribal lands, where coverage dead zones are common, for example. But the broadband map suggests there is service.

In one instance, Noll said, the map showed that fiber-optic cables ran near a home. But getting that home connected to the cable would have cost the family $10,000, just for installation.

The lack of resolution thus far means that the Yazzie-Martinez legal battle could continue into the foreseeable future. The state legislature this year sought a special appropriation for $1.25 million to cover ongoing legal costs. That comes in addition to more than $6 million in taxpayer money that the state has spent on the litigation since 2015.

With so much time passed, one of the young students named in the original lawsuit has already graduated from high school.