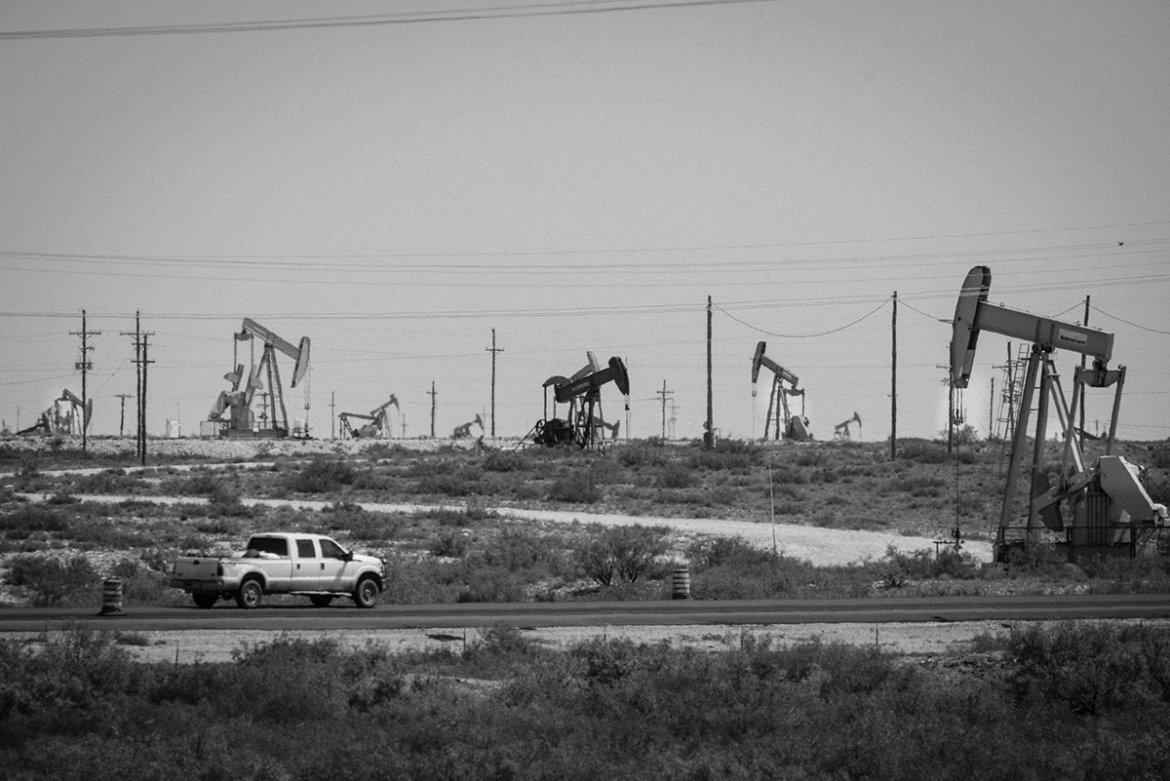 A few of the thousands of wells pulling up oil in the Loco Hills area of the Permian Basin north of Carlsbad, New Mexico.

In mid-June, a federal judge in Louisiana blocked the Biden administration’s 5-month-old pause on new oil and gas lease sales on federal lands and waters. But in New Mexico, where the state’s Democratic governor had requested an exemption to the pause, the tension over leases highlights how tricky it is for petroleum-dependent states to transition away from the historically rich revenue stream.

This story originally appeared at Capital & Main and is republished with permission.

It’s not yet clear how the judge’s order will play out, but the pause had already led to a dustup among state legislators and an unusual alliance across the upper levels of the state’s deeply polarized political parties.

“There’s not a whole lot of common ground, at least with myself and the governor,” says state Sen. Greg Baca, the Republican minority floor leader. “But on this one thing, I can agree that we need to continue these leases.” He is the lead signatory on a letter fired off earlier in June to the Biden administration and signed by all of the state’s Republican legislators. In it, they denounced an earlier letter two dozen state Democrats sent to the president.

Join our email list to get the stories that mainstream news is overlooking.
Sign up for Capital & Main’s newsletter and get more stories like this in your email.

State Democrats asked that the lease moratorium be kept in place to protect the environment and allow for further review of the leasing process on federal lands, crossing the state’s most prominent Democrat, Gov. Michelle Lujan Grisham.

“Just as our Democratic Governor requested in March 2021,” the Republicans wrote to Biden, “we respectfully ask that New Mexico’s fossil fuel production and any associated federal permitting and leasing activities be exempt from all future regulatory moratoriums.”

This put them squarely in line with the governor, an uncommon position for both.

In January, the Biden Administration implemented a pause on new oil and gas drilling leases on federal lands and waters across the United States. The stated goal was to give the administration time to review and possibly rewrite how the leasing process works as part of its overarching goal of tackling climate change.

They claimed that the pause overstepped the president’s constitutional powers and that it ran afoul of the Administrative Procedure Act, which governs how agencies develop regulations.

Judge Terry A. Doughty, whom President Donald Trump appointed to the U.S. District Court for the Western District of Louisiana in 2018, sided with the states and knocked down the pause.

In his ruling, he granted a preliminary injunction that “hereby enjoined and restrained” the U.S. Department of the Interior from implementing the pause on oil and gas lease sales on federal lands and in federal waters and allows the sale of new leases to resume.

During the Trump administration, industry stockpiled thousands of leases covering millions of acres, and drilling had not stopped during the pause. Doughty noted this in his ruling, yet wrote that states had “demonstrated a substantial threat of irreparable injury.” The pause, he wrote, would cause losses to the states, from which “they will likely not be able to recover.”

Erik Schlenker-Goodrich, executive director of the Western Environmental Law Center, and a lawyer who has argued many federal cases himself, says the opinion isn’t well reasoned.

Mostly procedural, he says the ruling showed Doughty’s “uncritical acceptance of industry revenue and economic arguments, and his failure to understand the public interest imperative” of the Biden administration’s action.

“Each one of those leases,” he says, “will only exacerbate the climate crisis.”

Schlenker-Goodrich says that executive actions like the leasing pause are critical to developing policy because “you’re not making the problem worse” as a review takes place.

He also said it is hard to argue irreparable injury in states like New Mexico, where producers have continued drilling on stockpiled leases and rising oil and gas prices have filled state coffers during the pause.

As of publication, it is not yet clear if or when the Biden administration will appeal the decision. And at a Senate Appropriations Committee hearing on Wednesday, Interior Secretary Deb Haaland said that the department’s review of federal leasing policy will be completed in “early summer.”

New Mexico had not joined the lawsuit; Lujan Grisham’s office said that they are reviewing the decision and do not yet have a response.

However the ruling plays out, New Mexico has a huge stake in the game.

In New Mexico, 55% of oil and gas wells are on federal land, and more than a third of the state budget relies on petroleum revenues. While the pause stoked worries that state funding would plummet if petroleum production were to take a hit, most economists said the worry was overblown, as long as this pause didn’t become permanent.

In a statement released on the day Biden announced the pause, Lujan Grisham said, “It is essential that climate change be prioritized.”

Yet in March, Lujan Grisham asked Biden to exempt New Mexico in light of both the state government’s reliance on oil and gas revenues to fund infrastructure and education and, ironically, the state’s work in curbing greenhouse gas emissions.

She pointed to the state’s investment in clean energy and in promulgating new rules aimed at dramatically curbing leaks and emissions from oil and gas operations over the next few years.

In the weeks before Doughty’s ruling, the governor’s office did not answer specific questions about the status of the request, but Press Secretary Nora Meyers Sackett said that Lujan Grisham is committed to “ensuring that New Mexico is not punished for its high concentration of federal lands.”

For months, the governor’s office generally kept quiet about the request.

Then, in early June, two dozen Democratic state legislators brought the exemption request back into focus with their letter to Biden.

“We write to convey our strong support for your pause and review of federal fossil fuel programs in relation to our country’s climate goals,” it read. “Planning for economic diversification and reducing the volatility of boom-and-bust cycles on our budget making is in the best interest of our state’s priorities.”

“I don’t fault the governor for it by any means, because she’s looking at the bigger picture,” says state Sen. Carrie Hamblen of Las Cruces. “I also have trust in the governor that she is aware of a lot more different inner workings than I even have access to.”

Hamblen, the lead author on the letter, says she’s not trying to “stop oil and gas.” Rather, she wants to start a conversation on how to move the state economy away from one based on oil and gas to something more diversified and stable, especially to shore up the state’s schools, which are chronically underfunded.

That conversation needs to be happening now. Otherwise, “It’s going to get kicked down the road again, and we’re going to be left scrambling” at the next oil and gas bust. Hamblen says that offering more leases as the state tries to wean itself from oil and gas revenues will only make the job harder.

“I think everybody would agree we need to have this conversation,” Hamblen says.

“The letter sent by some of the Democrat legislators regarding those leases is just outright irresponsible,” Baca says.

When told that Democrats weren’t calling for a halt to oil and gas production, Baca said, “I really don’t think that there’s a whole lot of argument there to say, ‘No, I support the revenue generated by oil and gas’ on the one hand, and then support policies such as suspending leases. It’s just silly.”

Meanwhile, New Mexico’s senators are looking for a fix from the U.S. Congress that does an end run around leases and pauses to ease funding worries.

In late May, U.S. Sen. Martin Heinrich (D-New Mexico) introduced the Schools and State Budgets Certainty Act of 2021. If passed, that bill would offer federal money to state, county and tribal governments as they transition away from federal fossil fuel revenues. Essentially it would make up the difference if Biden’s lease pause were to be reinstated or if other federal policies reduced state revenues from oil and gas extracted from federal lands.

The act is similar to the Secure Rural Schools and Community Self-Determination Act of 2000, which made payments to states and counties that lost long-term revenue from U.S. Forest Service and Bureau of Land Management lands. The bill was based on earlier legislation that reimbursed West Coast communities for lost revenues from federal logging bans enacted to protect the endangered northern spotted owl, and it expanded to include any county that lost long-term federal revenue from a change in similar regulations on federal lands.

Heinrich’s bill, co-sponsored with New Mexico’s other senator, Ben Ray Luján, creates “energy transition payments” for states, counties and tribal governments that would make up the difference between the year’s federal payments and a baseline calculated from previous years’ payments. The amount would decrease by 5% annually. In a written statement, Heinrich calls it “a predictable glide path” away from dependence on federal fossil fuel revenues.

Like its predecessor, this bill isn’t limited to New Mexico and could be applied to other states that lose money from a leasing moratorium.

Heinrich’s press secretary, Aaron Morales, said that the bill remains relevant in the aftermath of Doughty’s ruling. “The clean energy transition is happening,” Morales said, and the bill is one part of an agenda designed to help fossil-fuel-producing states transition away from those unstable revenues.

“[Heinrich] is kind of looking at the entire energy transition as like one big puzzle,” Morales said. “And this is a piece of it.”

While the New Mexico letter writing kerfuffle may seem like a tempest in a teapot, the background issue — climate change in New Mexico — definitely is not.

On the very same day that New Mexico Republicans launched their broadside against the Democrats’ letter to Biden, the Environmental Defense Fund released a report from the Permian Basin, which covers land in both Texas and New Mexico. The organization was looking for leaks of methane, the main component of natural gas and a highly potent greenhouse gas. The EDF found it coming from malfunctioning flares that vent unburned methane at a higher rate than previously thought, and it also found unexpectedly large methane plumes at midstream sites that pump oil and gas through pipelines. These are significant releases, especially for New Mexico, where oil and gas operations make up more than half of the state’s greenhouse gas emissions.

That same day, the Permian Basin in New Mexico sweltered under record high temperatures, nearly 20 degrees above average. That evening, the basin sat under a funky thick haze of fire smoke and smog from the oil and gas fields.

And the state of New Mexico as a whole is in the 13th month of the driest period in modern recorded history. Further, wildfires have broken out all over the state in the tinder-dry conditions. All of these weather events are reflections of the climate change brought on by the continued drilling of oil and gas.

“It’s a finite resource. We’re not going to be able to depend on that forever,” says Hamblen of the oil and gas pumped from beneath New Mexico’s baked soils. “And when you look at all of the climate change studies, we’re running out of time.”