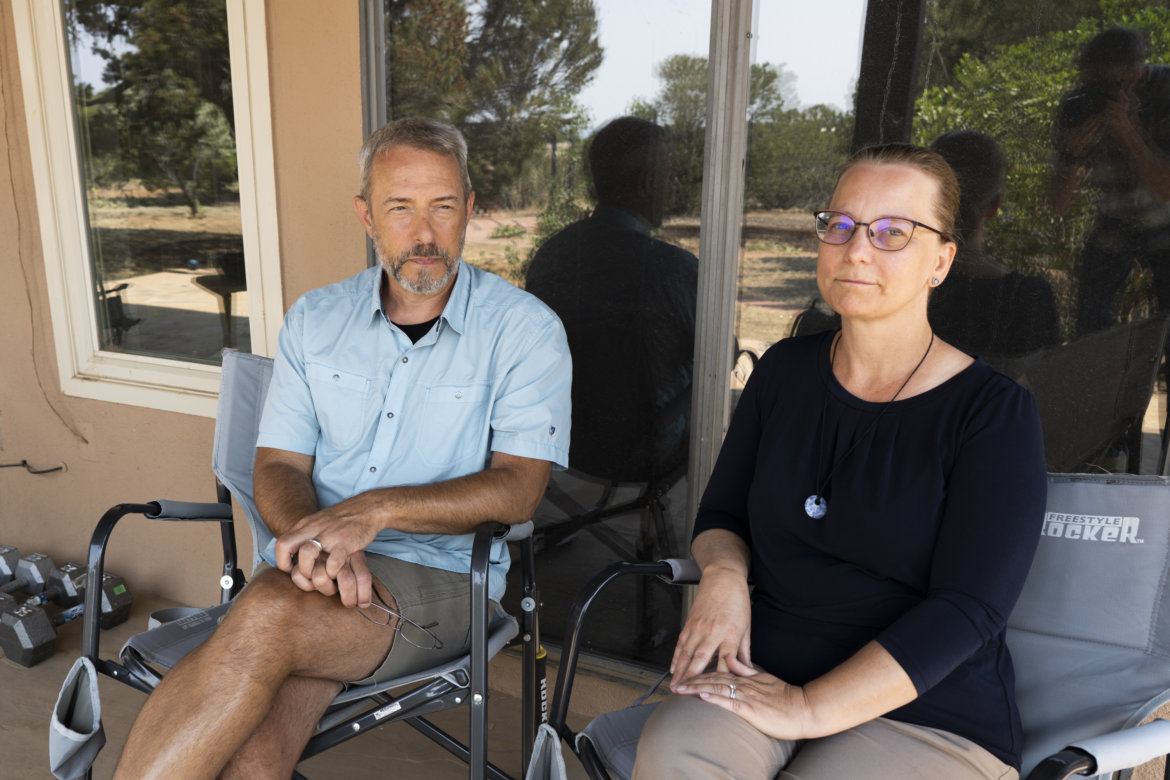 A husband and wife who blew the whistle on the state’s destruction of official records have filed a lawsuit against the New Mexico Children, Youth, and Families Department, claiming they were fired from their jobs in retaliation.

The lawsuit was jointly filed Tuesday by Cliff W. Gilmore, the former head of the CYFD’s Public Information Office, and his wife, Debra Gilmore, an attorney who led the agency’s newly formed Office of Children’s Rights. The suit, filed in New Mexico’s First Judicial Court, alleges that CYFD Secretary Brian Blalock and Deputy Secretary Terry Locke violated the state Whistleblower Protection Act by firing them for raising ethical concerns about a range of issues within the department.

“When we asked questions and offered perspectives [about CYFD policies], we were shut down and retaliated against,” Cliff Gilmore told Searchlight New Mexico.

“At the end of the day, my biggest concern is that children and families are being harmed by these practices,” Debra Gilmore added.

The CYFD has been under intense scrutiny in the wake of a report in April by Searchlight New Mexico, revealing that the agency used the encrypted messaging app Signal to communicate on a wide range of official state business — and then set those communications to automatically delete.

Legal experts say the practice likely violates open records laws and could hamper the ability of attorneys to represent children in state custody. New Mexico Attorney General Hector Balderas has directed his office to review the CYFD’s use of Signal, saying it is “highly concerning that public employees are potentially deleting public information without a thorough legal process.”

Prior to their firing on May 6, both Cliff and Debra Gilmore had repeatedly raised concerns within the CYFD about the practice, according to the lawsuit.

Cliff Gilmore is a Marine veteran whose previous experience included work as a communications officer with the U.S. Department of State and the U.S. Office of the Joint Chiefs of Staff. Debra Gilmore previously managed child welfare and poverty programs for the State of Oregon. Both were hired in late 2020 by the Lujan Grisham administration.

The lawsuit appears to be the first time that the CYFD has faced public claims of retaliation by such high-level officials. But employees and foster parents alike have long claimed the agency harbors a culture of retaliation against critics. In 2019, another CYFD employee filed a lawsuit under the Whistleblower Protection Act claiming she was fired in retaliation for her objection to certain department policies. In the most recent legislative session, a bipartisan group of state legislators introduced an oversight bill designed in part to curb retaliation within the agency; it never received a final vote.

The lawsuit alleges that the two officials had been raising concerns about the use of Signal within the CYFD since at least January 2021.

In one incident, detailed in a March 26 email to the State Personnel Office, Gilmore wrote that Blalock and Locke sent auto-deleting Signal messages instructing him to ensure that a candidate for a position within the public information office “make it to the final interview round, one way or the other.” Gilmore said the directive circumvented established hiring protocols, and expressed alarm about Blalock’s interference — alleging that the CYFD was using Signal’s disappearing message function “specifically to avoid potential IPRA requests.”

On April 5, Gilmore sent a formal complaint to the Office of the Governor, alerting the executive branch to the CYFD’s use of Signal’s disappearing messages and expressing concern over Blalock’s use of the platform to interfere in the hiring process. On April 22, he sent a memo to senior CYFD leadership stating that the practice was “detrimental to the credibility of and the public’s trust in government institutions and their leaders.” He advised that the agency immediately halt its use of the app.

Prior to her firing, Debra Gilmore also repeatedly raised concerns about Signal and a range of other issues. One of those issues centered around what both she and her husband viewed as a questionable $4.5 million software contract. Another involved the CYFD’s practice of allowing private contractors to supervise employees and conduct performance evaluations — a violation of state law, according to the lawsuit.

On April 17, 2021, she filed an official internal complaint reiterating her concerns and claiming that Blalock and Locke were retaliating against her for raising these issues.

Just weeks later, both Cliff and Debra Gilmore were fired.

“This is, in our experience and opinion, one of the most egregious cases of retaliation in

government,” said Bryan J. Davis, one of the Gilmores’ attorneys, in a press release issued Thursday.

In fact, both the CYFD and the Office of the Governor have a longstanding policy of routinely deleting text messaging communications. In August 2020, a complaint filed with the Office of the Attorney General alleged that the department was directing staff to communicate using the messaging platform Slack, and systematically erasing conversations.

In its official guidance, Gov. Lujan Grisham’s legal department advises employees that “Every single text message that you send or receive likely qualifies as a ‘transitory record.’ … We recommend that you delete all text messages which are ‘transitory records’ every ten days. You may delete them more often if you wish.”

The CYFD discontinued its use of Signal in April and now uses the Microsoft Teams app, a platform used by the Office of the Governor and other state agencies. However, many communications on Microsoft Teams have also been set to auto-delete after 24 hours, according to an email from the New Mexico Department of Information Technology obtained through an IPRA request.