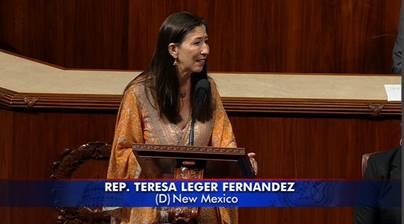 The U.S. House of Representatives voted 229 to 191 on Friday to reinstate methane regulations implemented under President Barack Obama’s administration and rolled back by former President Donald Trump.

The House’s vote comes after the U.S. Senate voted in late April in favor of the measure, which is intended to reduce the methane emissions from the oil and gas sector.

A dozen House Republicans broke party lines and voted with the Democrats in favor of the resolution.

Of New Mexico’s congressional delegation, U.S. Rep. Yvette Herrell, a Republican, was the only one to vote against restoring the methane rules.

Members of the environmental advocacy community in New Mexico praised the vote.

“As frontline community members in the Permian we experience everything that methane pollution has to offer,” said Kayley Shoup of Citizens Caring for the Future, in a statement. “We are living through drought, record breaking temperatures, and are exposed to emissions that hurt our health every single day. We are grateful that Congress is moving to protect frontline communities such as ours. In doing so they protect not only us, but also our planet from further climate catastrophe. We hope they choose to take even bolder action in the future in order to meet the magnitude of the moment we are living through.”

Methane is a potent greenhouse gas that contributes to climate change and is released into the atmosphere during routine venting as well as from leaks in infrastructure. It is one of the key components in natural gas and proponents of the methane rule say capturing more of the methane can also lead to increased revenue for the state.

“We have a moral and ethical responsibility to care for our communities and their health, for sacred creation and future generations,” said Sister Joan Brown, a Franciscan Sister who is the executive director of New Mexico Interfaith Power and Light, in a statement. “For too long methane pollution from oil and gas industry has caused health problems and has been a large contributor to the climate crisis.”

She called the methane rules to reduce emissions from the oil and gas sector “responsible stewardship.”

Following the vote, U.S. Rep. Teresa Leger Fernandez wrote on Twitter about the drought and wildfires impacting the western United States, which have become more severe due to climate change.

“Methane pollution is accelerating the pace of climate change and harming our communities’ health,” she tweeted.

This echoed some of the remarks she made on the floor prior to the vote.

She highlighted high levels of methane pollution in both the Permian and San Juan basins and said New Mexico also has some of the highest levels of childhood asthma rates.

She further spoke about the commodity value of methane.

“Every bit of methane that is released is wasted. It is wasted,” she said. “It is a valuable resource that is released into the air through methane venting, through flaring, and simply because they have not maintained their sites. But methane that is released and flared and leaked is also a resource upon which my state cannot collect severance taxes, upon which my state cannot collect royalties. So when that methane is leaked, flared and vented, those same children who are suffering from those high asthma rates, they lose the resources that should go into our public education.”

“Methane is a leading cause of climate change and emissions standards play a key role in protecting our air and water,” she tweeted.