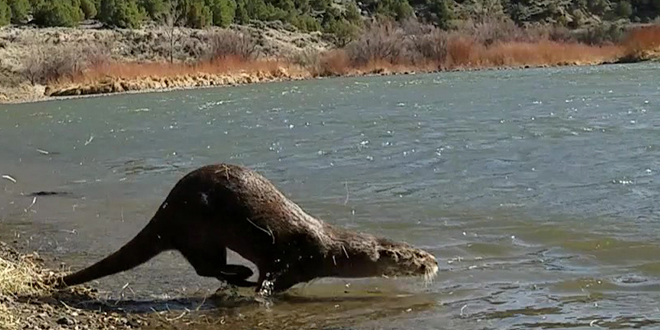 River otters captured in Louisiana were released in the Rio Grande.

While various environmental advocacy groups are pushing for river otter reintroduction in the Gila River basin of New Mexico, biologists say this could impact several sensitive fish species that the New Mexico Department of Game and Fish has been working to protect and recover.

These fish once coexisted with the river otters in a natural ecosystem and Michael Robinson with Center for Biological Diversity said they could live together once again. But one of the questions that the New Mexico Department of Game and Fish must grapple with is whether the ecosystem as it is today can support both the sensitive species of fish and the otter.

Tristanna Buickford, a spokesperson for the department, said there is not a timeline in place for the river otter reintroduction effort and the department is currently exploring the possibility. She said more studies will need to be done.

Lessons from the Rio Grande

If river otters are reintroduced to the Gila, lessons from other introductions could be applied including the reintroduction of otters to the Rio Grande near Taos.

The reintroduction effort took place when the department introduced 33 otters from Washington from 2008 to 2010. That population has now expanded to about 200 otters in the Rio Grande. However Stewart Liley, the chief of the department’s wildlife management division, told the Game and Fish Commission this month that the genetic diversity of those otters has declined.

That led to Game and Fish bringing seven otters captured in Louisiana to New Mexico to be released into the core population area to expand the genetic diversity.

Liley said that if the state is going to reintroduce river otters into the Gila River, more otters need to be introduced with greater genetic diversity. That means capturing otters from several different places in the country and releasing them in the Gila River.

The Gila River is isolated from other otter communities and the closest population of otters is in the Verde River near Phoenix.

Proponents of otter reintroduction say that the small predator could help control invasive species like crayfish and bullfrogs that prey on young fish. But Kirk Patten, a fisheries biologist, told the Game and Fish Commission last week that the otter could also prey on larger native fish like the Gila trout and native chubs. He emphasized that the Gila River and the Rio Grande are very different systems. There are more introduced fish species in the Rio Grande for the otter to prey on.

However, there is a portion of the Gila River where there are not as many sensitive species and fish like channel catfish live for the otters to eat.

Robinson, a senior conservation advocate for Center for Biological Diversity, said the river otter could potentially prey on Gila and headwaters chub, which some scientists believe should be grouped together as roundtail chub following a genetic analysis completed by the Arizona Department of Game and Fish a few years ago.

The Gila and headwaters chub are considered endangered species, although that could change if they are classified as roundtail chub.

Robinson said if the river otters are reintroduced it must be done in a way that does not imperil the chub populations.

He said the Gila River is a good location for river otters because “compared to almost anywhere else in the lower 48 states, the headwaters of the Gila River are a remarkably untrammeled landscape.”

Robinson said before Game and Fish makes that decision, the species recovery plan for the Gila chub should be updated. This has been delayed amid the discussions of classifying Gila chub as the same species as roundtail chub.

He said it would be good to have “more fish in more places” so that those species would have more resilience to predation.

“River otters probably will at some point or another kill some of them,” he said.

He said he would recommend if the otters are reintroduced a small number should be released downstream in the Gila Bird Area.

This would give space between the headwater chubs and the river otters. He also recommended monitoring populations of Gila chub in Turkey Creek, a tributary of the Gila River. Turkey Creek has a dry section seasonally between it and the Gila River, which could decrease the chance that the otters would move up the creek.