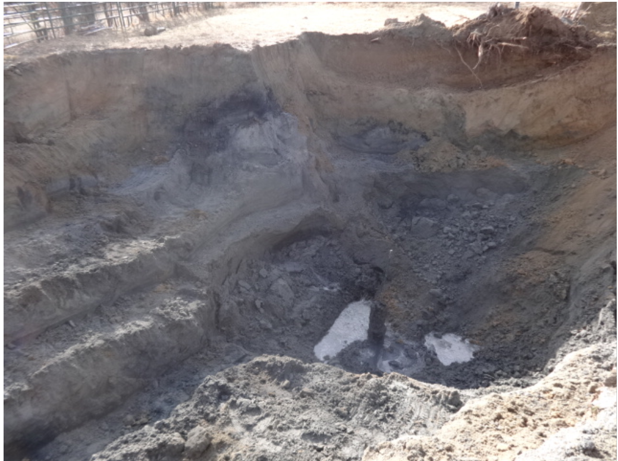 An orphan well site is seen prior to being plugged.

The Oil Conservation Division of the state’s Energy, Minerals and Natural Resources Department regained the ability to fine oil and gas companies that were not complying with state laws a little more than a year ago, and officials say this has paid off.

Since February of 2020, the OCD has filed 23 complaints, resulting in $263,000 in penalties that go to the state’s general fund, according to a press release from EMNRD. Of those complaints, nine have been resolved.

These complaints are only the formal enforcement actions that assess penalties against operators. In addition to those complaints, the OCD also issues field citations. These citations identify problems in the field and require the operators to follow-up and immediately solve those issues.

One reason that these actions are important is that some of the complaints could reduce the number of oil and gas wells that become orphaned in the future. Orphan wells occur when a company goes bankrupt, leaving the state to plug the well. Often the wells are idle before they become orphaned.

Of the actions taken during FY21, 13 complaints involved operators who were not in compliance with the requirements for inactive wells and financial assurance for nearly 200 wells, according to a press release.

In addition to the citations issued, the OCD plugged 49 orphaned wells in fiscal year 2021, which began on July 1, 2020 and ended Wednesday. The average cost of plugging each well is $35,000.

“In the past two years the OCD has reinforced its commitment to compliance and that has only accelerated in the past fiscal year,” said OCD Director Adrienne Sandoval in the press release. “Compliance actions and orphan well plugging requires hours of work across the Division and I’m proud of the work done by our team to identify necessary actions and see them through to the end. Our continued work to modernize the Division and work efficiently is paying off.”

Prior to 2020, the OCD had an 11 year gap when it had been unable to issue fines to oil and gas companies for not complying with state laws. A provision in a law that passed during the 2019 legislative session returned that ability to the OCD.