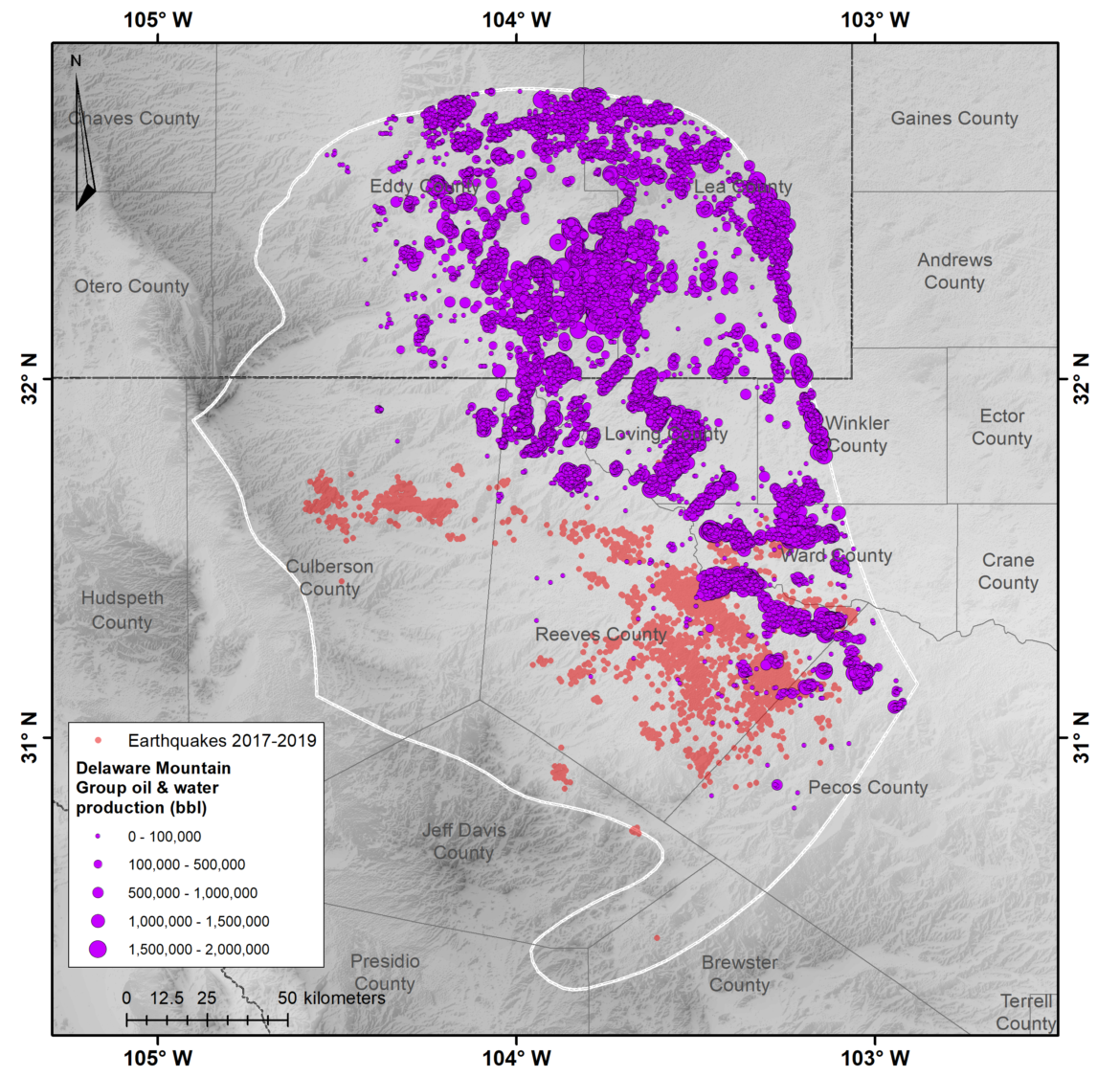 A graph from a study published in Geology shows earthquakes in the southern Delaware Basin occur where there has been no historical production from the Delaware Mountain Group.

When looking for places to sequester carbon, old oil fields may be a promising choice, according to a new study published in the journal Geology.

Geophysicists from Stanford University analyzed the Delaware Basin – a sub-basin of the Permian Basin in western Texas and southeastern New Mexico – and found that injecting substances into older oil fields is less likely to cause earthquakes than if the substances are injected into a newer oil field.

The geophysicists, No’am Dvory and Mark Zoback, noticed that the southern part of the basin had more seismic activity than the northern part, which has a long history of extraction. The seismic activity is primarily connected to salt water disposal, which occurs throughout the basin, according to Dvory.

After creating models, the duo discovered that pore pressures in geologic formations in the northern part of the basin were lower. Meanwhile, in the southern part where extraction has not previously occurred, there were higher initial pressures, leading to earthquakes when fluids are injected.

“Analyses such as this will be essential in evaluating the potential for long-term sequestration of CO2 in depleted oil and gas reservoirs and thoroughly evaluating potential seismic hazards,” the study concludes.

“Understanding the geomechanical state of the reservoir is really crucial for this kind of injection,” Dvory, the study’s lead author and a postdoctoral researcher at Stanford, said during an interview with NM Political Report.

He said the study is important because it will help people make decisions about carbon storage amid a push to reduce emissions. He said the findings likely hold true for other basins as well.

“If the United States, and actually all of the world, is heading toward carbon storage, once you inject carbon, there might be earthquakes,” he said.

Dvory said he believes the results of his study can be applied to other basins as well where there has been extraction. But that doesn’t mean every reservoir can be used.

Dvory said an injection well drilled to one level of the subsurface could be done safely without triggering earthquakes while if it is drilled to another level it might.

“You need to be real careful in how you make these kinds of decisions,” he said.

Dvory said people need to understand the natural state of the formation, including natural levels of pressure, as well as how those stress factors have changed over time before they decide to inject carbon dioxide into an underground reservoir.

Robert Balch, director of the Petroleum Recovery Research Center at New Mexico Institute of Mining and Technology said. Balch was not involved in the study, but has a doctorate  in micro-earthquake seismology and has studied the small earthquakes in the state. He read the study prior to speaking with NM Political Report.

Transporting carbon dioxide is expensive and requires pipelines, Balch said. Because of that, most companies and developers working on sequestration projects are looking for an area close to where the carbon dioxide is captured to drill injection wells.

“When you inject the CO2 into the rock formation, over time, it can build up some pressure, and that would make it more likely for a micro-earthquake to occur,” Balch said.

However, he said the study indicates that if there is an area with depleted oil and natural gas fields, it reduces the risk of earthquakes caused by injection.

Balch said he found it interesting that the study indicated relieving the pressure from formations above the ones where fluids are injected still helped reduce risk of earthquakes.

Injection-caused earthquakes in New Mexico are usually too small to be noticed.

“It’s very rare that you would have something that people would feel even if they were standing directly above it,” he said.

In contrast, Oklahoma has seen larger earthquakes caused by injection due to the type of geology where the faults are predisposed to earthquakes even without fluid injection.

Balch said the potential for earthquakes does not mean that injection is dangerous or should be avoided. He said any carbon storage project will analyze the geology to determine what pressures could lead to earthquakes.

“You’ll manage the pressure so you don’t end up in that situation,” he said.