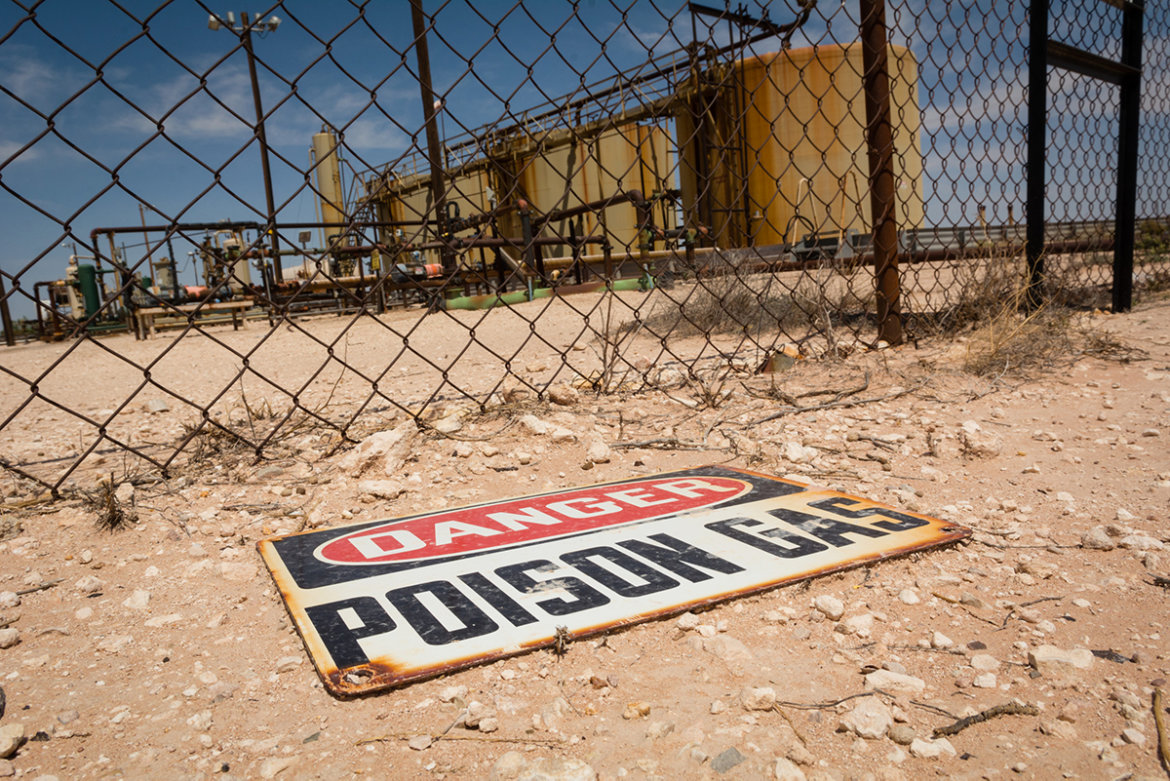 A tank battery and wellsite operated by Apache Corporation in the Loco Hills area of southern New Mexico.

“Oh my gosh. It is just cranking.”

Nathalie Eddy, a field advocate for Earthworks, the environmental monitoring group, is sitting in her Jeep next to an oil well southwest of Loving, New Mexico, in the Permian Basin. A tangle of well pumping equipment is on one side of the quarter-acre pad. Ten yards away are eight storage tanks, each about the size of a Greyhound bus standing on end. She’s aiming her camera at the top of one of those tanks.

“This is really bad.”

On the camera, psychedelic, multicolored waves roil the screen as they pour from a vent pipe atop a tank. Though only the pipe is visible to the naked eye, Eddy’s camera records tiny variations in heat, allowing it to “see” what else is in the air besides air. In its viewfinder, invisible clouds of hydrocarbon gasses become startlingly real.

“Are you smelling things?”

This story was originally published by Capital & Main and is republished here with permission.

Kayley Shoup, the local head of Citizens Caring for the Future, says, “Oh, yeah.” Her group works to protect the air, water and public health, and she’s driving as Eddy films. Because they’ve been threatened in the past, now they work together for safety.The droning metal grind of diesel powered well compressors and pumps, the searing blast of record breaking heat, and the thick, blooming reek of fossil fuels fresh from the earth all pour in the open window. It’s the thick, clinging scent of a chicken coop full of rotten eggs, doused in kerosene.

It’s not clear who owns the site they’re looking at. There is no sign posted — as required — naming the operator, latitude and longitude and well name. Eddy later finds it belongs to BTA Oil Producers, LLC, of Midland, Texas, which has reported 175 unapproved gas ventings and 16 oil and fracking water spills since the start of the year.

More multicolored vapors appear from other pipes — Eddy thinks they are pressure relief valves — on other tanks as she pans the camera. Each is venting straight into the atmosphere.

The carbon in these hydrocarbons last saw sunlight 275 million years ago during the Permian geological period as living matter in a primordial sea. Over the ages, the ocean life died and settled, sediments covered it, and tectonic motion compressed, folded and transformed it into a new sea of petroleum deposits more than a mile below where southeast New Mexico meets Texas.

Eddy records and reports leaking oilfield equipment, and she shares that information locally so people understand what happens in their backyards, spurring policy reform for oil and gas production. She does this from Texas to Colorado, and while some states have rules to rein in emissions, she keeps finding leaks as production increases as the country opens up again following pandemic closures.

Nathalie Eddy uses an infrared camera to record emissions from a series of tanks operated by BTA Oil Producers as she monitors wells for emissions in the Permian Basin.

Eddy has returned to this site repeatedly in the last week and earlier in the year. She returns to see if earlier emissions were one-off events, or if oilfield crews have repaired what’s leaking. She plans on reporting her findings to the New Mexico Environment Department (NMED) when she gets home.

“This is saving the worst for the last day in the Permian,” she says. The next day she will head home to Colorado to file reports and post videos. Shoup will resume work in nearby Carlsbad, talking about the fumes leaking from the wells that pepper this part of the state. But the basin will continue to bake and oilfield machinery will continue to hum and leak, and there will be two fewer people to monitor those emissions.

And there aren’t that many people monitoring to begin with.

New Mexico is increasing its monitoring programs to control oilfield emissions, and the state has two new sets of rules to plug the leaks and stop the venting that Eddy and Shoup saw. One set recently came online and another is in its final stages of approval. But it will be years before either is fully implemented. And the state’s oil and gas wells are pumping out vast amounts of greenhouse gasses right now.

A study published in Science Advances of satellite measurements in the Permian Basin showed that new facilities are responsible for up to 53% of emissions and “put current practices into question.” Another satellite-based study of the area published in Environmental Science Technology found that massive emissions can be highly intermittent and hard to track without continuous monitoring.

After years of meetings and legal wrangling, New Mexico’s main agency governing the oil and gas industry in the state, the Oil Conservation Division (OCD), implemented new rules in May to curtail nearly all venting and flaring of hydrocarbons “from the wellhead up to the processing facility, and any infrastructure really in between: pipelines, compressor stations, central tank batteries, pig launchers (and) receivers,” says Adrienne Sandoval, the OCD director. She touts the rules as some of the most stringent in the country, but they rely — heavily — on the industry monitoring itself.That’s in part because there are more than 55,000 wells pumping oil and gas and only 12 OCD inspector positions, two of which are currently unfilled.

The other state agency, NMED, fields another seven inspectors from its office in Santa Fe to monitor other emissions related to hydrocarbon extraction.

The OCD rules demand a 98% reduction in leaks and emissions by 2026, and companies are required to incrementally decrease emissions while increasing their monitoring regimen. How operators reach that goal is largely left up to them, with approval from the division.

Nathalie Eddy uses an infrared camera to monitor wells for emissions as Kayley Shoup looks on.

Eddy questions how that will work as recent reports show fewer people working in oil and gas fields than before the pandemic.

“To me that means there are a lot less boots on the ground, less eyes on issues, less human capacity to be checking these sites with any regularity,” she says. “I know what it looked like when there were 30% more workers in the field, and they still weren’t staying on top of things.”

Maddy Hayden, director of communications at NMED, says that the department isn’t surprised by the continuing reports of massive greenhouse gas emissions from wells across the state.

“This is why it’s so critical for the Environment Department to move forward with rulemaking this year,” she says. “It’s clear that voluntary measures by industry are not cutting it.”

Those rules await final approval by the state’s Environmental Improvement Board (EIB) sometime this fall before they could go into effect in 2022.

Even though both sets of rules were years in the making, widely reported on and written with input from oil and gas representatives and their lawyers, industry boosters in the New Mexico Legislature seem surprised by their existence.At a state Legislative Finance Committee meeting about the oil and gas industry in late June, several state legislators lit into Sandoval for the new OCD rules and forms operators are now required to fill out online.

State Sen. Crystal Diamond, a Republican representing a non-oil-producing part of the state, castigated OCD, calling the rules “overregulation” that “creates outlaws out of the good guys.

Donkey wells pull up oil next to a lit gas flare in the Permian Basin south of Lovington, NM.

Other state senators from oil-producing regions piled on with complaints from producers who said they hadn’t heard of the new rules until they were implemented.

After each complaint, Sandoval reiterated that the rules came after years of meetings with oil and gas representatives and other community members — they were not sudden, unannounced creations of her department.

Some legislators also proposed reviewing the pending NMED rules before they are reviewed and approved by the EIB.

Democratic state Sen. and Finance Committee Chairman George Muñoz, whose district covers the San Juan Basin, the state’s smaller oil and gas field, said the committee should “make sure that we’re involved before the promulgation of the rule” and that NMED representatives should be brought before the committee’s next meeting so “we can foresee any problems that they may have among themselves.”

“It’s overwhelming,” Shoup says of the fieldwork with Eddy. All of the wells, all of the tanks, all of the leaking gasses.

“And living here, it’s a little bit scary,” she says. “You would need a small army to police all of this.”

She was born and raised in Carlsbad, left for college and then lived in New York and Los Angeles. She came back and stayed and agreed to run CCFF because a string of friends and family members came down with odd, inexplicable cancers, “which is scary and traumatic.”

“I think a lot of people here are just kind of unaware of the health impacts of this kind of pollution,” she says.

That week in June, record temperatures nearly 20 degrees above average baked the Permian Basin. A few weeks later, a massive rainstorm flooded neighborhoods in Carlsbad and killed a person.

“We’re living through crazy things every year that can be tied back to climate change,” she says.

On her way out of town in June, Eddy checks a few last sites in the Loco Hills, a strip of thousands of wells roughly two miles wide and several miles long north of Carlsbad.

Calling the area hilly is generous. Wells sprout in every single direction, never more than a few hundred feet apart and they flash past like fence posts when driving down the state highway that bisects the area. Three-inch black PVC pipes connect all of the wells and tanks and pumping stations, crisscrossing what remains of the scrublands not covered in dirt roads and well pads. Up close, they gurgle and hiss as they transport oil in the heat.

Eddy pauses to check a map on her iPad that shows all of the wells in the district as a blizzard of yellow dots. “It looks like some kind of a video game,” she says. “We are completely surrounded.”

She drives to a dot for a booster station run by DCP Operating Company. In 2020, NMED fined DCP $5,313,390 after it released 2.1 million pounds of pollutants in 367 separate incidents across the Permian Basin.

“I’ve come to the site more than a dozen times in three years. Probably more than that. I’ve never come when we didn’t find some emissions,” Eddy says.

She stops, hops out of the Jeep and aims her camera at the site. The screen lights up with swirling colors and the air stinks.

“And yet it’s still here, doing what i­t does,” she says.

What it does is vent greenhouse gasses into the atmosphere, driving climate change.

“I mean, we’re seeing it. We’re actually witnessing (climate change) happening, while we’re standing there in the 111 degree heat.”