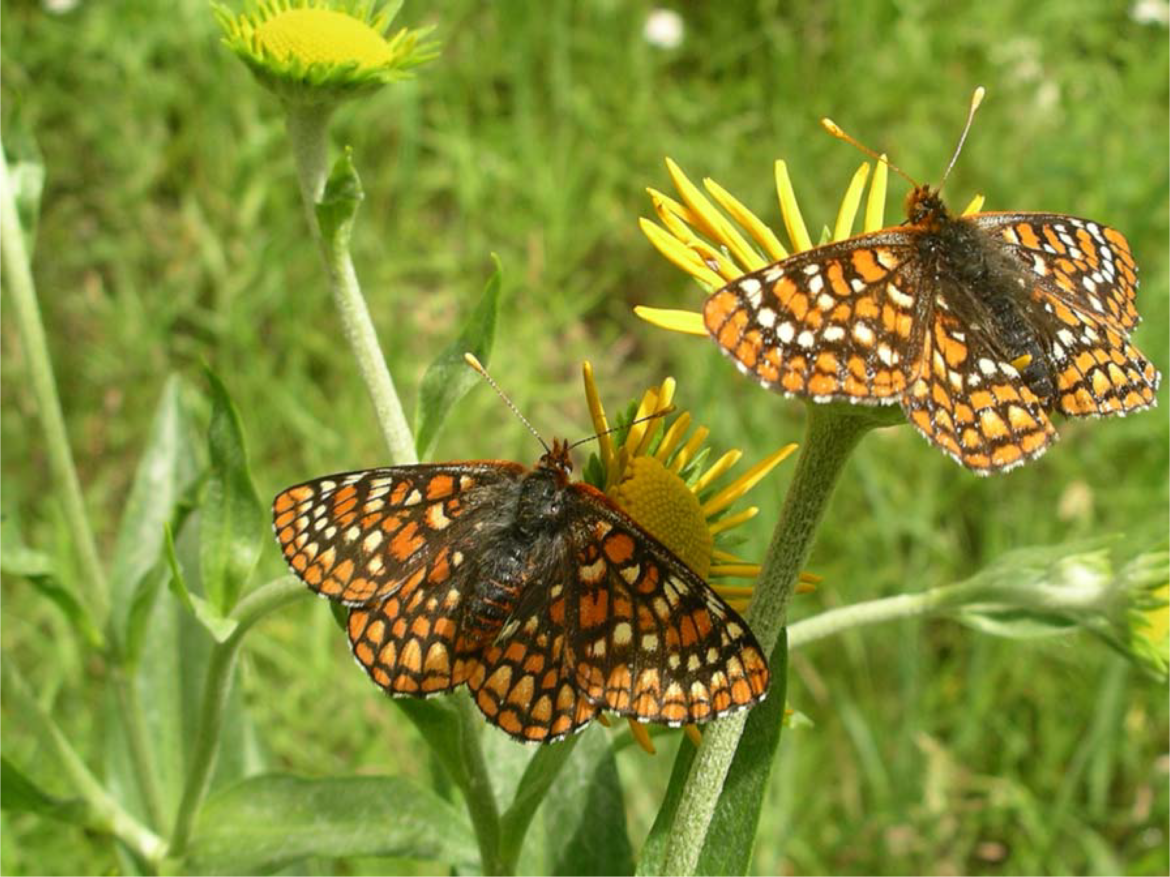 As climate change leads to warmer, drier conditions, some high altitude species found only in small areas of New Mexico may see their habitat vanish and have nowhere to go.

This is a concern for an orange, brown and white butterfly found only in a small area of the Sacramento Mountains around the Village of Cloudcroft.

This butterfly is known as the Sacramento Mountain checkerspot butterfly. Citing climate change as one of the threats, the Center for Biological Diversity filed a petition earlier this year asking for the butterfly to be listed as endangered. In a press release, the Center cited the U.S. Forest Service description of the butterfly as the “most endangered butterfly in the United States.”

This butterfly is an example of one of the many animals found only in small areas of New Mexico that could find themselves on the brink of extinction amid the changing climate.

New Mexico has hundreds of endemic plants and animals, or species that are only found in the state.

According to the U.S. Bureau of Land Management, New Mexico ranks fourth in the country for “native species richness.”

Some of them, like the Sacramento Mountains checkerspot butterfly, inhabit such a small area that changes to the ecosystem—including wildfire—could potentially wipe out the species.

“We are a state with many unique sort of niche habitats and ecosystems that are not necessarily found anywhere else,” said Bryan Bird, director of the southwest program for Defenders of Wildlife. “And so a lot of our wildlife have evolved just to be in these places and those are especially vulnerable because they’re small.”

He gave the example of the Jemez mountain salamander and the Sacramento mountain salamander, which evolved in limited ranges in New Mexico. Climate change places these amphibians at risk in part because of their small range, he said.

Another animal that is running out of places to move on the mountains is the pika—a small rabbit with short ears that can be seen darting among the rocks on mountain slopes. New Mexico has its own unique subspecies of the pika—the Goat Peak pika that is found in the Jemez Mountains.

A study published earlier this year in the journal Biological Conservation warned that 90 percent of endemic species could face negative consequences like reduced populations if the earth warms 3 degrees Celsius above pre-industrial levels. These endemic species are likely to be hit harder than species with broader ranges, leading to a decrease in biodiversity.

The study found that 84 percent of species endemic to high elevation “sky islands”—such as the Sacramento Mountains—are at risk of extinction due to climate change.

According to the UN Emissions Gap Report, the world is on pace to see warming of more than 3 degrees Celsius above pre-industrial levels.

“Overall, we are heading for a world that is 3.2°C warmer by the end of this century, even with full implementation of unconditional nationally determined contributions (NDCs) under the Paris Agreement,” Inger Andersen, the executive director of the United Nations Environment Programme, wrote in the gap report released in December.

The checkerspot butterflies are what biologists call “flashy,” meaning they can have a huge population increase in one year followed by low numbers the next year. However, biologist Elizabeth Bainbridge, who works for the U.S. Fish and Wildlife Service, said over the past 20 years the population has been declining.

One of the threats that could destroy the butterfly subspecies is wildfire.

Bainbridge said there has not been a major wildfire go through the area in more than 100 years and the proximity to the Village of Cloudcroft has led to forest thinning and other efforts to reduce the risk of major wildfires. But that does not mean fire isn’t a risk.

Because of its tiny habitat range, a conservation plan drafted in 2004 by the U.S. Fish and Wildlife Service warned that a wildfire could wipe out the entire species.

“Because the butterfly is a non-migratory, fairly sedentary, host-plant specialist, the whole population could be eliminated should the entire occupied butterfly habitat severely burn,” the conservation plan states.

However, the plan states that the butterfly favors meadows that are less likely to burn compared to the surrounding forest.

While climate change does not directly cause wildfires, it can lead to more catastrophic consequences when a fire is sparked. These fires can be caused by natural events like lightning or by people, including campfires that are left unattended.

The checkerspot butterfly prefers cool mountain meadows where the caterpillars can feed on the New Mexico penstemon and the adults can find nectar from plants like orange sneezeweed.

The butterfly is also vulnerable to drought, she said.

“It relies on the pulses of monsoon rigor to reinvigorate the habitat and to provide enough vegetation that this butterfly can finish its life cycle,” Bainbridge said.

Additionally, Bainbridge said increases in outdoor recreation, especially in 2020, had biologists concerned for the butterfly’s habitat. Bainbridge said there were concerns that people could trample the New Mexico penstemon that the caterpillars rely on.

Bainbridge said people who are recreating should be aware of the plants around them and should stick to designated trails and campsites to avoid damaging the butterfly’s habitat.

The combination of climate change and habitat loss is a “one-two punch” for New Mexico wildlife, Bird said.

While the state is taking steps to address the causes of climate change such as methane emissions, Bird said individuals can help with efforts to combat habitat loss. This can include volunteering with revegetation efforts.

While the state is taking steps to address the causes of climate change such as methane emissions, Bird said individuals can help with efforts to combat habitat loss. This can include volunteering with revegetation efforts.

The U.S. Fish and Wildlife Service, as well as the U.S. Forest Service, are working to improve habitat for the Sacramento Mountain checkerspot butterfly, including planting nectar sources like orange sneezeweed.

This year, Bainbridge said, they got lucky. After planting the new vegetation, the Sacramento Mountains received seven inches of precipitation.

Changes in land management and community planning are ways that communities can address habitat loss and help New Mexico’s unique species, he said.

“There’s a lot that can be done in the short time to basically ensure that wildlife has what it needs to adapt to climate change,” Bird said.

In terms of endemic species, Bird said their habitat needs to be identified and steps need to be taken to protect the habitat and ensure that if one population is wiped out there is another population in the state that can be used to repopulate the area.

Protecting the habitat for these species could mean excluding areas from grazing or bringing in beavers to help riparian systems remain wet longer.

“We underestimate the power of beaver to really help us adapt to climate change,” Bird said.

He said that endemic fish often retreat into upstream tributaries during wildfire and that it is important that these fish have access to those waterways.

But addressing the climate change impacts to wildlife endemic to sky islands like the Sacramento Mountains can be much more difficult.

“It’s an extraordinary challenge to consider these high elevation endemic species that really have nowhere to go,” Bird said.