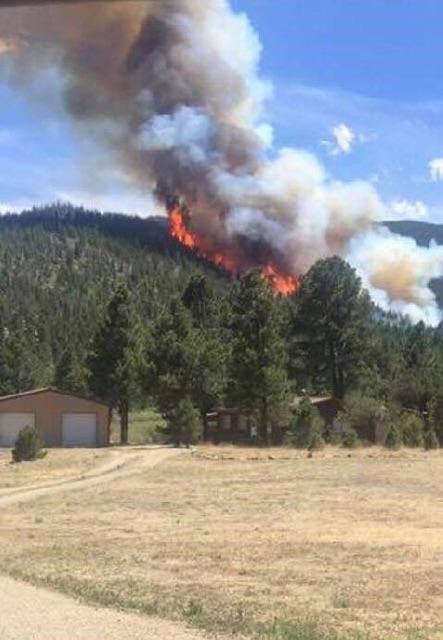 Cimarron District Forester Arnie Friedt remembers the Ute Park Fire of 2018 and how crews worked to prevent any residences from being destroyed.

Then the rain came and flooding from the burn scar damaged more than 26 homes.

“So actually the flooding was more damaging than the fire to property,” he said, adding that he hadn’t previously realized that.

Years later, the burn scar continues to impact the community.

About a week ago, rain over the burn scar once again brought flooding to Ute Park, Friedt said.

Officials from the State Forestry Division say the burn scars can lead to more catastrophic events than the fires themselves—turning rivers black with ash and damaging water treatment infrastructure as well as houses.

And, with climate change leading to more high-intensity blazes, understanding burn scars is important in responding to wildfire.

“I’m often standing in a public meeting during the wildfire and telling people ‘you ain’t seen nothing yet’ and that’s a real sad story because at the time they’re experiencing the wildfire they think that ‘if we can just get through this fire we’ll be okay.’” said Mary Stuever, the Chama District forester.

The phrase “hundred year flood” is no longer used by hydrologists on these types of scars because the equivalent of the type of flood that can happen sometimes several times a year and often for years and years after, she said.

Stuever was involved in compiling a website and a print guide called After Wildfire New Mexico to help individuals and communities know what to expect.

She said the landscape includes various levels of vegetation. Grasses tend to hold topsoil in place and when grass returns after a fire it reduces the erosion, but trees and woody material have deeper roots and, as they get larger, they can use the water and reduce the flooding, she said.

“Until we can get that forest canopy back at some level, we’re going to continue to see flooding on these scars,” she said.

Related: After the fires: What do we want?

“I don’t believe we have a burn scar in the southwest that has fully recovered its hydrology back. So we don’t really know in the southwest how long it takes for us to really see an amount of flooding that is similar to what it was prior to these burns,” Stuever said.

The severity of the fire dictates what is left or not left on the ground, Friedt said. He said some fires only burn the low-growth while others are crown fires and burn the canopy.

Burn scar dangers are also impacted by the slope of the area. On some of the hills where the Ute Park fire burned in 2018, gambel oak has returned.

“It’s a carpet of green if you look out there,” he said. “And that’s helping out with the flooding concerns.”

However, on the steeper slopes where there was less vegetation even before the fire, the plants aren’t returning as fast as in other areas.

“So when the rain hits that, water’s just going to come down and continue flooding,” he said.

New Mexico has a lot of rural water utilities and some are more resilient to burn scar flooding than others, Stuever said.

The ones that rely on well water are more resilient in terms of water quality after a fire. Meanwhile, surface water systems face degraded water quality as the runoff from the burn scar carries ash.

“The creeks are just literally running charcoal black,” she said.

If the water utility is drawing from that creek when a flood hits, Stuever said it will impact the filters.

In northern New Mexico, Stuever said a managed fire led to a community hauling water for at least a year because of the impact to the water system.

In terms of well water, flooding from burn scars can sometimes lead to sediment getting into the gravel around the well and causing problems.

Some communities, like Raton, have been proactive in planning for water resources, Friedt said. Raton can get water from the Cimmaron area as well as Sugarite Canyon. The two reservoirs are fed by different riparian systems. This is one way that communities can mitigate the potential damage from wildfire burn scars before the blaze even sparks.

“They’ve been very proactive in defending their water supplies and they’ve done a great job,” he said.

This leads to a larger burn scar and more debris flows.

“The mega-fire is a new phenomenon on the landscape and is a direct result of having excluded fires out of our ecosystem for the last 120 years or so,” she said.

On top of that, climate change is leading to hotter and drier conditions that make it easier for these large fires to start, Freidt said.

Stuever said the state began to see increasing mega-fires in the late 1990s and early 2000s.

The State Forestry Division is limited in what it can do after the fire burns to mitigate for burn scar flooding, but there are actions that can be taken prior to a fire.

Freidt highlighted efforts like thinning and forest restoration, which have been shown to reduce fire intensity.

After a fire, the State Forestry Division is limited to providing technical assistance and resources like the after fire guide.

Concrete barriers can be placed out to try to prevent an area from being flooded, Stuever said.

“Mother Nature is responding after these fires with such incredible force that our real chance of moderating what happens after a fire is the activity before a fire,” she said.

State Forestry Division Deputy Director of Forests Lindsey Quam said private land owners who are land rich and money poor have limited options in what they can do and big scale efforts are needed to mitigate post-fire erosion.

He said the State Forestry Division is working on another guide booklet that will highlight structures that landowners can create using the materials they have on hand like rocks, trees, boulders and tree trunks. This guide should give landowners an idea of what type of structures work well in different types of drainages to limit flooding.

With monsoon rains bringing flash flooding even in areas without burn scars, Stuever had a message for people.

“It is so important that people understand how to respond to the threat of a flash flood,” she said.

“The other thing with flash floods is that often water accumulates much farther downstream than the storm happens,” she said.

She said people need to be aware of what is going on in the watershed upstream from them.