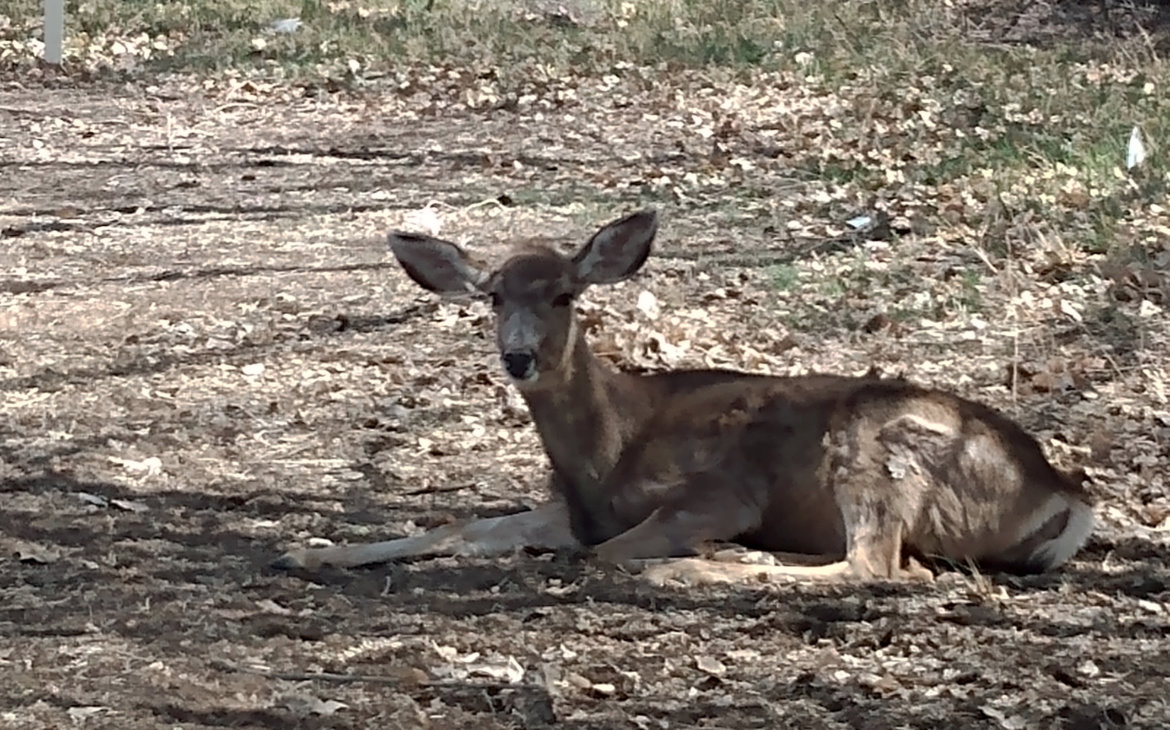 A deer rests in the shade in Animas Park in Farmington.

As Congress considers a bill that would fund wildlife conservation efforts nationwide, panelists told the state Legislature’s interim Water and Natural Resources Committee in Taos that more funding is needed to support those efforts, but disagreed on efforts to reform the way wildlife is managed in New Mexico.

The Recovering America’s Wildlife Act was introduced earlier this year by U.S. Senator Martin Heinrich, a Democrat from New Mexico, and, if it becomes law, New Mexico could receive $27 million to implement projects that will help species on the State Wildlife Action Plan.

However, this would require an approximately $9 million match of funds from the state.

The New Mexico Department of Game and Fish relies on the sale of fishing and hunting licenses and stamps, as well as federal excise tax, for the majority of its funding and does not receive any money from the state’s general fund, Tristanna Bickford, a spokesperson for the department, told NM Political Report in an email prior to the committee hearing. She said there is additional funding through the federal Sikes Act, which provides for managing fish and wildlife on military lands. The department also receives donations to the Operation Game Thief and Share with Wildlife programs, as well as grants from partner organizations.

“For the past several years, New Mexico has stood out from other states seeing an increase in the sale of hunting and fishing licenses, including most recently when during the 2021 Big Game Draw license sales were up nearly 20 percent,” she said.

However, Bickford said the department is continuing to look for new funding opportunities or to expand on existing ones.

The department has an annual budget of about $40 million.

“The needs of wildlife are exceeding what funding is provided by sportsmen,” said Colleen Payne, the regional director of the Mule Deer Foundation.

Kyle Jackson, a hunt manager for Vermejo Park Ranch, said funding could come in the form of taxes on the sale of outdoor recreation gear like backpacks, which would mean the users who benefit from watching wildlife would be paying into conservation efforts much in the same way that hunters and anglers currently do.

Other panelists, like Southwest Environmental Center Executive Director Kevin Bixby, supported funding from the state’s general fund. Bixby cited the tourism impact of people coming to the state to watch wildlife. He said this generates more than $337 million in economic activity in the state. And, because wildlife benefits everyone, he said it is fair that everyone pays into the system that protects it.

“It’s not fair that a minority of New Mexicans who buy licenses should be expected to contribute most of the department’s revenue,” he said.

Payne also said that if the department could receive some funding from the state’s general fund, there is a “laundry list” of projects that need money. For example, she said the state could fund increased testing of deer for chronic wasting disease and more funding could help hire more staff.

Currently, only about 60 percent of vertebrate species found in New Mexico are managed by the state Department of Game and Fish, according to Bixby. None of the invertebrates, except those deemed threatened or endangered, have any form or protection, although some of these invertebrates occur only in a small area and could be wiped out by the destruction of habitat. These invertebrates include pollinators like butterflies and bees as well as animals like snails that live in remote springs. Actions to protect these animals will not be eligible for RAWA funding because they are not included in the wildlife action plan.

Meanwhile, some non-native species like the ibex and tilapia that were introduced to the state for hunting and fishing purposes have protection under state law.

And environmental advocates said the laws regarding wildlife management are outdated—many were drafted a hundred years ago. In the past century, the understanding of ecosystems has changed.

State Sen. Jeff Steinborn, a Democrat from Las Cruces, said the state laws still protect rattlesnake roundups and require wildlife to be managed based on economic value. He said these laws are not based in science and are outdated.

Bixby said New Mexico is one of the most biodiverse states in the country.

“Our current system is just not equipped to protect this natural wealth,” he said.

Bixby said the world today is a very different place than it was in 1921 when the framework for wildlife management in the state was written. Since then, both technology and science have seen “unimaginable advances,” he said.

“We now have a much better understanding of how nature works. We now know that every species contributes in some way to the functioning of natural ecosystems and those systems in turn provide us and all organisms the things that make life possible,” Bixby said.

He said those natural ecosystems are threatened and the wildlife management laws in New Mexico still reflect the views that species people hunt and catch are more important than the ecosystems.

Chris Smith, a southwest wildlife advocate for WildEarth Guardians, said wildlife has many benefits for the people of New Mexico, including improved mental health. However, he said the world is facing the sixth mass extinction and biodiversity is declining. Smith said wildlife is a public trust, meaning it should be managed for the benefit of all people.

“In order to protect and conserve one of our state’s most amazing and valuable assets, in order to confront the crisis that wildlife is facing, in order to best serve New Mexico and in order to live up to the public trust doctrine, I urge this committee and the legislature at large to change the mission of the Department of Game and Fish to include the conservation of all species and to provide the game commission with the authority to manage and protect all wildlife in New Mexico,” Smith said.

State Senator Pat Woods, a Republican from Broadview, disagreed with this. He spoke about the purpose of State Trust Land to earn money for schools. Woods expressed concerns that protecting all species could negatively impact efforts to use the State Trust Land to fund education.

“If it’s managed 100 percent to keep a mosquito alive or a grasshopper alive and it takes money away from the school kids, I’m not happy with that,” he said.

Loren Patterson, the president-elect of the New Mexico Cattle Growers’ Association, said efforts to protect the lesser prairie chicken have hurt the agriculture and energy industries in New Mexico and could make it harder for the state to transition to renewable energy by limiting places where wind farms can be built.

But changing the name of the New Mexico Department of Game and Fish would cost an estimated $3 million, which Jackson and Payne said could be put to better use.

“If you truly, genuinely want to help wildlife in New Mexico, do not waste the time, resources and money to rebrand a department already doing the things that you have tasked them to do,” Payne said.