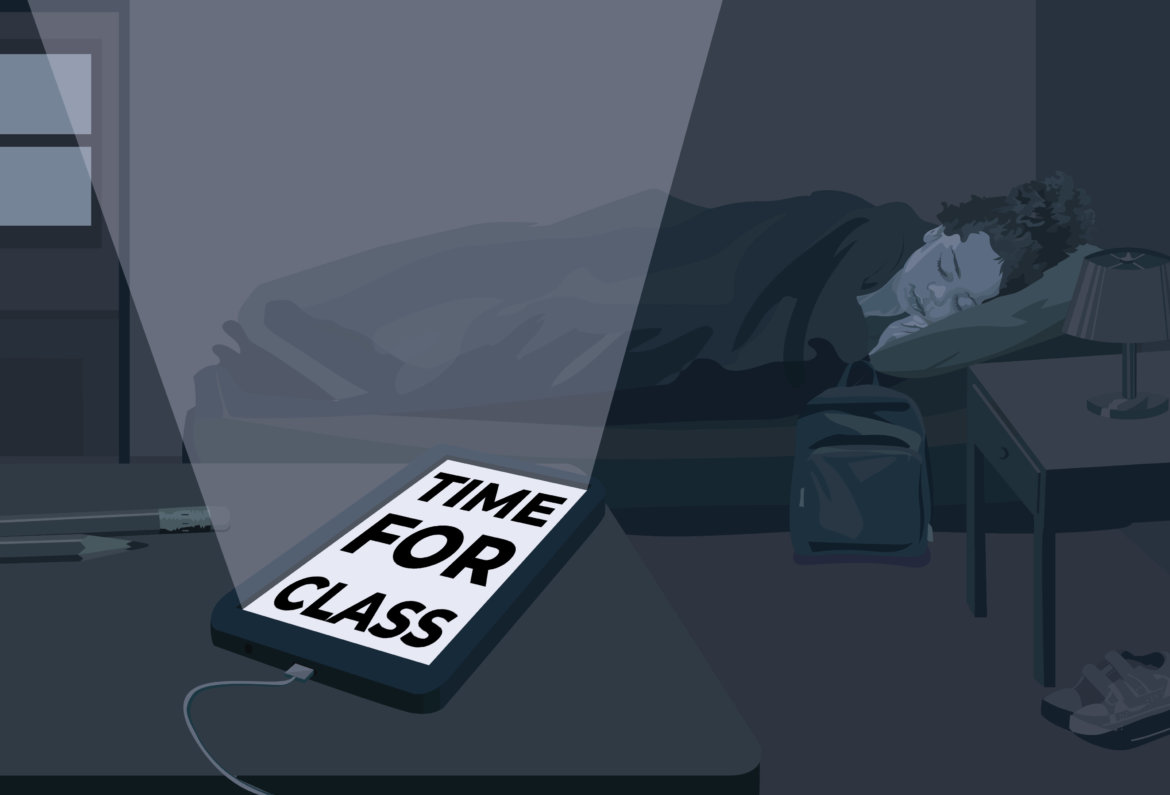 In Spring 2020, uncertainty quickly turned to desperation for New Mexico’s Public Education Department. In the first months of the pandemic, tens of thousands of students — as many as one in five across the state — were failing a class, skipping school or nowhere to be found.

In response, the state agency made a rushed and questionable decision: It hired a Utah company called Graduation Alliance to pilot an untested “re-engagement” and academic coaching program that relied on phone calls, emails and texts to help at-risk students.

For its outreach efforts — which critics likened to spam or robocalls — the Salt Lake City-based firm will earn $4.6 million.

This story is by Searchlight New Mexico and is republished here with permission.

What remains unclear is whether the program was worthwhile. Graduation Alliance, purchased last year by private-equity giant KKR & Co. — one of the world’s top global investment firms — did not provide detailed information about what its coaching entailed or offer meaningful proof of the re-engagement program’s effectiveness. A review of company reports and 748 pages of public records revealed no verifiable evidence that it helped students improve their attendance, get better grades or otherwise make academic progress.

To its most vocal critics, Graduation Alliance epitomized a trend at PED of outsourcing sensitive services to out-of-state companies. As one legislative analyst put it, the agency lacked the in-house staff to implement needed programs, resulting in a troubling pattern of seeking outside expertise.

Hiring Graduation Alliance wasn’t even logical, other observers said. How, they puzzled, could a Utah call center bring some of the most at-risk students back into the education fold? And why was a private firm being paid to replicate services that local school employees were already providing? School staffers had been texting students, contacting family members — even showing up on doorsteps to drop off supplies and food — ever since COVID-19 arrived.

“Why wasn’t I paid more to do the same thing?” said one northern New Mexico teacher who, like others, asked for anonymity because she feared job repercussions.

From April 2020 through June 2021, public schools entrusted Graduation Alliance with the names of 45,944 at-risk schoolchildren, including vulnerable students who needed help with online learning, were at risk of dropping out or failing — or had fallen off attendance rolls completely. About 17,494 of those students, or 38 percent, eventually signed up for the free and voluntary academic coaching, according to the company and PED.

The program was a big success, according to data in Graduation Alliance’s July 1 final report. A participants’ survey, for example, showed that a whopping 91 percent of all parents, 100 percent of Spanish-speaking parents, 96 percent of school districts and 92 percent of 6th-to-12th graders thought the program “maintained or increased” students’ engagement during the 2020-21 school year, the report said.

The report did not, however, disclose that less than 3 percent of participating students and parents took the survey — a sample so small that it’s impossible to conclude success.

“I fear this is the norm among education vendors,” Todd Rogers, a professor of public policy at Harvard Kennedy School of Government, wrote in an email. Rogers, a school absenteeism expert, said education companies often misrepresent the success of their programs based on anecdotal evidence instead of rigorous testing. “It’s particularly offensive and immoral since the stakes for kids are so high.”

Searchlight New Mexico contacted 20 school districts and canvassed educators from 15 public and charter schools to assess the value of Graduation Alliance’s program, officially dubbed ENGAGE New Mexico. A few educators voiced approval: They said it added an important layer of support for struggling students and families during the chaos and isolation of the pandemic. The majority — especially harried teachers — had never heard of it.

“It seemed like in the first quarter of the school year we were hemorrhaging attendance,” said Tony Sosa, the district’s attendance success coach.

The task in Cobre and elsewhere was Sisyphean: find at-risk children who were by default some of the most difficult to track — and who often had no broadband or cell-phone service at home — and somehow draw them into online classrooms. Some students were “completely disengaged or chronically absent in the virtual learning environment,” a Graduation Alliance report noted; others were in foster care, lacked stable housing or faced other crises.

About a third of Cobre’s referred students ultimately signed up for the coaching program, and Sosa received weekly spreadsheets showing the number of contacts they’d received. But ultimately, he was uncertain whether the program impacted academic performance or attendance.

“I would check my individual spreadsheets to see if the student was progressing on our end, and it didn’t always translate. Graduation Alliance would say, ‘Yeah we’re really working well with this family,’ but we didn’t always see the benefit of it on our end.”

The service was nevertheless attractive, not only because it was free but also because school officials were trying everything in their power to help struggling families and — critically — find errant students.

By November 2020, PED had discovered that approximately 12,000 students had vanished from attendance counts. Some children had dropped out, left the state, transferred or, in a very few cases, died.

PED launched a major multi-agency effort to locate the students and turned to Graduation Alliance for added help. The company had been in the “drop-out recovery” business for years; it had some 200 employees at its disposal.

The company did what school districts couldn’t do with their own thinly stretched personnel: reach students in high volume, said Katarina Sandoval, PED’s deputy cabinet secretary of academic engagement and student success. The coaching helped create structure and routine — aspects of a kid’s day-to-day school life that were “gone in the blink of an eye” when life went remote.

With almost equal speed, Graduation Alliance essentially became an arm of PED. As such, it was given access to private information about tens of thousands of students, but without the level of transparency that state agencies must provide.

Emails also reveal the company’s authority with officials. It won its first no-bid contract with the state (awarded on an emergency basis) in late April, just nine working days after submitting a proposal for the re-engagement program, emails show.

In June, Graduation Alliance released a white paper co-authored by two top officials, lauding the nascent services they said they’d co-created. PED’s Sandoval and Gwen Perea Warniment, deputy secretary of teaching, learning and assessment, joined with Richards of Graduation Alliance to launch what the white paper called a first-in-the-nation collaboration — one that would foster resiliency in students and help them build learning strategies during the global health emergency.

In the coming months, Graduation Alliance was able to use this white paper to sell its program to Arkansas, Michigan, South Carolina, Arizona and Ohio, securing at least $9 million in contracts in the process.

Even if only 40 percent of students signed up for it, the program was a success in New Mexico, Sandoval said.

“We absolutely think that if it’s 40 percent or if it had been half or a quarter [percent],” it would be a success, she said. “Every support that we could possibly provide to our students so that they did not become part of the 12,000 unaccounted for [students], is a success.”

It’s possible that Graduation Alliance helped hundreds or even thousands of students. But there’s no way to tell, because the company didn’t measure outcomes. Its reports provide numbers, but the numbers say nothing of the quality or benefits of the coaching.

Graduation Alliance employees — only four of them in New Mexico — made more than 563,611 “interventions,” as the contacts were called. The coaches, who might or might not have credentials in teaching or counseling, made an average of 35 interventions per student.

But the company has its controversies, too. Erin Luper, its vice president of government relations and public affairs, is a former lobbyist for the NRA. Luper is credited with defeating gun safety legislation in Tennessee during a string of tragic child shooting deaths and shootings at U.S. schools. When asked why New Mexico would work with a company that employed a former NRA lobbyist, outgoing PED Cabinet Secretary Ryan Stewart said he’d never heard of Luper. Nevertheless, emails obtained through a public records request show that she was included in company correspondence with PED officials.

Harvard professor Todd Rogers is also a co-founder and chief scientist at EveryDay Labs, a California-based company that partners with school districts to reduce student absenteeism.

To see what improved attendance during the switch to remote learning, EveryDay conducted more than a dozen large randomized tests, in keeping with the federal Every Student Succeeds Act of 2015. The broad aim is to produce evidence-based programs backed by rigorous testing so that “everyone gets better at serving kids,” he said in an email.

Graduation Alliance did not conduct randomized trials to test its services. There was no time, the company said — PED wanted to act fast.

Nearly every education agency nationwide has been looking for a silver bullet during the pandemic. The need for urgent solutions increases after a disaster; the opportunity for profits can increase, too. In the wake of the coronavirus, which forced more than 1 billion students worldwide to pursue classes online, the U.S. ed-tech sector attracted a staggering $2.2 billion in private investments — the biggest amount ever.

Back at Cobre, Tony Sosa walked away wondering who saw the greatest benefit from ENGAGE New Mexico — students or the Utah-based company. “Were they working in the interest of Cobre Schools,” he wondered, “or Graduation Alliance?”