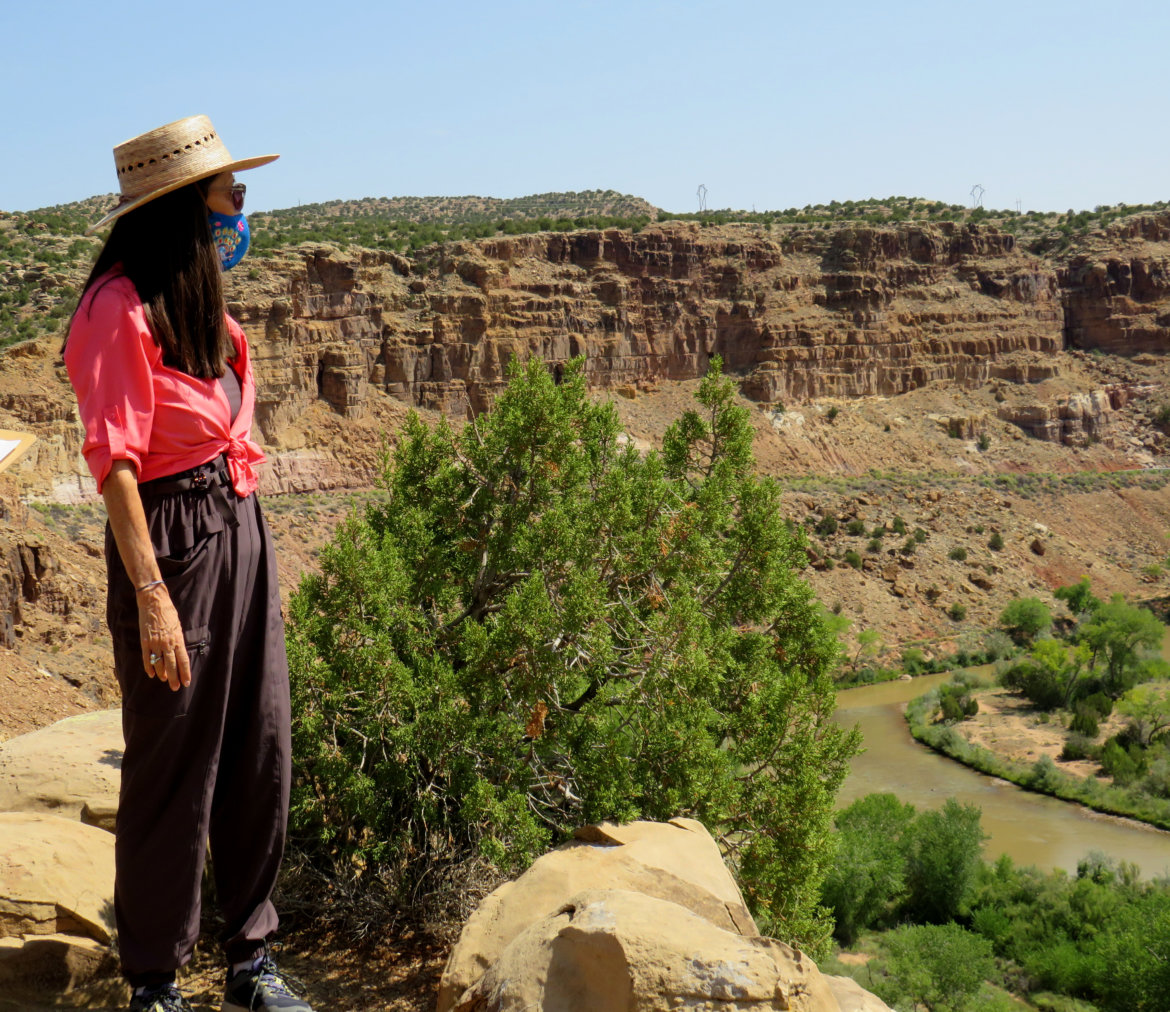 For centuries, acequias have provided water to farmers along the Rio Chama near Abiquiu, but now some stretches are drying up and the community is facing curtailment.

With climate change leading to less water in the area—especially in terms of spring runoff—the acequia members are looking to make every drop count.

“They’re not making any more water,” said Tim Seaman with the Rio Chama Acequia Association, while speaking with U.S. Rep. Teresa Leger Fernández, a New Mexico Democrat, as they stood looking out over the Rio Chama below Abiquiu Dam.

Leger Fernández visited acequias along the Rio Chama as part of her Agua Es Vida tour on Tuesday. The tour was an opportunity for the congresswoman to see first hand how climate change is impacting water users in New Mexico.

She said being there will help her understand what the issues are that the acequias are facing so that she can help them get resources from Congress.

“I need to have your voices inform my voice there,” she told members of the Rio Chama Acequia Association.

Many of the farmers that rely on acequias practice subsistence farming, meaning the crops they produce are used to support their families. But that tradition that dates back generations is being challenged by a changing climate.

Members of the Rio Chama Acequia Association said they want to obtain the ability to store some of their water rights in Abiquiu Lake rather than Heron Lake and they need help to fund infrastructure improvements, including making the diversions more resilient to high and low water flows.

Abiquiu Lake is directly upstream of the acequias, meaning less water would be lost before it reached the users.

“The bottom line is we want to be self-sufficient,” said Darel Madrid, president of the Rio Chama Acequia Association, to the congresswoman.

The members of the acequia association have felt left out of the conversations about water in New Mexico, Madrid said. He said it can be frustrating for farmers to watch water flow by their houses but not be able to use any of it because it is allocated to areas like Albuquerque as part of the San Juan-Chama Project.

There is a stream gauge near the unincorporated community of Los Ojos in Rio Arriba County that is used to determine how much water the acequias can divert from the Rio Chama.

On Tuesday morning, the flow was just 25 cubic feet per second.

The Rio Chama Acequia Association has the ability to buy water from members of the San Juan-Chama Project and, through an agreement with Los Alamos County, it has been able to purchase 1,200 acre-feet, Madrid said.

At the same time, the acequias in the area date back to the 1500s and the farmers have been relying on them for irrigation water since the time the Spanish colonized the area.

State Senator Leo Jaramillo, D-Española, told Leger Fernández about a section of an acequia just ten miles downstream of a bridge at El Rito. While there is water in the acequia at El Rito, it becomes dry downstream.

This didn’t used to be the case, according to Rio Chama Association Secretary Sam Garcia. But climate change has led to less water being available and, Garcia said, the dry area could move farther upstream as the climate continues to change.

“As the weather has changed, it’s become drier and drier,” Garcia said.

He said there’s not enough snowfall and it is creating a shortage of water.

“Everybody wants water,” he said.

Garcia said there is demand for water for municipal use, recreation and protection of species like the Rio Grande silvery minnow.

“Everybody’s fighting for the water and there’s not enough for everyone,” he said.

In other parts of the system, the Rio Chama does not have enough water to even make it past the diversions and into the ditches, Madrid said. This has left farmers relying on rain water.

“Ironically, we’re in the midst of a chronic drought, but this year we’ve been blessed with a very good monsoon season,” he said, adding that Mother Nature has been kind, but it does not solve the problems.

The tour began with a song about cleaning acequias. Jaramillo and Leger Fernández danced to the tune and, at the end, the group gathered to sing the final line “para mantener lo que yo quiero tanto”–to maintain that which I love so much.

“To me acequias are the most perfect symbol of what we should be, about a community, because of the fact that we all work together to do the limpia, to clean the acequia,” Leger Fernández said. “And then it benefits everyone individually.”

She said she also loves that it is done with a sense of joy, like expressed in the song.

“Now what we’re witnessing is we can’t do it all the time anymore because we don’t have the water,” Leger Fernández said, adding that the acequias are facing problems that they did not cause.

Instead, the acequia officials, especially the mayordomos, are challenged with making the little water they have work for everyone in the community.