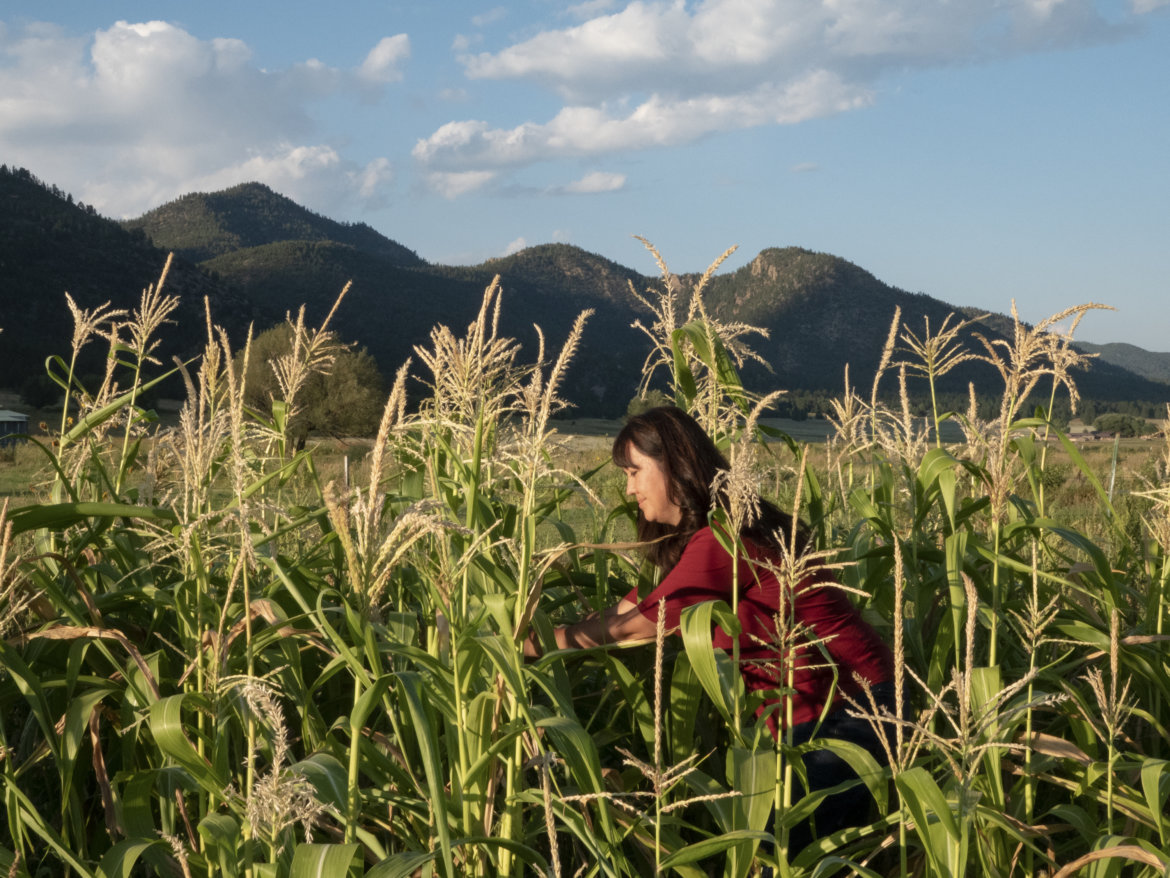 Paula Garcia, ED of the NM Acequia Association, in her home field of maiz azul grown from the heirloom seed of her Grandfather Pablo Garcia.

When New Mexico’s recreational cannabis bill was signed into law in April, Mike Hinkle and Ryan Timmermans jumped at the chance to get into the industry. The two business partners, both recent transplants from the South, bought portable buildings, seeds, grow lights and a property in the village of Carson, with a domestic well they thought they could use to irrigate their plants. In total, they invested more than $50,000.

“That’s actually the most money I’ve ever had in my life,” Hinkle said. “I was extremely excited because we thought we had a shot.”

Three months later, Hinkle fought back tears as he spoke at a hearing about regulations for the new cannabis industry, held at the State Capitol. He’d discovered that a domestic water supply would not fulfill the requirements for a license and that no amount of money would get him the required water rights in Carson, near Taos — because they simply weren’t available. He was still emotional when the three-minute timer ran out and his mic was cut off.

Hinkle was not alone in his dismay. Nearly 200 people submitted written comments to the state’s newly formed Cannabis Control Division, while dozens of others voiced frustrations at the Aug. 6 hearing. Among them were aspiring cannabis business owners and members of acequia collectives — traditional ditch-irrigation communities worried that the new rules would undermine their senior water rights. Most shared a central concern: water.

Would there be enough for farmers who depend on acequias to grow food? How would rural cannabis growers secure water rights? How could the average New Mexican afford those rights? The two presiding officials at the meeting — a retired judge and a deputy director of the Cannabis Control Division — heard participants raise those questions again and again.

“Give the citizens a chance,” implored Jeffery Bannowsky, of Farmington. Like many, he feared that big corporations and out-of-staters would corner the cannabis market.

In the days after the hearing, Hinkle put it more bluntly: “I’m afraid the government is going to screw us,” he said.

The Cannabis Regulation Act requires that people hoping to get a license — whether they plan to grow 200 plants or 10,000 — must first prove that they have valid and sufficient water rights. In New Mexico, these don’t come cheap: Some cost tens of thousands of dollars per acre-foot. That means the water rights requirement might squeeze out almost everyone except big companies, potentially destroying any possibility of an equitable marketplace that benefits local communities.

But the problem goes deeper than cost. In many areas of New Mexico, there simply isn’t enough water to go around.

The state is in a 20-year mega-drought — potentially the worst in 1,200 years, scientists report. New Mexico’s legalization occurred just as chile farmers in the Lower Rio Grande Valley were offered an incentive to leave their fields fallow in order to restore dangerously low groundwater levels. In areas like Carson, where Timmermans and Hinkle planned to set up shop, water is so scarce that many people need to have it trucked in. Climate models predict that New Mexico will only get drier in the future.

Proponents were so anxious to expedite the bill that they didn’t fully consider the state’s strained water resources, critics said. There was no accounting of how much water the industry might use, said John Romero, the water rights division director at the Office of the State Engineer. No limit was placed on the number of licenses — local or out-of-state — that could be issued.

On Aug. 25, the Regulation and Licensing Department began accepting online applications from would-be cannabis producers: Within 10 days, 1,222 applications had poured in. “We’re driving the car as we’re building it,” said John Blair, deputy superintendent of the RLD.

The Office of the State Engineer, which handles water rights issues, was consulted only minimally when the bill was introduced in the regular legislative session. When it was pushed through in the special session, the OSE was not consulted at all, Romero said.

If it weren’t for the efforts of the New Mexico Acequia Association, the bill likely wouldn’t have offered any substantive water protections, according to the NMAA’s executive director, Paula Garcia. Acequias are the lifeblood of traditional agriculture in New Mexico, nourishing local farms and providing a cultural anchor. The NMAA works to help acequia members, or parciantes, protect the waterways. “It’s not about making money,” Garcia said. “It’s about trying to balance livelihood with way of life.”

Once the bill was on their radar, Garcia said, its flaws became apparent. “It was an uphill battle” to put protections in place, but securing them was critical, she said. Cannabis growing can have impacts “in every quiet corner of every village.”

Garcia and other NMAA members helped convince lawmakers to add a requirement that applicants have either water rights, a legal right to a commercial water supply, or another sufficient source. This was only a tentative win, offering limited protections. “The sponsors were so intent on passing something, they didn’t want us to meddle with their bill too much,” she said.

For aspiring growers like Hinkle and Timmermans, though, the water rights requirements meant the end of the road. Like many hopefuls, they hadn’t understood how water scarcity would impact their ability to get a license.

“This whole water rights thing caught me sideways,” said Hinkle, who moved to New Mexico from South Carolina in 2015. Until cannabis regulations became final on Aug. 24, the requirements and process of applying for a license were obscure. Prospective producers were left to pore over the 177-page Cannabis Regulation Act and consult draft regulations, which were still in flux. Many did not understand what was required.

The partners had hoped to run a cannabis micro-business for up to 200 plants on a property next to a nonprofit that Timmermans launched in 2017, Veterans Off-Grid, which offers housing and support to veterans experiencing homelessness. They assumed they could use the domestic well on the property, supplemented with rainwater catchment.

It wasn’t until Hinkle read an article in the Santa Fe New Mexican that he realized the domestic well would not be sufficient. He made desperate calls to state offices, only to discover that pursuing water rights would be futile.

Now, he and Timmermans say they’ll lose their investment. Hinkle feels that New Mexico’s lawmakers set him up for failure. “This is going to break the backs of people like myself,” he said.

The state “made it sound like this was for regular people, but at the same time they already knew the water rights situation,” he said. “I know there are a lot of small businesses out here like me and my buddy. A lot of New Mexicans are going to get hurt.”

John Romero has seen droves of applicants baffled by water rights. “We’re getting calls all the time,” he said. “In every region, there’s somebody interested in cannabis.” Romero created an online FAQ for common issues — misunderstandings about domestic wells, acequias and more. But the calls just kept coming.

The agency has 31 vacant positions that he said he can’t fill due to budget constraints.

“It’s creating a lot of work for us. People want us to check if they have water rights on their land, if they’re permitted for commercial use, and stuff that usually consultants or attorneys do for a fee,” he said. “They’re asking us to do it and we’re like, ‘We’ll try to help, but it’s not our job.’”

Water rights requirements pose enormous problems for small growers with limited capital, especially in rural areas. Acquiring water rights is costly and time-consuming. Many basins are closed to new appropriations. “There’s no more water to go around,” Romero explained. That means businesses have to transfer rights by leasing or buying them from an existing owner.

Already, there’s a long queue of such transfer applications at the OSE. “We’ve got a backlog of over 500 applications already pending statewide,” Romero said. Completing a transfer can take up to a year, or even longer if the transfer is held up by neighbors’ protests — a crucial tool, as acequia communities see it.

Transfers degrade the democratic structure of acequias, Garcia said. “When people move their water rights to a well, they’re going to pump, rain or shine,” she explained. With acequias, there’s a shared ebb and flow. “When there’s less water, we all get less water. When there’s more, we all get more.”

Poki Piottin knows all about the problems with water transfers. And he knows about fending off out-of-towners, too.

Piottin is the commissioner for the Vado de Juan Paiz Ditch Association in Guadalupe County, south of Las Vegas, home to market-garden farms, hay production and other agriculture. He fears that cannabis production will be devastating to locals, a threat brought home when he received a call from a California man in early spring. “He was very arrogant, very aggressive,” Piottin said.

The Californian wanted to buy property and water rights at the end of Piottin’s ditch — and wanted assurances that the acequia would offer a reliable water supply for cannabis. Piottin explained that assurances were impossible: The flow of the acequia depended entirely on weather conditions, and parciantes must make compromises when water is scarce. He tried to explain, too, that an acequia is not like a well or a pump: It belongs to an idiosyncratic community. “But he really wouldn’t hear anything about the cultural traditions here. For him, there’s water and he should get some if he has rights.”

Piottin worries about incoming corporations, as well. If legal conflicts erupt, they have the advantage over private citizens in money, time and political influence. “This is a tragedy in many ways,” he said. “Most people like myself are too busy holding onto their land to get involved in politics at that level.”

Garcia offers an added perspective. The owner of a 200-acre cattle ranch in Mora, she’s typically been able to irrigate five acres from the acequia in past years. In 2020, she could irrigate only a tenth of an acre, just enough for a small garden. She had to sell 90 percent of her herd.

Of chief concern, she said, is a variance rule in the state’s cannabis law that allows for case-by-case exceptions to the regulations — a loophole that could allow big cannabis companies to use huge amounts of water. More than 30 parciantes submitted written comments urging lawmakers to remove the variance rule.

There are two possible futures for New Mexico, Garcia explained in a presentation to a legislative committee in August. The state can provide environmental stewardship and meaningful social equity protections to support small businesses and enrich rural communities. Or it can proceed without protections and face an onslaught of producers. In this darker vision — the one she fears will become reality — acequia communities will be overrun by corporate cannabis, stripped of their livelihoods and forced off land that has been in their families for generations.

“One thing that does give me some hope,” Garcia said, “is that we’re not starting from scratch. We have tools that give us a fighting chance to push back.”

Indeed, the pushback has already produced results — painful ones for Hinkle and Timmermans.

By late November, the Regulation and Licensing Department will begin announcing the winners and losers — those who will be able to grow and sell cannabis, and those who won’t.

Hinkle and Timmermans have already lost. Timmermans said he’ll do his best to make use of the land they bought, but Hinkle plans on leaving. “I wanted to build my life here in New Mexico,” he said. “But New Mexico is going to push me out.”