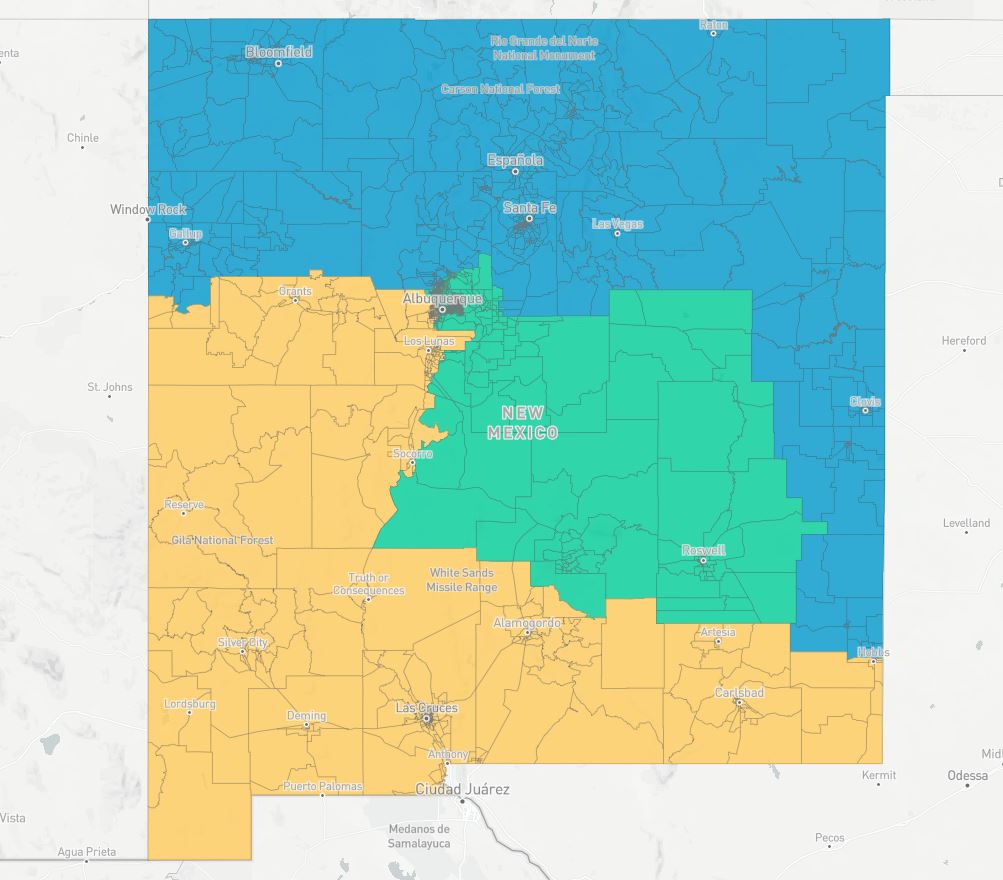 The newly formed New Mexico Citizen Redistricting Committee, tasked with presenting new political maps for the state Legislature to consider, decided on a series of maps last week, but still has more work to finish this week.

The committee approved three map concepts on Friday for congressional districts, state Senate districts and the state’s Public Education Commission. But the group is scheduled to meet again this week to approve state House districts.

Largely at issue throughout conversations during last week’s meeting was whether the committee should push for “status-quo” maps or instead opt for maps that make significant changes to how certain districts are drawn, particularly with congressional districts.

Congressional Concept A, for example, aims to keep New Mexico’s three congressional districts relatively similar to what they are now. It would keep Torrance and Bernalillo Counties in the First Congressional District, along with Placitas and the town of Bernalillo.

Former Democratic state Senate Majority Leader Michael Sanchez, who was appointed to the committee by New Mexico Speaker of the House Brian Egolf, D-Santa Fe, advocated making changes to congressional districts that would group areas that have not been grouped together before. But former New Mexico Republican Party Chair Ryan Cangiolosi, who was appointed to the committee by House Minority Leader James Townsend, R-Artesia, warned against changing map boundaries without a justified reason.

“Change for just change’s sake sometimes, we’ve seen in history, is not good,” Cangiolosi said. “It doesn’t move anything forward.”

Later in the meeting, Sanchez defended making significant changes to congressional districts by saying that if certain communities that have raised concerns about their congressional representation, “can vote for the person of their choice,” then it is a “good change.”

Albuquerque-based attorney and former state Senator Lisa Curtis, who was appointed to the committee by Senate President Pro Tem Mimi Stewart, D-Albuquerque, agreed with Sanchez’s sentiment and further said the committee should be providing the Legislature with new ideas.

“I think we’re sort of abdicating our responsibility by just putting the status quo map out for the fact of it,” Curtis said.

Below is a breakdown of the congressional and state Senate districts the committee has approved so far.

Congressional Concept A would mostly keep the three districts the same, leaving Isleta Pueblo and Cibola County in the 2nd Congressional District. The committee approved the “status quo” map by a 4-3 vote.

Congressional Concept E, would make some significant changes, including placing Albuquerque’s South Valley into the state’s southern district and grouping southern, rural areas like Carrizozo and Ruidoso with Northern rural areas like Mora and Springer. The committee nearly unanimously approved that concept by a 6-1 vote.

Congressional Concept H, which was submitted by a coalition of community advocacy groups, would also make sweeping changes to the three congressional districts and would create a southern district with a Hispanic majority of those old enough to vote. The committee approved that concept by a 5-2 vote.

The committee approved three state Senate maps, but two of them were only recently added to the list of options and they have not been posted to the committee’s website. The one concept map approved by the committee that is also posted online is Senate Concept C.

Even after the committee meets this week to decide on state House Districts, the Legislature will be tasked with making a final decision. But Gov. Michelle Lujan Grisham will first have to call lawmakers to a special session, which she is expected to do soon after the redistricting committee finishes its work.