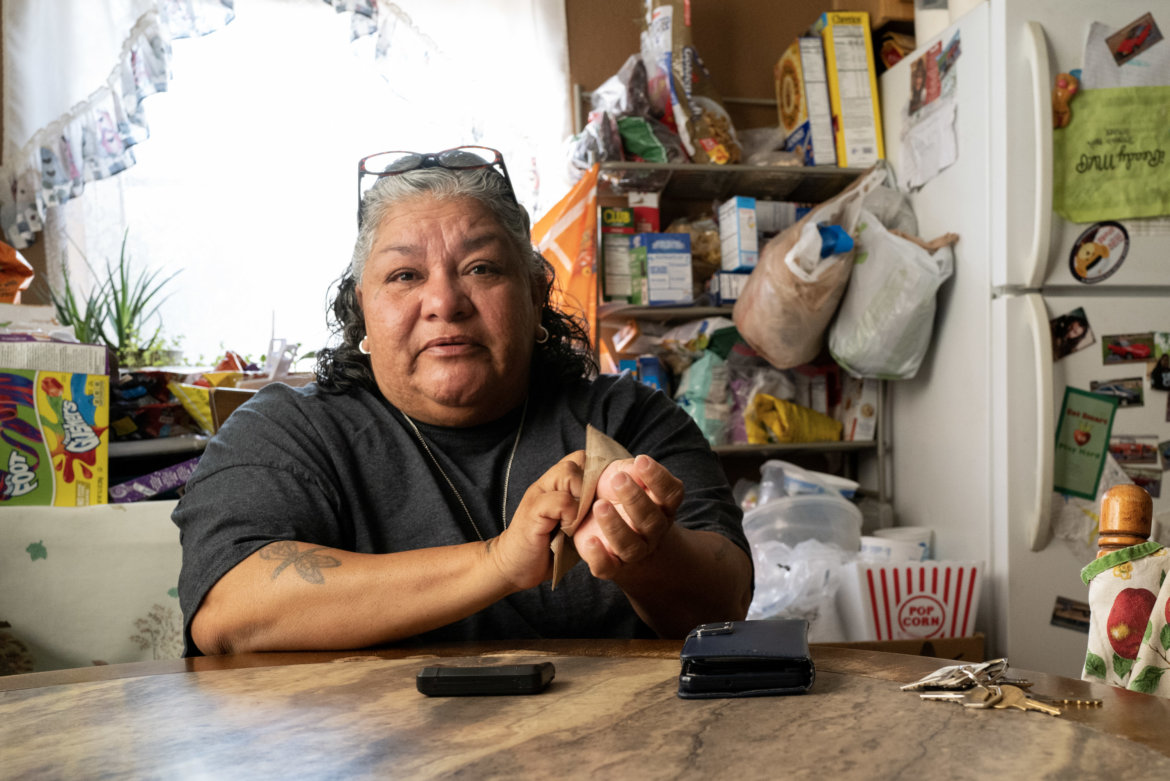 Renee Garnett is a regular at Sagebrush Church in Albuquerque, where Sunday prayers are led by a five-piece worship band and everyone gets a chance at a better life. On Oct. 9, the 51-year-old grandmother took a seat near the front of the sanctuary, her greying hair pulled back tight, her black rectangular reading glasses resting on her forehead. She was one of the first to jump to her feet when the music swelled.

Garnett had a lot to pray for. For the past week, she and her 13-year-old grandson hadn’t had a home.

“I’m losing hope in finding a place,” she said. “Coming to church keeps me hanging on, because I know God works miracles. I know he does. I wish he could do it for me now.”

This story by Searchlight New Mexico is republished with permission.

Her landlord terminated her lease at the end of September, and though she’d been given six weeks advance notice, she wasn’t able to find a single available apartment whose landlord would accept a Section 8 voucher. The federally funded housing assistance program covers most of her rent, but it only works when a landlord agrees to participate.

Garnett’s predicament exemplifies a worrisome trend seen by New Mexico housing advocates and housing authority directors: It’s increasingly difficult for tenants with Section 8 vouchers to find landlords to rent to them, leaving people like Garnett and her grandson with fewer and fewer options. Despite several attempts by the state and federal governments to provide pandemic-related housing assistance, people with little money and resources still aren’t getting the help they need.

“More and more landlords are not taking the Section 8 voucher,” said Betty Valdez, director of the Bernalillo County Housing Department, which currently provides vouchers to about 2,200 households, including Garnett’s.

Valdez, for her part, suspects that skyrocketing rents are a major factor. Rents around the country have risen 14 percent since March 2020, according to estimates from Apartment List. The increase in Albuquerque has been particularly extreme: 28 percent during the pandemic. In September, the average two-bedroom apartment in Albuquerque cost an estimated $1,235 a month.

“They’re able to demand a higher market rent than I can give them as a housing authority,” Valdez said.

A tenant with a voucher typically pays 30 percent of their income on rent, while the voucher covers the rest — up to a limit, which is updated yearly. If the apartment is more expensive than the limit, the tenant must pay the remainder or find a different place to live. Garnett’s voucher limit is $940 a month, including utilities.

“Occupancy levels are so high,” said Linda Bridge, executive director of the Albuquerque Housing Authority. “Rents are increasing. It’s difficult for people to utilize their vouchers.”

Research shows there are other reasons landlords might not accept Section 8 vouchers. They may not want to navigate the government bureaucracy, or they may have had negative experiences with Section 8 tenants in the past.

The executive director of the Apartment Association of New Mexico declined an interview request. In an emailed statement, Alan LaSeck said he would “not comment on sensational journalism that is being used to incite chaos and used for a political agenda.”

Section 8 vouchers, officially called Housing Choice Vouchers, are so named because tenants can choose where to live and aren’t required to live in public housing projects, cheap apartments, or poor neighborhoods. About 11,500 households in New Mexico receive benefits through the program – approximately 1.5 percent of the state’s households, according to federal data. That’s slightly lower than the country-wide rate, which stands at 1.9 percent.

But the choice only exists if there are enough landlords willing to rent to Section 8 tenants.  Otherwise, it turns into a crueler choice — between a bad place to live and no place to live at all.

Over the past few months, Garnett spent hours upon hours driving around Albuquerque in her 1997 Pontiac Grand Am, looking for a home. She chronicled her progress in a dog-eared black notebook wedged between her seat and the console, crossing off the names of apartment buildings one after another. On a Wednesday in the middle of September, she headed to a neighborhood about 10 minutes north of the University of New Mexico where she’d heard there was an apartment available.

A row of two-story buildings stood in pastel colors against the scorching Albuquerque sky — dirty white, pavement gray, mustard yellow, raw salmon. She couldn’t find the building she was looking for — the number appeared to be missing — but that didn’t matter. She was getting a bad feeling about the place.

“There’s some stuff that goes on when the lights go out,” Garnett said. As if on cue, she drove past a 31-year-old beat up Honda Civic station wagon, its front windshield spiderwebbed and its back window missing completely. The license plate was absent, and the trunk was strewn with trash. In a past life, the car might have been silver. “I can just tell this is not an area that I want to live in.”

Whatever apartment she rents will be for herself and her grandson, who wants a yard and a dog and the certainty that he’ll be able to stay in the same school and keep his friends. He had a traumatizing childhood, living for years with foster families. His dad is in federal prison in Virginia. Garnett wants her grandson to have a better life than she was able to give her own children, and she knows  the area where they end up will have a big impact. “We want to stop the cycle of violence and drugs,” Garnett said. “How are we going to do that if we live in that community?”

A lot can change in a matter of blocks, especially in Albuquerque.

A few minutes north, Garnett passed a collection of two-story buildings that looked in much better repair — Villas Esperanza, a 188-unit development near Comanche and Carlisle. The buildings were painted white with olive green trim and surrounded by a black metal fence with gates that opened and closed. “NOW LEASING,” declared a yellow banner with images of balloons. Garnett called the number. Yes, they took Section 8, and yes, they had two-bedroom apartments — but nothing was available until the end of October, a month after Garnett needed to find a place. “Ok, well, I appreciate your time,” she said politely.

She made a note of it anyway, just in case her landlord would let her stay a little while longer. One perk of Villas Esperanza, she said, was that they didn’t require a monthly income that’s two or three times the rent, a situation she’s run into before. She estimates that her total monthly income is about $1,300, including food stamps and disability payments — she suffers from post-traumatic stress disorder, as well as panic and anxiety disorder. She also has fibromyalgia, a painful disease that has prevented her from holding down a job.

Garnett needed to head home to prepare for a doctor’s appointment, so she turned south on Carlisle and then east on Aspen. Now, instead of sprawling apartment complexes and busted-out cars, there were single family homes with yards and private garages. She passed Altura Park, where oak and elm trees towered over city tennis courts.

“I like it when it’s real woodsy like this,” Garnett said. She used to go camping with her grandson, borrowing her cousin’s truck to drive up into the Jemez Mountains and the Pecos Wilderness. The young boy loved it, she recalled: “‘Grandma, we’re sitting out here by a campfire and it’s snowing and you can hear the river and it smells so good.’”

She passed a “FOR RENT” sign in front of a one-story white house with a neat front yard of landscaped rocks. “Yes!” she exclaimed. She pulled over and called the number, but the landlord would not accept Section 8.

A nearby house boasted a pomegranate tree, the fruit just starting to ripen.

Part of the reason Garnett has had so much trouble finding a place is that it’s perfectly legal for New Mexico landlords to refuse Section 8 vouchers. That’s not unusual; it’s the case in at least 18 other states as well.

A bill in the 2021 state legislative session would have outlawed this practice, but the provision was removed during negotiations and the bill died in committee. Rachel Biggs, chief strategy officer at Albuquerque Health Care for the Homeless, said that advocates might try their luck again in the future.

A spokesperson for Gov. Michelle Lujan Grisham did not respond to an inquiry about whether the governor would support such a change.

With nothing forcing landlords to participate in the program, tenants with vouchers can search for weeks or months before finding a place to live.

Housing authorities in Albuquerque and Bernalillo County don’t track such data, nor does the federal government.

And vouchers don’t come with an unlimited life span. Tenants are initially given 60 days to use their voucher, after which the local housing authority can grant an extension. Housing authorities in Albuquerque and Las Cruces have been issuing more and more extensions lately.

“The demand is there, but there’s not the availability,” Rivera said. “Our families are having a hard time.”

In Albuquerque, 81 percent of households with Section 8 vouchers live in its most impoverished neighborhoods – zip codes where the median household income falls below the city average of $54,000. That’s according to estimates from the U.S. Census Bureau, as well as data from the Albuquerque and Bernalillo County housing authorities.

The largest number of Albuquerque Section 8 voucher households live in zip code 87108. That includes the area Garnett calls the “War Zone,” a section of southeast Albuquerque known for underinvestment, poverty, crime and drugs.

Garnett knows the area well — she’s lived there before and doesn’t want to return. It’s where her three grown children live, afflicted by addiction and poverty.

By mid-October, Garnett had moved out of her apartment and was staying with family on the west side of town. It was difficult to have so many people under one roof, but she wanted her grandson to have a bed. “If I didn’t have him, I would be sleeping in my car.”

The landlord had terminated her lease after complaints from neighbors, according to an interview with the building’s property manager. Garnett said she was never given a reason, despite calling the property management company multiple times.

She’s worried about how the instability might affect her grandson, a concern that comes from her experience raising her own children. Back then, she was addicted to drugs — she’s been clean 24 years, with only one relapse — and the family moved frequently. “The instability makes them feel it’s OK, they can do whatever they want, without following rules, following laws,” she said. Garnett wants something different for her grandson.

“He’s at that age. He can go in either direction.”