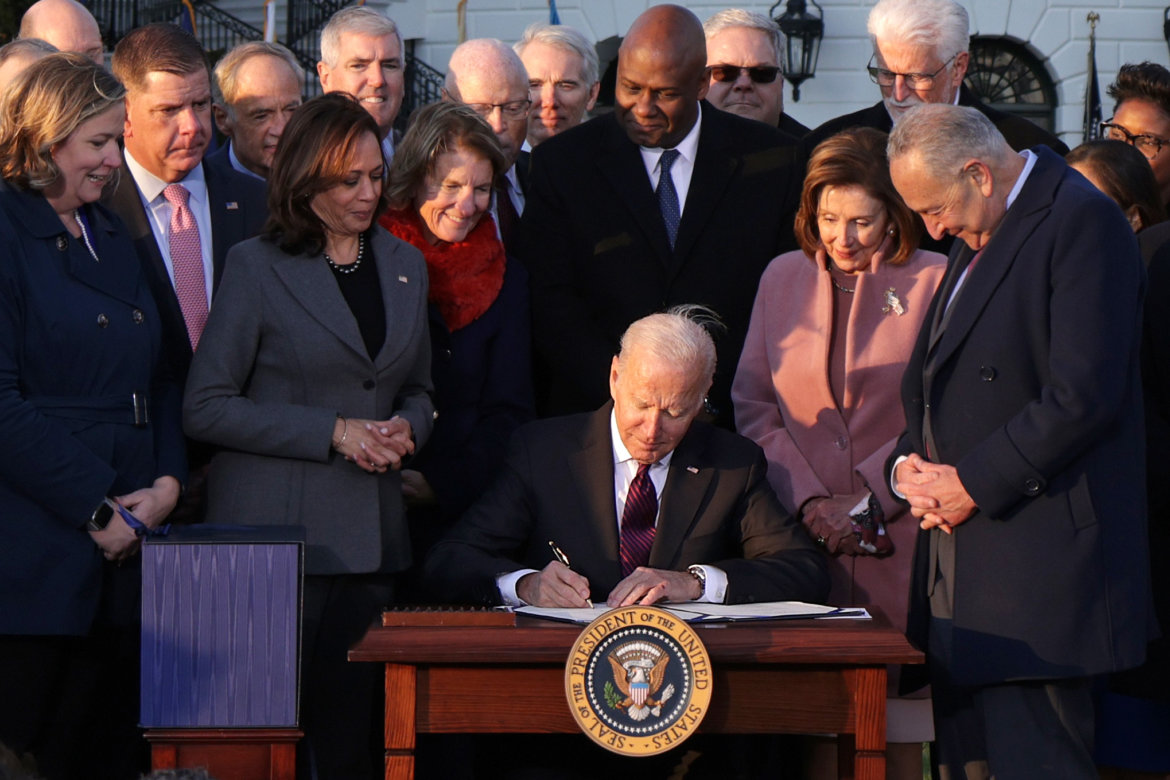 WASHINGTON, DC - NOVEMBER 15: U.S. President Joe Biden signs the Infrastructure Investment and Jobs Act as he is surrounded by lawmakers and members of his Cabinet during a ceremony on the South Lawn at the White House on November 15, 2021 in Washington, DC.

The $1.2 trillion Infrastructure Investment and Jobs Act has been touted as the largest infrastructure investment since the New Deal. During the signing ceremony, Biden said “we’re taking a monumental step forward to building back better” and praised the bipartisan effort to get the package passed. He further described the law as a “blue-collar blueprint to rebuild America.”

“My message to the American people is this: America’s moving again and your life is going to change for the better,” he said, highlighting funding to replace lead water pipes and service lines and expanding access to affordable, high-speed internet.

Biden said he will now visit areas like a structurally unsafe bridge in New Hampshire and union workers in Detroit who are building electric vehicles.

The package will bring $3.7 billion to New Mexico for infrastructure investments, primarily in road projects. It also includes funding for water projects that are currently underway including the Navajo-Gallup Water Supply Project and the Eastern New Mexico Rural Water Project.

New Mexico Gov. Michelle Lujan Grisham was one of the governors who advocated for the bill. She attended the signing ceremony and said the law provides funding for much needed improvements while also creating jobs in communities across the country.

As politicians celebrate the signing of this legislation, the budget watchdog organization Taxpayers for Common Sense argued that the impact of the package is overstated because only approximately half of the $1.2 trillion of funding is going to new projects. Many of the projects included in the bill would have occurred without the legislation, the group said.

Related: NM poised to get billions of dollars in funding for infrastructure

U.S. Sen. Ben Ray Luján attended the signing ceremony as several pieces of legislation he championed were included in the final bill. This includes the REGROW Act, which provides funding for the cleanup of orphaned and abandoned oil and gas wells. Luján co-sponsored the legislation with Sen. Kevin Cramer, a Republican from North Dakota—a state that also has a large number of orphaned wells.

These wells that no longer have an operator can be both an environment and health problem.

Luján told NM Political Report about a visit he made to a well site in southeastern New Mexico where he saw oil pooled on the ground and in a bucket. He said there were cow hoofprints in the mud and it appeared that the livestock had been drinking the contaminated water. Luján said this impacts the beef produced in the area, which is then consumed by humans, and also impacts the aquifers and landscape.

Luján said this is an important step, but more work is needed to ensure that oil and gas wells that are currently in operation are not eventually abandoned. This includes a bill sponsored by U.S. Rep. Teresa Leger Fernández, a New Mexico Democrat, that would create an idle well fee and increase bonding requirements.

Biden said no parent will have to sit in a parking lot ever again so that their child can access the internet to do their schoolwork.

The infrastructure package will provide an estimated $750 million for expansion of broadband service in New Mexico. This money will be available for both building out the broadband infrastructure to currently unserved areas as well as making it more affordable. Luján said the goal is to make the internet accessible to as many New Mexicans as possible and “if we are innovative in New Mexico, there’s no reason we can be north of 98% of families.”

Luján said the next step for the state will be to work with local leaders “across every corner of the state” to develop a plan that will be submitted to the U.S. Department of Commerce. Once that plan is approved, New Mexico will be able to access a state grant program available through the National Telecommunications and Information Administration to build out the program.

The package also includes $3 billion to remediate more than 500,000 abandoned mines nationwide, including in New Mexico.

U.S. Sen. Martin Heinrich, a Democrat from New Mexico, was one of the sponsors of this legislation.

“We applaud the inclusion of a dedicated program to address the problem of abandoned mines and thank Congress and the President for working together on behalf of mining-impacted communities,” said Lauren Pagel, the policy director for Earthworks, in a press release following the signing ceremony. “Too many American communities live with, and pay for, pollution left behind by mining companies. This investment is an essential first step towards holding them accountable for their pollution, while providing needed jobs transforming landscapes scarred by hardrock mining.”