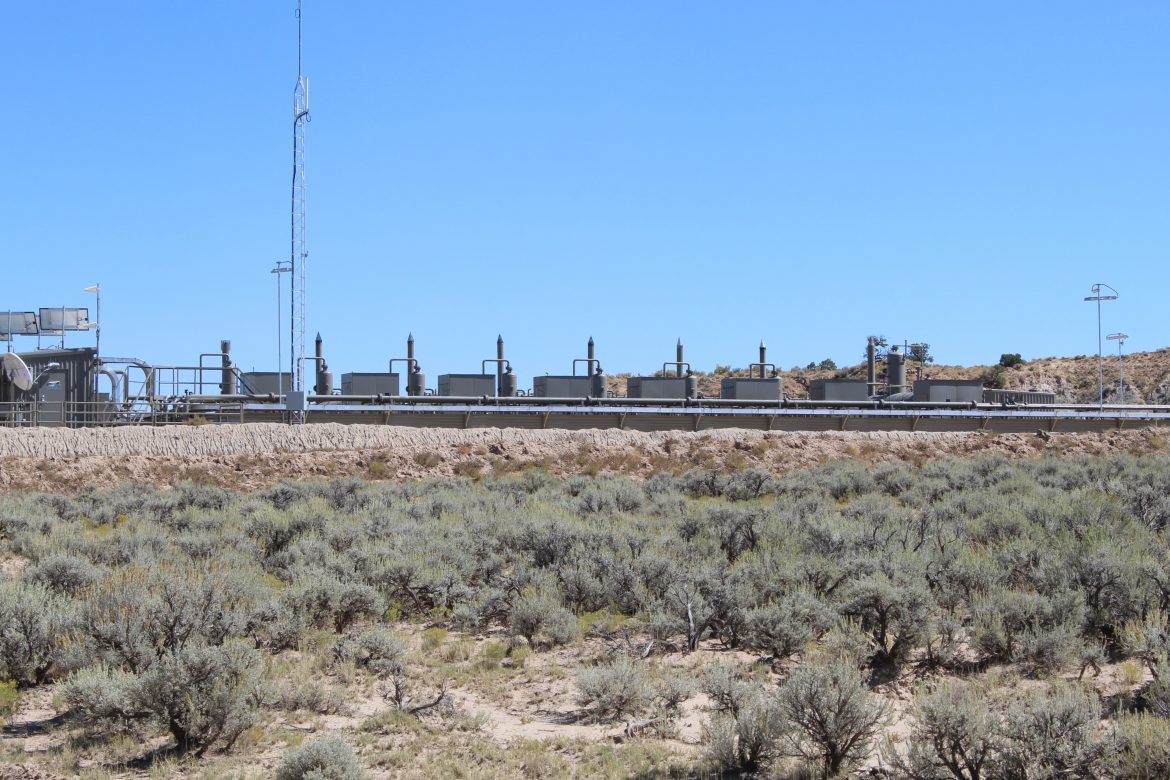 A well site in the Greater Chaco region.

Monday, the president announced a series of initiatives focused on Indigenous communities, including the Chaco Canyon buffer zone. This came during the Tribal Nations Summit.

The president instructed the U.S. Department of the Interior to initiate the process for withdrawing the area around the park from new oil and gas leasing for two decades.

Over the last decade, Native American groups in both Arizona and New Mexico have been lobbying for protections of the sacred Chaco region from oil and gas development, leading to several congressional actions that temporarily deferred leasing. The action announced today creates a longer-term protection for the area.

Many of the allottees in the area rely on revenue from leasing on their lands. These allottees have been concerned that a buffer zone could impact their ability to make money off their remote property in an area with few economic opportunities. According to a White House fact sheet, the withdrawal will not apply to individual Indian allotments or to private lands or lands owned by the state of New Mexico or Tribal entities. The state has already issued a moratorium on new leases on state land within the 10-mile buffer zone.

This comes after Democratic members of New Mexico’s congressional delegation sent a letter to the president asking for such protection.

At the same time, the country is working to transition away from reliance on fossil fuels. Luján said that  “we’re going to have to do our due diligence going forward to be smart about how we are using energy and what the United States is doing to be leaders as it pertains to our response to the climate crisis, and how we’re creating job opportunities in New Mexico as part of this as well.”

Today’s announcement also comes after the federal Bureau of Land Management  released a draft Mancos-Gallup resource management plan amendment for the Farmington Field Office in 2020. The amendment recommended allowing oil and gas drilling within that 10 mile buffer zone. Oil and gas leasing within the buffer zone has been deferred over the past decade due to concerns about the impacts it could have on sensitive cultural sites.

In May, U.S. Sen. Martin Heinrich sent a letter to U.S. Department of the Interior Secretary Deb Haaland asking her to begin the process of permanently ending drilling within the buffer zone.

Haaland, a former U.S. congresswoman from New Mexico, has cultural ties to Chaco Canyon and the Greater Chaco region. While in Congress, she pushed for legislation that would have codified the buffer zone.

“Chaco Canyon is a sacred place that holds deep meaning for the Indigenous peoples whose ancestors lived, worked, and thrived in that high desert community,” said Secretary Deb Haaland in a press release. “Now is the time to consider more enduring protections for the living landscape that is Chaco, so that we can pass on this rich cultural legacy to future generations. I value and appreciate the many Tribal leaders, elected officials, and stakeholders who have persisted in their work to conserve this special area.”

In a press release, Heinrich said he was grateful for Haaland’s work to protect the sacred landscape.

“Today marks the beginning of the end of short-term policies that shift every year to the long-term certainty that this unique place will be protected,” Heinrich said. “Chaco Canyon is one of the most precious landscapes on Earth and holds deep meaning for Tribes, Pueblos and communities in northern New Mexico.”

Lujan also praised Haaland’s efforts and said without her he does not think many of the initiatives announced today, including the process of withdrawing lands around Chaco from mineral development, would have happened.

While the Department of the Interior is beginning the process of withdrawing federal lands near Chaco from new oil and gas leasing, Luján said that it is important to pass legislation that would protect the landscape from fossil fuel extraction. This would prevent future presidents from undoing the withdrawal.

At the same time, he said it is important to protect the allottee rights. Legislation Luján has sponsored in the past as a member of the U.S. House of Representatives included protection of allottee rights.

“My legislation does provide those clear protections for allottees and I don’t believe that those rights specifically for allottees have ever been applied in the way that I’ve tried to get them protected and put into law,” he said.

In terms of missing and murdered Indigenous people, Lujan said previous administrations have made efforts in the past to address this crisis but the Biden administration has gone further than his predecessors by bringing various federal agencies that are responsible for improving public safety and justice together to address the epidemic.

“I would say this appears to be the most significant action taken by any president to acknowledge and to put in place effort to improve public safety and justice for Native Americans and to address the epidemic of missing or murdered indigenous people,” he said.

At the same time, Luján said legislation passing legislation like the Violence Against Women Act is important to further adderess the crisis of missing and murdered Indigenous peope.