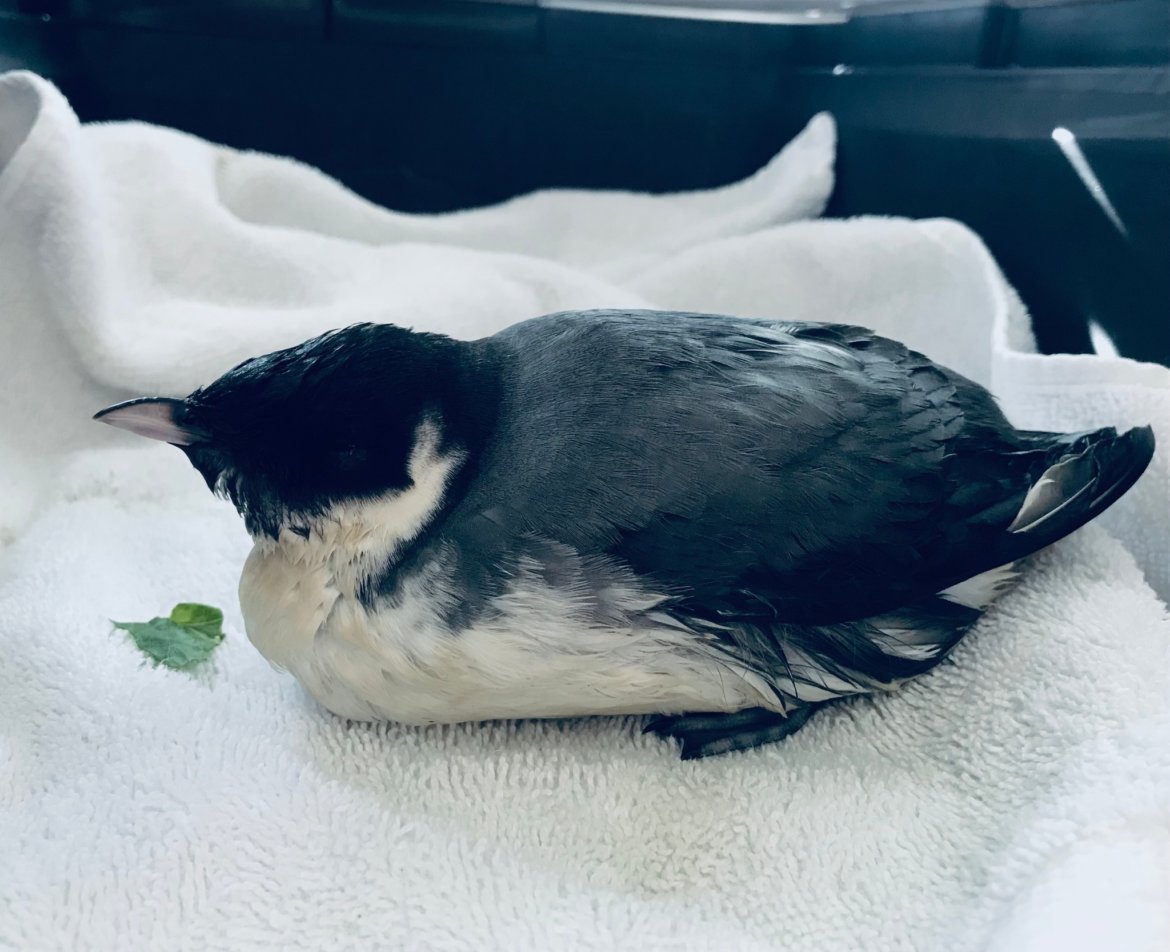 Mikal Deese/On a Wing and a Prayer

An ancient murrelet was found in Placitas and taken to a rehab center.

Mikal Deese has rehabbed more than a hundred species of birds at her non-profit rehabilitation center in Corrales, but last week she received a bird that she’d never seen before.

The small black and white bird was found unable to fly on the side of a trail in Placitas and was brought to her On a Wing and A Prayer rehab center in a box. Upon opening the box, Deese knew the bird was far from where it belonged.

She identified the bird as a murre–a seabird that rarely comes to shore. And, based on its size, she knew it was a murrelet, a small species of murre. The plumage and markings matched the ancient murrelet, a seabird that lives in the Pacific northwest and north into the arctic.

“We don’t know where it came from. I wish we did,” Deese said. “It does not belong anywhere close to here. The poor little guy got lost.”

The ancient murrelet was half the weight that it should have been and, had it not been for its thick feathers, its keel bone would have been prominently visible. The long journey from its native habitat left it emaciated.

“Obviously he’s come a long way to get here. He was finally down, unable to fly. He was still alive but certainly not healthy,” she said.

Deese went to work trying to save the bird, giving it fluids and feeding it a special food for fish-eating birds.

She contacted international bird rescues located on the west coast for further advice on how to care for the murrelet, which feeds upon tiny fish and zooplankton that it catches while swimming under the water. The rehab centers she contacted are focused on caring for sea birds and have responded to oil spills. She left a message on their phone lines saying that she had an ancient murrelet in New Mexico.

Deese imagines that the rehabbers in California were giggling about the thought of a murrelet in New Mexico. They asked her to send a picture to confirm the identification. When she sent the picture in, she said they immediately called her back and confirmed that it was an ancient murrelet.

Despite her efforts, the ancient murrelet was too badly emaciated to survive.

“He was alive at midnight and, by six the next morning, he was dead,” she said. “I wish I had a few more miracles. Sometimes I can pull one off, but not this time.”

Deese also submitted the picture and information to the New Mexico Birds Records Committee as a rare bird report.

This is the second time an ancient murrelet has been found in the state. The last time the species was seen in the state was in the 1980s. The murrelet was found on Nov. 6, 1985 sitting on a highway near Tano Road in the Santa Fe area. It was then taken to a pet shop and placed in an aquarium, where it died the following day, according to the specimen report.

The ancient murrelet are clumsy on land, since their feet are located far back on their body to propel them through the water.

While this is only the second report of an ancient murrelet in New Mexico, there have been other reports of the species venturing inland, including reaching the Great Lakes. Last winter, Minnesota’s birding community was excited about the state’s eighth sighting of an ancient murrelet, according to the American Birding Association.

New Mexico has also had a long-billed murrelet found, which was discovered in 2009 in a brine pool associated with a potash mine in Eddy County and was identified using DNA sequencing.

Deese said birds that are on the ground and unable to fly, with the exception of fledglings in the spring and early summer, need help from rehabbers. She said if anyone finds a bird in that condition, they should place it in a box in a dark location and contact a licensed rehabber. They should not attempt to feed the bird or to force it to drink water. People can find a rehabber by going to ahnow.org.