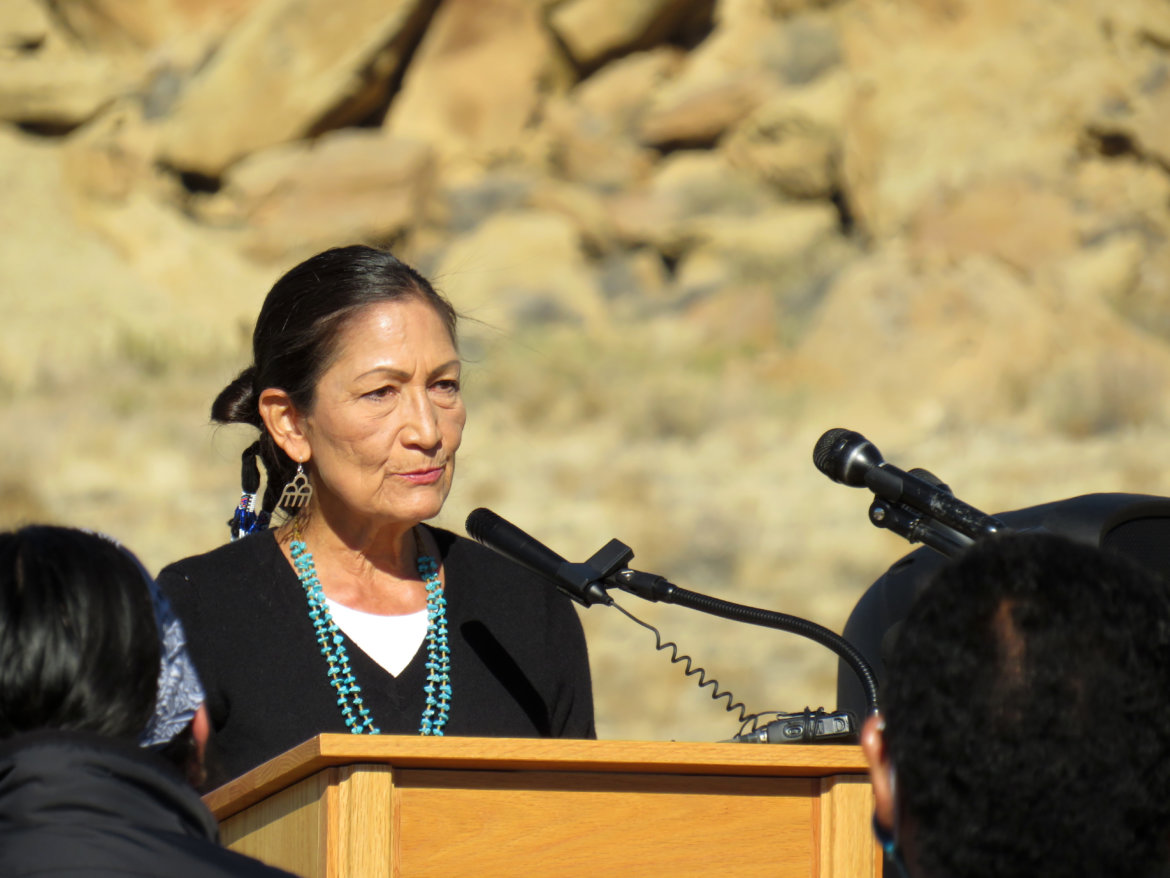 As the U.S. Department of the Interior begins the process of placing a 20-year moratorium on new oil and gas leasing on federal lands near Chaco Canyon, some nearby Indian allottees say that such an action would limit their ability to make a living off of their land. Meanwhile, proponents of the moratorium say it is needed to protect the sacred sites, lands and waters.

Interior Secretary Deb Haaland drove by signs protesting the moratorium as she headed to Chaco Culture National Historical Park to celebrate President Joe Biden’s announcement of the moratorium impacting federal lands within a ten mile buffer of the park.

While at the park, Haaland met with Indigenous and state leaders before addressing the crowd that had gathered for, what she described as, a celebration that was decades in the making.

“It is not difficult to imagine centuries ago children running around the open space, people moving in and out of doorways, bringing in their harvest or preparing food for seasons to come. A busy, thriving community,” she said. “When I look at the sky and the mesas, I am grateful that the Pueblos and the Navajo Nation and all the communities can share this beautiful landscape together.”

“They knew that we only have one planet,” she said. “Not unlike our ancestors, the land gives us everything we need to sustain ourselves and we must care for it. That is why we are here today. We’re here because President Biden and I heard your voices and are taking important steps to take care of our land, our air and our water.”

Many of the speeches given by the Indigenous leaders referenced Chaco Canyon by the names their ancestors had given the place, highlighting the diverse group of people who have ancestral ties to the landscape. These include the various Pueblos, the Hopis and the Navajo.

“For many, many years, a chorus of pueblos and tribes have called for greater protection for the Chaco Canyon, and the greater Chaco region,” said Brian Vallo, the governor of the Pueblo of Acoma. “Our fight to protect the sacred place is rooted in what our elders teach us, and what we know as descendants of those who settled here, that it’s our responsibility to maintain our connection, our deep felt obligation and protective stewardship of the sacred place. When our ancestors left Chaco, their departure was not an abandonment. Leaving Chaco was a purposeful part of their journey…The cultural resources that you see before you in the homes, the kivas, pottery, petroglyphs are sacred shrines, and other resources were purposefully placed and left here in the greater Chaco region. They are the footprints in this incredible landscape by our ancestors.”

Navajo Nation Council Delegate Daniel Tso said the aquifer in the Chaco region is pristine and communities like the Ojo Encino Chapter of Navajo Nation rely on the aquifer for drinking water.

“As an allotment owner, I really feel like the greater Chaco landscape needs to be protected,’ he said. “Ojo Encino and Counselor and Torreon are under siege. A fracking tsunami is headed that way.”

Haaland, herself a member of the Pueblo of Laguna and a descendant of the people who once lived at Chaco Canyon, said there will be an initiative called Honoring Chaco that will include opportunities for people like the allottees who were gathered at the park entrance protesting the moratorium to voice their concerns.

“This also kicks off an opportunity for public comment,” Haaland said.

She said she encourages the allottees who were protesting and placed signs along the road to continue to make their voices heard.

Allottees like Delora Hesuse and Ervin Chavez say their voices have not been heard and that, while they acknowledge a transition away from fossil fuels is inevitable, such a moratorium will leave their communities behind.

“We get these officials in, but they don’t take the time to listen to what we have to say,” Hesuse said.

Native American lands, including Tribal holdings and Indian allotments, are not included in the moratorium. But Hesuse said that doesn’t matter. She said the oil and gas companies explore large areas when deciding where to drill and the checkerboard land ownership in the area means that closing off state and federal lands to new leases also leads to an end of new leases on allottee lands. A moratorium on new oil and gas leases on state lands within 10-miles of the park has been in place since 2019.

“They say that we’re not going to be affected, but we are,” Hesuse said.

The remote area with little or no cell service, roads that can become impassable during storms, limited access to electricity and no water access makes it hard for the allottees to make a living off of their lands. Hesuse said there have been discussions about economic diversification, but the allottees have not seen plans for projects like solar arrays. She said there has been discussion about fiber optic lines going through the allottee land, but questions about these lines have not been answered.

Chavez said people come to Chaco Canyon from all over the world and then get to go back to their homes where they drive on paved roads, have running water and can turn on a light switch. But the allottees don’t have those opportunities.

“They want to keep Indian people primitive the way they are so they can just come out every once [in a while] to enjoy it,” he said.

Chavez also pointed out that ancestral Puebloan sites that are in areas with more opportunities for economic development, such as Aztec Ruins National Monument and Salmon Ruins, do not have buffer zones around them.

At the same time, the San Juan Basin is celebrating 100 years of oil and gas extraction and, proponents of the buffer zone point out, little has changed in that time period for the communities around Chaco Canyon. In the northern part of the San Juan Basin near Aztec and Farmington, a lot of the oil and gas activity involves recompletions of existing wells. The southern part of the basin near Chaco is where more of the new wells are being drilled.

Those communities face toxic air emissions from the extraction sites, increased traffic on the already rough roads and increased crime, as was highlighted in the draft Bureau of Land Management Farmington Field Office’s Mancos-Gallup Resource Management Plan amendment. This amendment’s recommended decision called for oil and gas leasing within the 10-mile buffer zone.

Efforts are underway to pass a law permanently protecting the region

While the proponents of the buffer zone celebrated the moratorium, efforts are underway in the U.S. House of Representatives and the U.S. Senate to pass laws setting aside the land around Chaco Culture National Historical Park from drilling. This will ensure the actions taken under Biden’s administration are not reversed by a future president.

U.S. Rep. Teresa Leger Fernández, a New Mexico Democrat, is leading that effort in the House of Representatives.