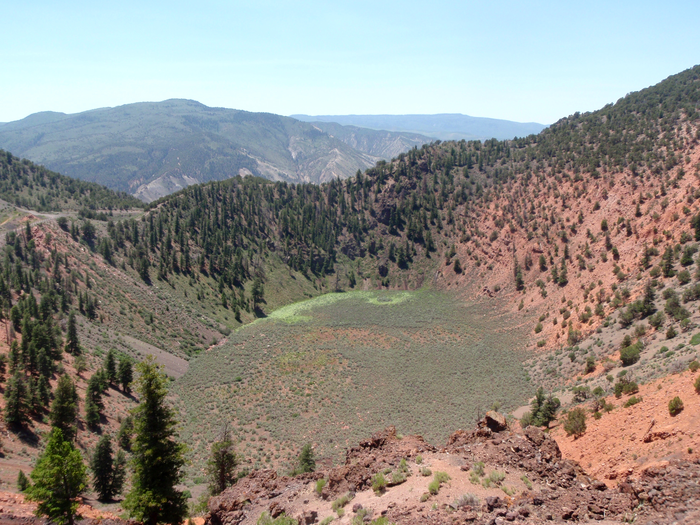 A view of the crater of Dotsero volcano, a monogenetic volcano that erupted in Colorado about 4,000 years ago.

The southwest United States has thousands of volcanoes that were only active for a very short period of time and, a new analysis published in the journal Geosphere urges emergency managers to be aware of the potential for further volcanic activity.

The authors of the study counted 2,229 volcanoes in 37 volcanic fields located in the southwest United States and northern Mexico. While it is dotted with volcanic fields, the region has not received the same amount of attention for its volcanism as some other areas of the country such as the Pacific Northwest, which is home to volcanoes like Mount Saint Helens and Mount Rainier.

Greg Valentine, a lead author on the paper and a geology professor at the University of Buffalo, said one reason that the volcanoes in the southwest have not received as much attention is that no eruptions have occurred since geology became an official science in the 1700s. Meanwhile, the Cascade Range of the Pacific Northwest has had modern explosions, such as Mount Saint Helens.

This makes monitoring for future eruptions a bit more challenging.

Valentine said at Mount Saint Helens scientists know that the next eruption will also occur at the mountain, even if the exact place that the explosion will occur on the volcano is unknown. Because of that, they are able to place monitoring equipment around Mount Saint Helens.

“For this issue in the southwest, though, it’s a much more complicated problem because the area that we’re talking about is huge, obviously,” Valentine said.

He said the eruptions will likely occur in a volcanic field like the ones documented in the paper, but those fields are quite large, making it complicated to determine where the best place is to put monitoring instruments. Earthquakes can be a warning sign of future volcanic activity and can be detected using instruments like seismometers. However, if these instruments are located too far away from the epicenter, they won’t even be detected.

Valentine said the U.S. Geological Survey and academic researchers are working to figure out ways to prioritize areas for monitoring systems.

“We have a large number of volcanoes, they’re small, they’re monogenetic, they only live once. We know that there will be more of these volcanoes in the future. So we should be at least thinking about them from the hazards perspective,” Valentine said.

A monogenetic volcano is one that erupts once before becoming extinct. These eruptions can last a few hours or decades. They also tend to form volcanic fields.

Valentine’s interest in the volcanoes of the southwest dates back to his childhood in northern New Mexico.

“As a kid, I used to go walking across the mesas and was really interested in the landscape and the rocks and so forth and learned later on that it was volcanic,” he said.

Valentine has been researching the volcanoes in the southwest off and on since the 1990s. He said, over time, it became clearer and clearer to him that these volcanoes do pose a potential hazard that people should be thinking about.

It is estimated that the last eruption in the southwest occurred less than a thousand years ago. Ort said there is dispute about which one is the most recent–Sunset Crater near Flagstaff, Arizona, or another volcano near the north rim of the Grand Canyon where people who were living in the area at the time placed pottery sherds into the lava. He said these eruptions occurred between 1050 and 1200 AD. Many of the volcanoes in the southwest have not been studied enough to determine their age, Valentine said. Of the region’s more than 2,000 volcanoes, only about 25 percent of them have been dated.

Ort said there is a very slim chance–about 8 percent–that an eruption will occur in any given year in one of the region’s many volcanic fields. He said the possibility of an eruption is not something that people need to stress about, however emergency managers, such as government officials, should be aware of the possibility and should plan for such events.

Ort said people will likely be able to get away from future eruptions and he sees them as more likely to impact infrastructure than to be fatal.

However, if the lava was to interact with groundwater, it could become very explosive and dangerous.

Both Valentine and Ort spoke about these volcanoes, known as Maars, which, rather than forming a cone or peak, leave behind huge craters.

“The rising magma, the molten rock, interacts with groundwater in a certain way that causes very violent explosions,” Valentine said.

He said this can be seen in the Potrillo field in southern New Mexico and parts of Mexico.

Kilbourne Hole, located within the Desert Peaks-Organ Mountains National Monument, is more than a mile wide and more than 300 feet deep.

Regardless of how explosive the eruption is, Ort said volcanic activity will have impacts on nearby communities. For example, ash spewed into the air can impact areas hundreds of miles away.

While the Potrillo volcanic field is one of the largest volcanic fields in the state, it has not had the most recent eruptions. Ort said the youngest volcanoes in New Mexico are near White Sands and Grants and there are also volcanoes near Taos.

Both Ort and Valentine plan to further study the southwest volcanoes.

Ort said they want to learn more about how the eruptions evolved over time and how long they lasted. He said this research could use stratigraphic techniques, such as looking at erosion patterns.

While scientists do not know how frequently these eruptions occur, Ort said it has been more than 900 years since the last one in the southwest and the next eruption will likely happen while there are humans living in the region.

Valentine said eruptions could send plumes of gas up 30,000 feet into the air–impacting air traffic.

“When ash gets dispersed up into the atmosphere in one of these plumes then it blows downwind and deposits on the landscape and can interfere with electrical transmission lines to interfere with transportation on highways, railroads. So that kind of eruption can actually be quite disruptive,” he said.

Both Ort and Valentine said people do not need to be afraid about the future of eruptions, but planning is needed.

“There’s a real possibility of one of these monogenetic eruptions happening over the next 100 years or so,” Valentine said. “It’s not something that we need to be worried or scared about, but we can plan for it. And we can work on ways to improve our preparedness. Also in terms of monitoring and one of the takeaways is that this is really a wide open field of research. It’s an important hazard. But it needs much more study.”