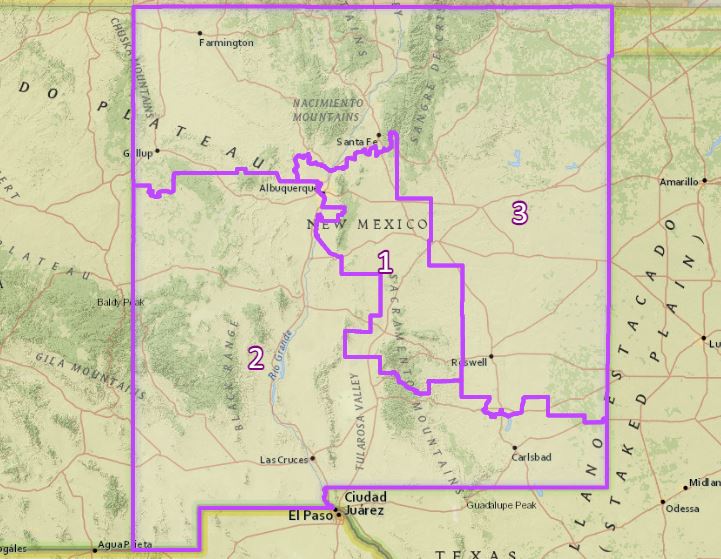 Two New Mexico state Senate committees advanced two redistricting maps on Thursday, one for Congress and one for the state Senate.

A New Mexico Senate bill that would redraw the state’s congressional districts inched closer to a full Senate vote on Thursday after the Senate Judiciary Committee advanced the bill on a 6-3 party-line vote.

SB 1, sponsored by Sen. Joseph Cervantes, D-Las Cruces, and Rep. Georgene Louis, D-Albuquerque, would make significant changes to the three congressional districts by grouping much of northern New Mexico with a portion of the southeast part of the state. The bill also suggests including rural areas like Carrizozo with much of the urban Albuquerque area. But more rural areas of Albuquerque would be included in the southern congressional district.

The proposed map is similar to what is largely being referred to as the “people’s map” which was backed by a coalition of progressive advocacy groups. Proponents of “the people’s map” have also added their support of SB 1, arguing that it would group together large populations of Hispanic and Latino voters.

During Thursday’s meeting, committee members heard public opposition to the map from a variety of different groups, including members from the New Mexico Acequia Association who said they feared their collective voice would be lost if northern New Mexico was grouped with portions of southern New Mexico.

“I hope that you will listen to the voices of us here and especially in northern New Mexico and throughout New Mexico about the changes, the drastic changes, that SB 1 will bring to [congressional district] 3,” Yolanda Jaramillo with the Acequia Association said. “It will definitely take away the voice and representation of our traditional land-based Hispanic communities of northern New Mexico that are represented by a diverse population.”

Conroy Chino, a registered lobbyist representing the Pueblo of Acoma and Taos Pueblo, said the two pueblos are concerned about splitting up Native American voting numbers.

“The tribes that I represent feel that will have an impact when it comes to their interests at the congressional level,” Chino said. “They will have competing interests from where they sit in this state, with perhaps the southeastern part of the state.”

Cervantes said he decided against using current districts as a starting point because they were decided on by a judge during the last two redistricting efforts and few changes have been made in more than two decades.

“The reason that I rejected that relatively quickly is the status quo map is a reflection of our failure 10 years ago, to come to an agreement between the House, the Senate and the governor on a congressional map,” Cervantes said. “In the end, we left here unable to come up with a congressional map at all, and ultimately left that to the courts to decide. I think that’s probably the least desirous way to do redistricting.”

The result, Cervantes added, is an out-of-date map that may have not accurately represented voters for years.

“So what we have here today, now 30 years later, is a map that’s based on just an effort to try and maintain status quo and that, of course, assumes that we got it right 20 years ago, 30 years ago.”

Moores said he was disappointed that none of the maps drawn by the Citizen Redistricting Committee made it to the Legislature and said he hopes to address the issue when SB 1 goes to the full Senate for a vote.

“I think the [Citizen Redistricting Committee] deserve that respect, the legislative process that we did deserves our respect,” Moores said.

SB1 next goes to the Senate floor for a vote, before moving to the House.

Later on Thursday, another Senate panel approved a map for its own members.

While supported by several Native American groups, other members of the public said they were unhappy with the proposal, who criticized the sponsors for not adopting a map proposed by the independent committee.

Moores also restated his frustration that none of the maps from the redistricting committee were used verbatim.

“It behooves us to tell the public and the CRC why their three maps weren’t even introduced and weren’t considered,” Moores said. “I think we need to know, the public needs to know, after going through that expense and exercise, why those three maps are just thrown out.”

Lopez told Moores that she did not reject the proposals from the redistricting committee, but instead used portions of all of them to come up with the SB 2 proposal.

“There was nothing wrong with the maps, as the CRC adopted,” Lopez said. “In reviewing them and looking over them, I mean, any one of us has the purview in which to do so, as many other organizations have. It’s the basis of what has been used for the map that we have here that we’re discussing at this point in time.”

Moores ended his comments by saying that even though he didn’t like all of the maps recommended by the redistricting committee, he thought they were done in a “fair and honest” way compared to SB 2, which he described as “politics as usual.”

Senate President Pro Tem Mimi Stewart, D-Albuquerque, later noted that SB 2 maintains almost 70 percent of one of the recommendations from the redistricting committee.

“We looked at those CRC maps in great detail, chose the one that sort of fit better to what we thought, and 68 percent of this follows that map,” Stewart said.

SB 2 next goes to the Senate Judiciary, which is largely made up of the same members as the Rules Committee.

Both the congressional and Senate map proposals will likely face lengthy debates as no Republican has expressed support for either map. Adding to the already clear partisan divide, Sen. Candelaria of Albuquerque, who announced his departure from the Democratic Party on the first day of the session, alleged that the proposed maps “deliberately dilute and gerrymander the westside of Albuquerque to preserve perceived partisan advantage for some members of the Democratic Party.”