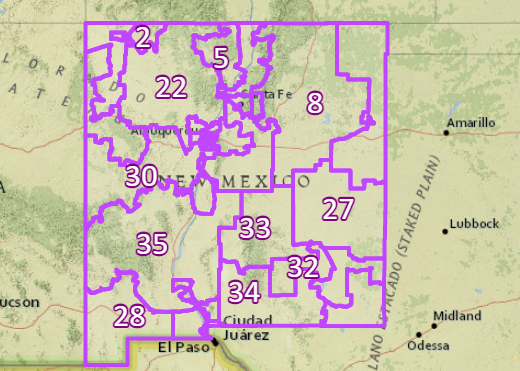 The New Mexico Senate Judiciary Committee voted 7-2 on Sunday to change a bill aimed at redrawing its own Senate districts, despite pleas from numerous Native American pueblos and tribes not to do so.

The original proposal, SB 2, adopted a Native American consensus plan that was recommended to the Legislature by the state’s Citizen Redistricting Committee to create stronger Native American voting districts.

The new version of the bill shifted district boundaries in order to protect six Republican senators from being paired with each other. Senate President Pro Tem Mimi Stewart, D-Albuquerque, who brought the substitute forward, told the committee that the replacement bill was a result of working with Senate Republicans to avoid the pairing of Republicans who represent districts in the western and southeastern parts of the state.

“In the Senate, we try very hard to be collaborative and to work as an entire body, not just one party,” Stewart said. “And so I was approached by the minority party with ideas.”

Earlier this year, a statewide Native American coalition presented a consensus map to the newly formed Citizen Redistricting Committee. That consensus map was included in SB 2.

During Sunday’s committee meeting, many representatives from numerous tribal nations and pueblos spoke out against the substitute bill on the basis that they spent months of effort to come up with a map that was agreeable to them all.

Conroy Chino, a registered lobbyist for the Pueblo of Taos, asked committee members to consider the amount of time and effort it took for the coalition to come to an agreement and urged them not to adopt the substitute bill.

“You can only imagine the challenge of bringing together 22 sovereign governments and having them arrive at a consensus and an agreement,” Chino said. “It was quite challenging and required careful deliberation and meaningful discussion in order for them to arrive at an agreement on a map.”

Pueblo of Zia Governor Jerome Lucero expressed the importance of lawmakers honoring the wishes of Native governments and asked them to adopt a state Senate map that includes the result of the months of work from the coalition.

“For many redistricting cycles throughout history, our voice was often ignored from this important democratic process,” Lucero said. “As a result, our people suffered extreme voter discrimination and lack access to representation which champions the issues at the heart of our survival. It was simply easy to ignore our people. Those are the days we do not want to go back to.”

Sens. Linda Lopez and Daniel Ivey-Soto, both Albuquerque Democrats and co-sponsors of SB 1, were the only two committee members to vote against substituting the bill.

Sen. Harold Pope, D-Albuquerque, who is not a member of the committee, spoke during public testimony and urged the committee not to adopt the change.

“I stand in strong support of Senate Bill 2, without the amendment,” Pope said. “This was a Herculean task for Native American communities to develop this consensus, they worked with us, let’s honor that.”

Sen. Bill O’Neill, D-Albuquerque, said he struggled with making a decision, but ultimately voted in favor of the substitute.

“I’m having a hard time with this, because if I support this bill, I’m suddenly not respecting the Herculean effort that the Native American committee did in the state for eight months,” O’Neill said. “I get that, but at the same time, as a person that’s as a legislator, who’s redistricting, we have the obligation to discuss and to amend at points.”

Sen. Katy Duhigg, D-Albuquerque, said she also struggled with her decision to vote for the substitute.

Duhigg acknowledged that the substitute bill would not fulfill the wishes of the coalition, but that their consensus map was largely intact.

“I don’t see that these changes would make it so that Native American voters are not able to select the candidate of their choice, which is what we’re going for here,” Duhigg said.

Keegan King, from the Pueblo of Acoma and a co-chair of the All Pueblo Council of Governors’ Ad Hoc Redistricting Committee, told NM Political Report that he doesn’t think New Mexico legislators are treating tribal government leaders as such.

“Many of our tribes are being treated as another special interest group, and that is not the case,” King said. “They are sovereign tribal nations.”

“What we received was a PDF map at 10 a.m., emailed to me, when the committee was meeting at 11,” King said. “That’s not consultation, and it didn’t give us any time to analyze the maps. We are still trying to figure out exactly what has been proposed. These tribal nations deserve better.”

The Senate was originally scheduled to debate SB 2 on the floor on Sunday evening, but after hours of caucusing, Senate Majority Leader Peter Wirth, D-Santa Fe, announced the floor session would be pushed back to Monday, a possible sign that Senate Democrats do not have enough votes to pass the bill as it stands.

On Friday, the House approved a proposal to redraw its member’s districts, keeping the tribal consensus map intact.

Correction: This story has been corrected to reflect the correct vote in the Senate Judiciary Committee