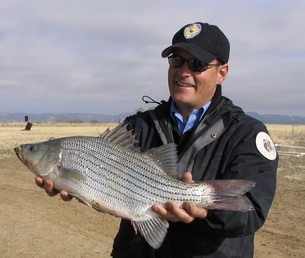 Anglers in New Mexico may soon have another fish to catch in a lake near Carlsbad.

The New Mexico Department of Game and Fish is considering stocking Caballo Reservoir with hybrid striped bass, also known as wipers. These bass are a mix between white bass and striped bass and grow quickly, reaching five to 10 pounds. The tough fish can also survive in poor water conditions and a wide range of temperatures.

During a public information session on Tuesday, Edward Enriquez, a warmwater fisheries biologist with the department, said the hybrid striped bass is functionally sterile, meaning that its sperm and eggs are malformed. Because of that, and the fact that the fish only lives five to six years, if the hybrids were to cause problems, their population could be eliminated by not stocking anymore wipers.

“The benefits far outweigh the concerns of their potential negative impacts,” Enriquez said.

Those benefits include attracting anglers to Caballo Reservoir, which is located south of Truth or Consequences and could attract anglers from metropolitan areas like Las Cruces, Albuquerque and El Paso. The hybrid species has a short lifecycle and, according to Enriquez, the impacts on native fish would likely be small.

During the meeting, Kevin Bixby with the Southwest Environmental Center expressed concerns about spending money to introduce another non-native fish into New Mexico waters.

“Knowing how many native fish species are unprotected by law and neglected by managers, it is difficult for me to support introducing yet another non native species into New Mexico,” he said at the end of the meeting using the Zoom chat function. “I wish the department would spend their resources restoring native.”

Earlier in the meeting, Eric Frey, the department’s sportfish program manager, addressed some of his concerns about spending money on non-native species introduction.

He said if there are not enough opportunities for anglers, people may illegally move fish from one body of water to another.

Caballo Lake, he said, is an underutilized fishery and the department receives complaints that it does not do enough for the reservoir.

The hybrid striped bass preys mainly upon shad, including the native gizzard shad. This fish is abundant in Caballo Reservoir.

Other native fish that could be impacted by the introduction include the smallmouth buffalo and rivercarp sucker. Enriquez said these are large fish that can grow to be 30 to 40 pounds.

“One kicked my butt on a boat,” he said.

The native blue catfish, which is also found in the Caballo area, is spiny and he said it would fight back pretty well against the hybrid striped bass.

“Wipers, or hybrid striped bass, they prefer and they target gizzard shad because, one, it’s their preferred prey base, but also because they share the same habitat areas and have the same habitat types within the lake,” Frey said.

River carpsucker and smallmouth buffalo have little habitat overlap with the hybrid striped bass, he said.

The department is hosting another public information meeting at 6:30 p.m. Tuesday, Dec. 14 via Zoom.

This story has been updated to correct the location of Caballo Reservoir.