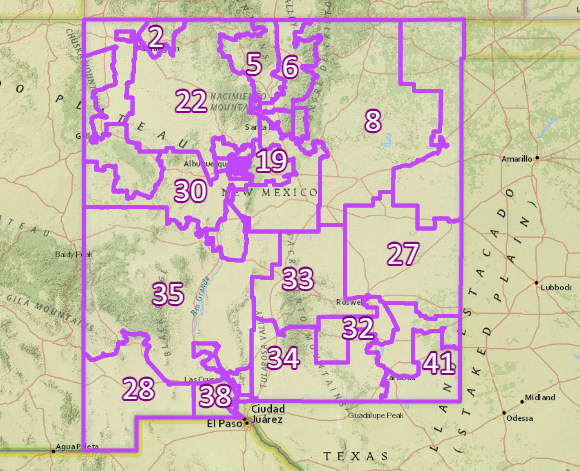 New Mexico’s latest special legislative session, mostly devoted to redistricting, came to an end on Friday after the state House approved two pieces of legislation. The state Senate adjourned the night before after approving its own new district map, a House redistricting proposal and a House bill that cleaned up language in the state’s medical malpractice law.

On the House floor on Friday, representatives approved the Senate redistricting map on a 38-22, near-party-line vote and, through a concurrence vote, approved changes the Senate made the night before on a medical malpractice bill.

Despite a traditionally unspoken agreement that each chamber does not make changes to each other’s map proposals, the House engaged in a three-hour debate over the Senate’s own map proposal.

The debate mostly centered around ethnicity and whether or not all of the map proposals presented during the two-week-long special session were consistent with a newly formed independent redistricting committee.

“I believe that the statement to this legislature and what we’ve done this year is sin vergüenza,” Montoya said. “Don’t we hold on to anything that was important to our forefathers? Is there anything that our parents taught us that is worth keeping hold of?”

The debate seemed to be a carryover from the Senate debate the night before and centered on the sentiment from Republicans in both the Senate and House that the redistricting process was tainted.

This year, for the first time, a statutorily-created Citizen Redistricting Committee came up with about a dozen different recommended map concepts for the Legislature to consider. The law does not require the Legislature to adopt any of the suggestions from the redistricting committee and Democrats defended their map proposals as being based on the committee’s recommendations, albeit not verbatim copies of the committee’s proposals.

Rep. Jane Powdrell-Culbert, R-Rio Rancho, who is now facing a major change to the district she represents, bluntly said she thought the new redistricting process “sucks.”

“There’s an obvious attempt to politically wedge people of color in this state, unfortunately, and I’m sorry to say that, but it’s obvious to me,” Lente said. “People of color are smarter than that. We should all recognize that when they start talking about minorities, in a minority-majority state, that we are not minorities.”

The proposed Senate and House maps now go to the governor’s desk for approval. Gov. Michelle Lujan announced on Friday morning that she had signed SB 1, the congressional redistricting map that was approved by both the House and Senate.

In a statement on Friday, Lujan Grisham said the congressional map proposal “established a reasonable baseline for competitive federal elections, in which no one party or candidate may claim any undue advantage.”

“We must honor the ideals of American democracy by doing everything we can to ensure a level playing field, reflecting what is unique about New Mexico, on which these good faith interests may compete for political representation.”

Besides redrawing the state’s congressional, state House and Senate districts, Luan Grisham tasked the legislature with appropriating the remaining American Rescue Plan Act (ARPA) funds after the state supreme court ruled spending it was not Lujan Grisham’s authority. Lujan Grisham can either approve that legislation, issue partial vetoes or veto the bill completely.