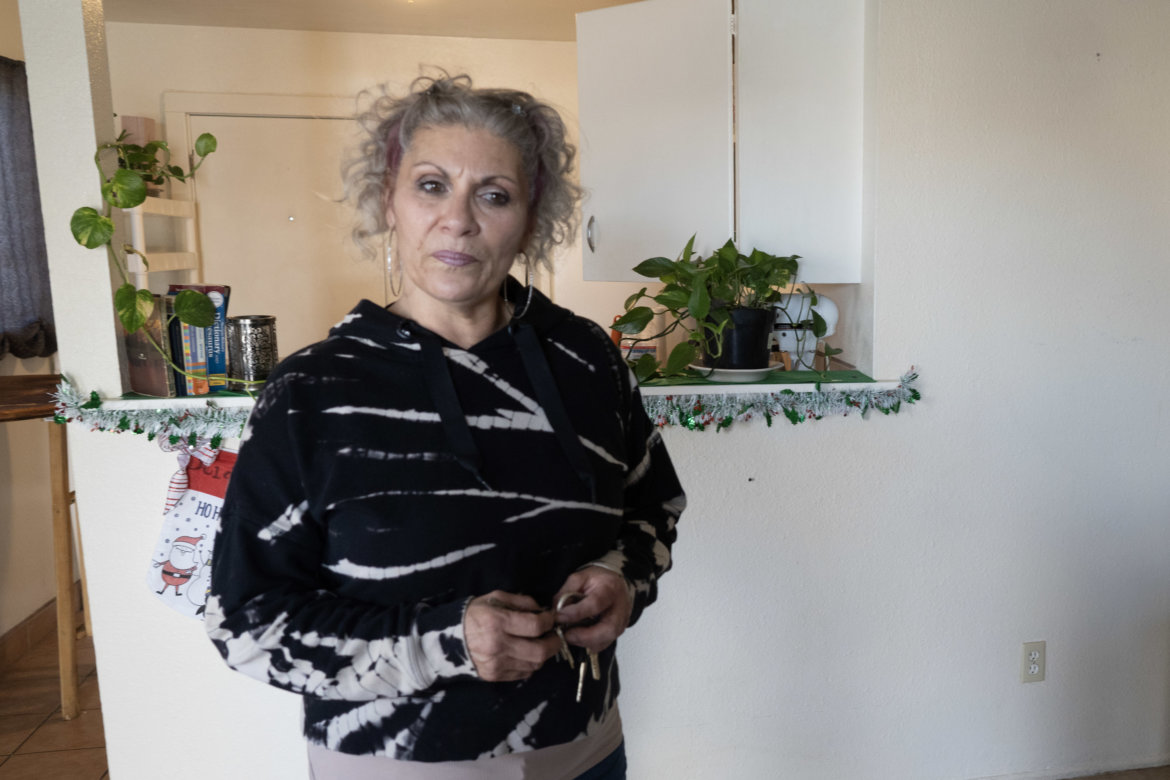 Deidra Alldredge in her current rental home in Albuquerque. After her lease was not renewed last spring from her one-bedroom apartment in northeast Albuquerque, Alldredge bounced between extended stay hotels, until she eventually found a place to live here, in Albuquerque’s International District — where she says she’s surrounded by crime and drugs.

In early 2021, Albuquerque’s medical clinics were so overwhelmed by the pandemic that Deidra Alldredge couldn’t book a doctor’s appointment to renew a prescription for insulin. Her diabetes got worse. She grew dizzy and nauseous, and could barely see or think straight. Unable to clock in at her job as a telephone customer service agent for a bank, the 54-year-old woman was fired in February.

Without an income, she fell behind on rent. When April 1 rolled around, she didn’t have the $695 for her one-bedroom apartment in northeast Albuquerque. A few days later, she found a notice taped to her door: If she didn’t pay her rent in three days, her landlord would evict her.

“My life was slipping out of control, and I didn’t know how to make it stop,” Alldredge said.

She sought help, researching online and calling friends and fellow churchgoers, and decided to apply for the state’s COVID-19 rental-assistance program. It was part of a $25 billion national initiative, with $200 million allocated to New Mexico, to help tenants make their rent and prevent them from getting evicted. Applications opened April 5, and Alldredge submitted hers the next day.

But less than two weeks after she applied, her landlord tried to evict her anyway.

According to a Searchlight New Mexico analysis of rental-assistance data and court records, landlords sought to evict at least 191 tenants while they were in the process of applying for assistance between April and November of this year.

“It’s just so frustrating to think about how easily avoidable this was,” said Serge Martinez, a University of New Mexico law professor who specializes in housing. “In a case where [someone] applied for the money, it’s on its way, we know the state has it, and we’re just waiting for a determination — to then file a lawsuit. … I was just swearing in frustration as I think about it.”

Searchlight spoke with more than a dozen tenants whose landlords tried to evict them while their rental-assistance applications were pending. Some tenants were grateful for the financial aid, even when it came late, because it resolved the outstanding debt. Others were frustrated that it took so long to get the funds.

Alldredge’s landlord, Casa del Verde Apartments, had a relatively easy time getting her out of her apartment. At first, they attempted to evict her for nonpayment. In the end, they simply chose not to renew her lease — set to expire at the end of May, according to court records.

The apartment manager, who filed the complaint for the landlord, declined to comment and referred Searchlight to The Neiders Company, a real estate investment firm that lists Casa del Verde as a property on its website. The company did not respond to multiple requests for comment.

For more than a month, she bounced between extended stay hotels until she found a place to live in the heart of Albuquerque’s International District. She said she’s surrounded by crime and drugs.

“I can’t rent anything else,” she said. “The damage it’s done to me is still ongoing. That record will be there forever.”

Most of the 191 tenants identified by Searchlight were, like Alldredge, never actually evicted by court order; 131 of the cases were instead dismissed, with judgments against the tenant issued in 53. In most of those cases, the tenants were not forcibly removed, even if they received a court order to move out. State and federal protections enacted during the pandemic curtail the ability of courts and law enforcement to physically eject tenants for failing to pay rent.

Still, the mere presence of an eviction filing can make it difficult for tenants to find housing in the future, according to housing advocates and attorneys — and there’s currently no way of expunging or sealing eviction records in New Mexico.

Most tenants did well by the state’s rental-assistance program, which is overseen by the Department of Finance and Administration. According to Donnie Quintana, the program director, it allowed more than 20,500 households to pay back rent and avoid eviction.

“While DFA does not have the authority to stop evictions in New Mexico, we continue to work with legal experts in eviction to help as many New Mexicans facing evictions as possible,” Quintana said by email.

DFA’s program covers all of New Mexico except Dona Ana County and the areas of Bernalillo County outside Albuquerque, both of which have their own rental-assistance programs. Searchlight’s analysis only includes DFA data.

“Making that connection between the landlords who are actually receiving [rental assistance] and what happens in terms of evictions in those buildings afterwards — that hasn’t been done yet,” said Peter Hepburn, a researcher at Princeton University’s Eviction Lab, which has been studying evictions nationwide since 2018.

Between April 1 and Oct. 31, New Mexico issued about 12,200 rental-assistance payments in addition to awards for utilities and other expenses, according to the data. By the end of November, it had distributed nearly $72 million. The counties of Bernalillo and Dona Ana sent out an additional $7.6 million.

Hepburn said that performance reflects positively on the effectiveness of New Mexico’s program. “If a very small fraction of landlords are pursuing eviction cases simultaneously, maybe that’s a good sign,” he said.

Maria Griego, director of the Economic Equity Team at the New Mexico Center on Law and Poverty, agreed. “They are working hard to get this money out, and it’s getting out,” she said. “But we do need more safeguards in place to ensure that not only is the rent being paid, but that tenants are being protected and that these hiccups don’t lead to an eviction on their record that shouldn’t be there.”

That hiccup happened to Julissa Bustillos, 31, who lives with her 10-year-old son in Marbella Apartments in northwest Albuquerque. Bustillos works as an office assistant and pre-K program supervisor at a daycare, and her workplace frequently closed due to COVID-19 exposures. This cut her monthly income almost in half, she said.

When Bustillos applied for rental assistance in the middle of July, she said she informed her landlord. On Aug. 23, the landlord went to court to try to evict her.

“I don’t have a criminal background or anything. I was just nervous about the court and stressed,” she said. “I did everything I could, and he still filed.”

An office assistant who answered the phone at Marbella referred Searchlight to a regional manager who did not respond.

Bustillos was lucky. Even when landlords receive past due rent, they are not required to drop a case, attorneys told Searchlight.

“The landlord is under no obligation to stop the eviction even if you pay the rent,” Martinez said.

Two New Mexico state legislators plan to introduce a bill in the 2022 session that would change that dynamic. Under the proposal, if the tenant pays off their rent within three weeks of the judge’s order, the case would be dismissed. A bill with that provision was introduced in the last regular legislative session. It died in committee.

Are you a tenant struggling to make rent?

You can apply for rental assistance here. People who unsuccessfully applied before may apply again, advocates say.

During the pandemic, many people lost secure housing. If you are homeless, call or text these numbers to get help. They will connect you to a hotline run by the New Mexico Coalition to End Homelessness:

In the rest of the state: