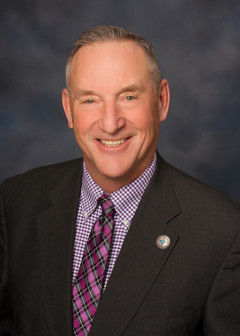 New Mexico is in an ideal location for research into dryland resiliency, including best irrigation methods and drought-tolerant crop varieties, according to state Sen. William Soules, D-Las Cruces, who has sponsored legislation to fund a dryland resiliency center.

The legislative session starts Tuesday and the funding for the dryland resiliency center is among the legislation pre-filed before the first day.

This research center would be based out of New Mexico State University but would also work collaboratively with other higher education institutions in the state including Eastern New Mexico University, the New Mexico Institute of Mining and Technology and the University of New Mexico.

“This isn’t just to bring it into Las Cruces, where I live,” he said, explaining that the lead researchers are at NMSU and that is why it would be housed there.

Soules has asked for approximately $15 million to fund this program. The bill states that this funding would be used “to develop and build a technologically advanced statewide ecological monitoring network, develop computer modeling and artificial intelligence solutions to diagnose and predict vulnerabilities in dryland natural capital, biodiversity and social-ecological-agricultural systems and develop resilience strategies for the sustainable management of drylands.”

The money can’t all be spent in one year. If passed, the legislation would cap the amount spent in a single fiscal year to approximately $3 million.

The idea for the dryland resiliency center was initially presented as a project proposal to the New Mexico Established Program to Stimulate Competitive Research, or EPSCoR, for funding through the National Science Foundation. Brittney Van Der Werff, a spokesperson for NM EPSCoR, confirmed that it was one of the three project proposals for the five-year funding award. However, it was not the one ultimately accepted.

Soules described the three proposals as “wonderful” projects during a phone interview with NM Political Report on Wednesday.

“All three projects were amazing,” he said.

Van Der Werff said the planning process for the proposals started in 2020 and, after the projects were submitted, they were sent to an independent external evaluator before being presented to EPSCoR’s state committee. Soules sits on the committee as the state Senate representative.

Funding from the National Science Foundation this year went to a project led by the University of New Mexico and is focused on engaging communities in the Intermountain West to address the impacts of climate change.

Soules is now bringing the other two projects to the Legislature for possible state funding. In addition to the Dryland Resiliency Center, this would include a quantum materials and technology program. Soules said he is also seeking $15 million in funding for that project.

Looking at past EPSCoR projects, Soules said these projects would likely see a significant return on investment while also providing opportunities for university faculty and graduate students.

In 2018, EPSCoR selected the New Mexico SMART Grid Center as its five-year program for funding through the National Science Foundation. Much of the research focuses around what is known as a distribution feeder microgrid. These can be isolated from the main grid and provide power into the grid. This allows a portion of a city to operate when needed without power supplied by the main electric grid.

Soules said if the center gets established he hopes it can become an international leader in research.

“It has huge potential for the state,” he said.