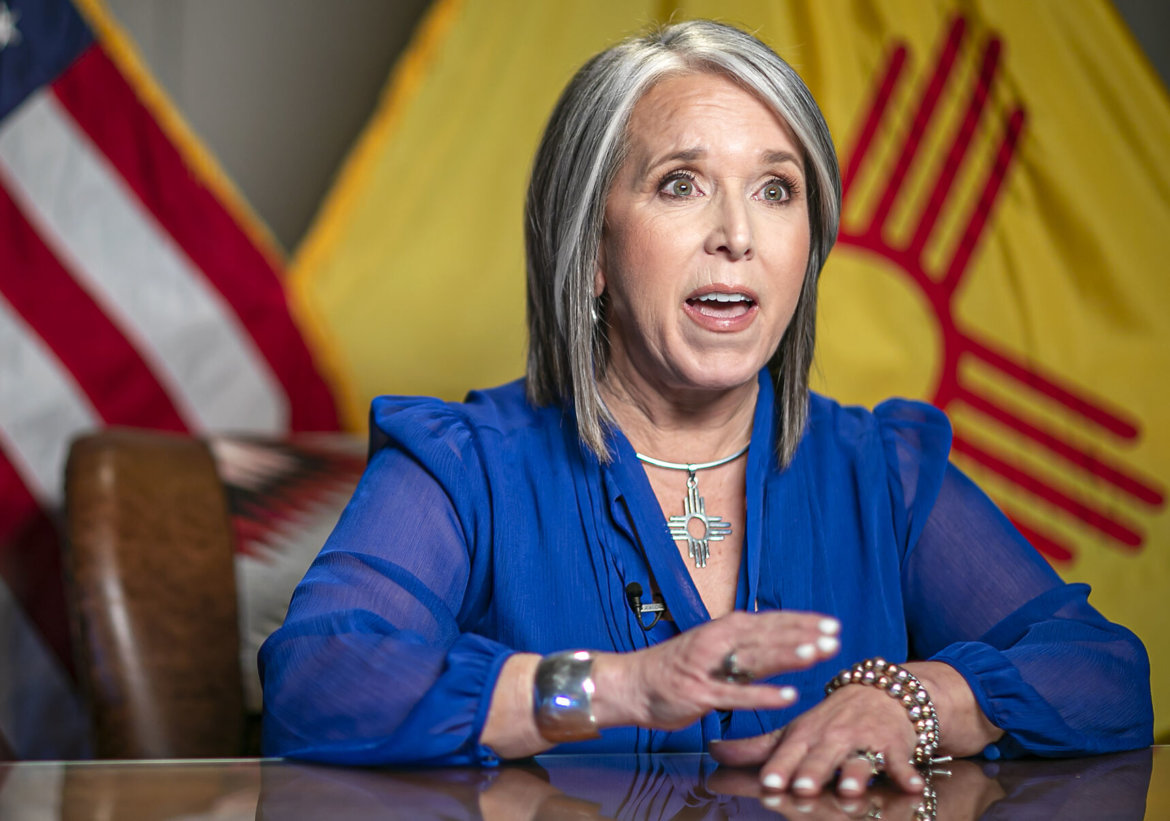 Gov. Michelle Lujan Grisham delivers the State of the State address Tuesday during the first day of the 2022 legislative session.

Saying the state has “unimaginable financial resources” at its disposal, Gov. Michelle Lujan Grisham challenged lawmakers Tuesday to think big and be aggressive on New Mexicans’ behalf during the 30-day legislative session.

“Dating back decades, a timid mindset has afflicted people in this Capitol building, a pessimism that can be self-fulfilling,” the governor said during a live-streamed State of the State address she delivered from her office amid the ongoing threat of COVID-19.

“Thinking small is a curse. Big and meaningful changes are possible, but the biggest change may be our attitude, our perspective,” she said. “At a moment in time when we have the money to do it all, let’s not limit ourselves; let’s not be unnecessarily incremental. Can’t New Mexico be a state — can’t we be the state — where everything is possible?”

New Mexico is projecting more than $1 billion in new revenue, attributed in large part to the oil and gas industry, which will allow the state to increase spending on new initiatives lawmakers have described as transformative.

After the nearly 25-minute speech, which lacked the normal pomp and circumstance that usually accompanies the annual occasion, Sen. Gay Kernan, R-Hobbs, said the governor pitched several ideas she considered “generational” in change.

“We’ve got great promise in this state, along with great revenues, and I just want to stand here today, representing the oil and gas industry in my particular region, to say thank you to that industry for providing the resources that will allow many of the things that we can consider during this session,” Kernan said. “I want to recognize what they are contributing to this state, and I hope everybody on this floor will remember that every time we vote to produce a new program or to fund a new program.”

The governor, wearing a blue dress and her signature Zia necklace, also urged lawmakers to reduce taxes, including on Social Security income, and increase teacher pay by 7 percent.

“They deserve it, and we can afford it, and it’s the right thing to do,” said Lujan Grisham, who also called for raising the starting salaries for every tier of educators.

The governor touted her administration’s accomplishments, from raising the minimum wage for the first time in a decade to guaranteeing paid sick leave, but said New Mexico would need to tackle crime to “keep up our economic momentum,” including bail reform.

“We need tougher penalties for the worst of the worst, the repeat offenders and those who have proven themselves to be a danger to our communities,” she said. “We are going to pass a law, this session, that will keep violent criminals behind bars until justice can be done. We will put a wedge in the revolving door of violent crime in New Mexico. The safety of our communities cannot be up for debate.”

Lujan Grisham asked the Legislature to support a proposed 19 percent budget increase for the Department of Public Safety “to fund innovative new crime-fighting strategies and hundreds of new positions.” The governor is also requesting $100 million for the hiring and retention of police officers across the state.

Lujan Grisham said the state is on “the precipice of momentous positive change.”

“We have, right now, unimaginable financial resources at our disposal,” she said. “What we do here now, what we do in the coming weeks, will set the stage.”

At the beginning of her speech, Lujan Grisham also urged Democratic and Republican lawmakers to work together.

“I know there is a temptation to view today as the opening kickoff of a big game, or the launch of some great battle,” she said. “But I encourage you to do what you can to resist the perception of a competition, to avoid feeding a plot line that would pit one team against another. This isn’t the sports page. We’re all here to do the people’s business. It’s a sacred thing. And we’re all on the same team today — and in fact every day.”