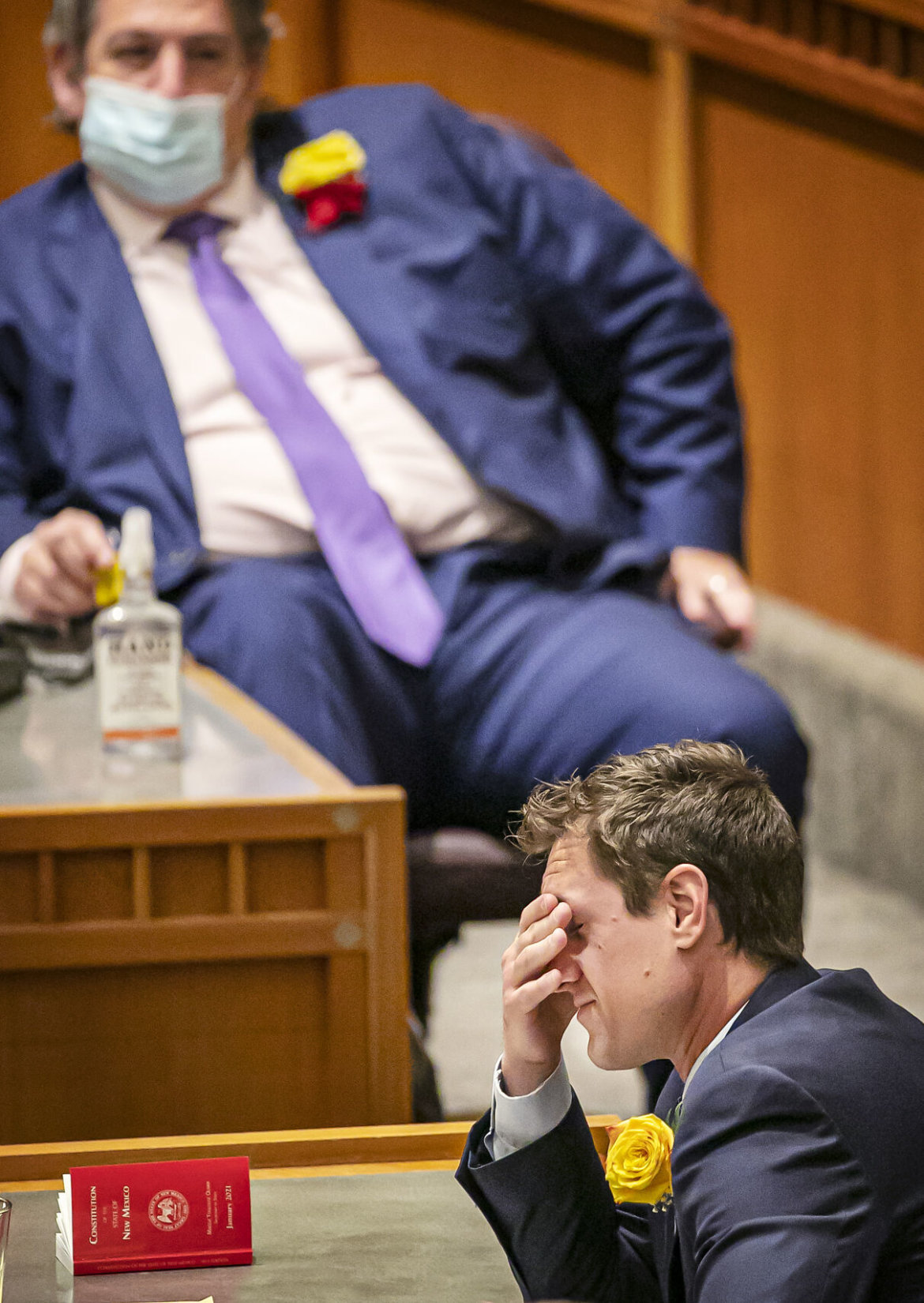 Republican Senators Gregg Schmedes refused to wear a mask in protest of mask mandates Tuesday during the first day of the 2022 legislative session at the Roundhouse.

There were sure signs a sense of normalcy had returned to the state Capitol: Protests and demonstrations.

As the 2022 legislative session got underway Tuesday in a Roundhouse open to visitors who provided proof of full vaccination against COVID-19 — including a booster — activists gathered both inside and outside the downtown building, carrying signs and rallying for their causes.

The New Mexico Freedom Alliance staged a morning protest of the vaccination mandate.

A woman held a sign that said, “Proof of Vaccination is Anti-American.” The government should not require anyone to get the shots, she said. “If you cannot decide what to put in your body, you cannot control anything,” she added, identifying herself only as Suzie.

Some people tried to enter the Capitol without vaccine proof, but few protested when front-door personnel turned them away.

Critics of Gov. Michelle Lujan Grisham’s controversial plan to make New Mexico a hub for so-called “clean” hydrogen production arrived to disrupt her State of the State address in a sneak attack.

A man carrying a bag of helium-filled balloons told passersby he was looking to surprise his wife on their anniversary; instead, he rushed into the media room overlooking the House of Representatives and unleashed the balloons over the chamber while shouting that hydrogen is “a false solution.”

People sitting in the House gallery began chanting in support of his actions and were led out by security guards.

New Mexico State Police officers and Capitol security handcuffed the man and escorted him off the property. They served him with a notice of trespass, which means he will not be allowed back at the Capitol without being arrested, Officer Dusty Francisco, a state police spokesman, wrote in an email.

Later in the day, the youth-led activist group YUCCA — Youth United for Climate Crisis Action — took responsibility for the disruption in a Twitter post.

The governor’s hydrogen hub plan calls for creating an industry to separate what’s known as “blue hydrogen” from natural gas. Carbon dioxide would be captured during the process and stored underground. The hydrogen would be used to power electric plants, heat homes and fuel transportation.

But the use of natural gas in the process has drawn criticism from environmental groups that see the initiative as increasing, not decreasing, fossil fuel production in the state.

Other demonstrations were more somber.

Albuquerque artist Ryan Saavedra stood near the Capitol along Old Santa Fe Trail in front of a mural portraying his son, Ryan Saavedra Jr.,who was shot dead in April in Albuquerque.

Saavedra helped start the advocacy group New Mexico Crusaders for Justice to draw attention to the rising homicide rate in Albuquerque. He said he supports legislative efforts to impose stricter penalties for violent crimes and make it harder for violent felons to be released from custody while awaiting trial.

“Some people are afraid it’s going to fill up the jails,” he said of a bill that would put the burden of proof on a defendant seeking pretrial release. “I say, they should build more jails.”

Other activists spoke out against Lujan Grisham’s proposal to put $100 million into hiring more police officers in the state to address a rising crime problem. “More police is not the answer,” said Szu-Han Ho, one of several activists demonstrating with a group called People’s Budget New Mexico.

Tim Mosely staged a one-man — or rather, one-dinosaur — protest against the public health mandates put in place during the COVID-19 pandemic. Dressed in a Tyrannosaurus costume and carrying a sign reading, “M.L.G.  ‘Rex’ Us,” Mosley said, “I’m tired of having things taken from my family.”

He said the state’s public heath rules forced his wife, a teacher, to get a vaccine; sent his daughter, who has emotional challenges, home from school; and led to a temporary shutdown in the film industry, where he works.

“I want my family left alone,” he said. “I’m tired of the government interfering in my life.”

Not all the protests were held outside legislative chambers.

Senate Republicans objected to a motion to adopt rules for the chamber, including requiring face masks and following proper social distancing, before the proposed procedures were first vetted by the Senate Rules Committee. The motion required a two-thirds majority vote, or 28 in the affirmative, to pass because it hadn’t been considered in a committee. It failed on a party-line 26-15 vote.

In explaining his vote, Sen. Gregg Schmedes, R-Tijeras, said he didn’t believe there was a “scientific basis” for the proposed rules, specifically the wearing of face masks.

“As an individual, as a surgical airway specialist, I have to do my job and maintain the integrity of my profession … and upon a critical review of the data we have for the way we’re using widespread mask use during this outbreak, I have not seen that masks decrease transmission of the spread of COVID the way we’re using them,” he said.

Schmedes and at least two other Republicans, Cliff Pirtle of Roswell and David Gallegos of Eunice, did not wear face masks during the floor session.

Their decision to forgo face masks prompted the progressive advocacy group ProgressNow New Mexico to use the hashtag, #GOPDeathCult, on Twitter.

“Here we are 59 minutes into the session, and there’s already tweets going out from the other side attacking this caucus and calling it the death cult,” he said. “I guess this session is starting like the last session … with a lack of respect from the majority to the minority party, so if you want to work together, stop being a teenage girl on Twitter.”