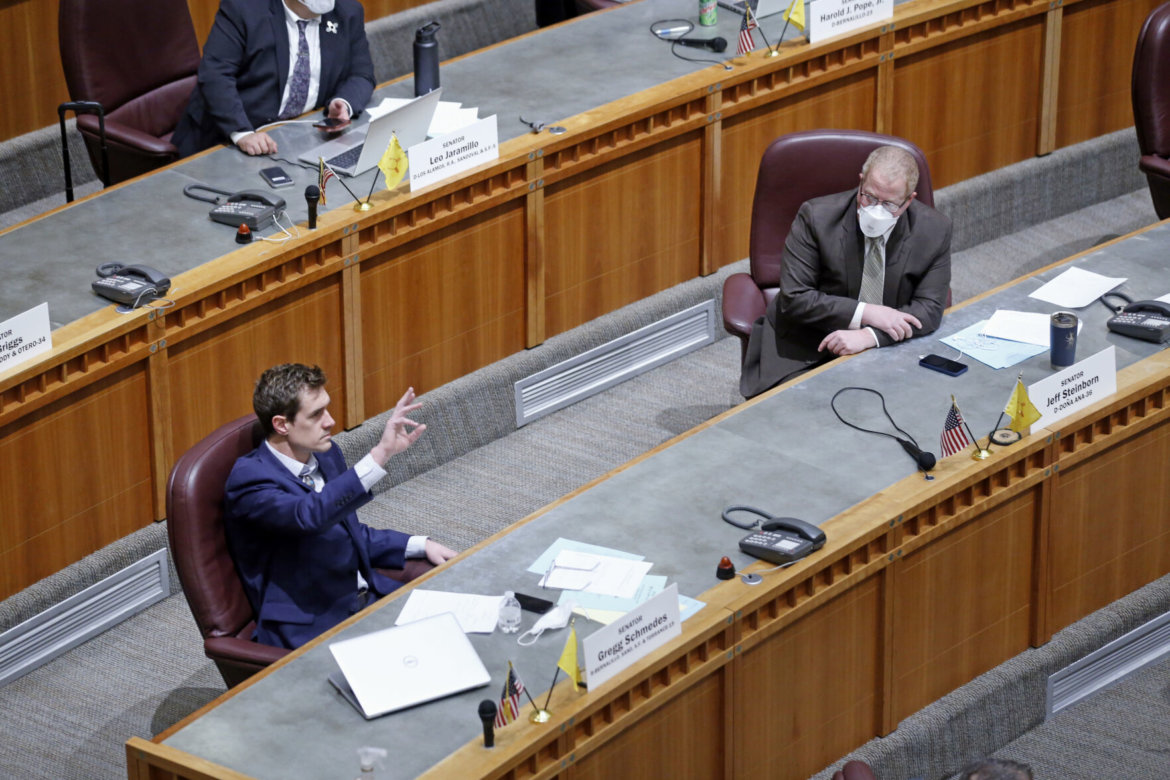 Sen. Gregg Schmedes, R-Tijeras, left, asks to speak on the Senate floor after Sen. Jeff Steinborn, D-Las Cruces, right, said wearing a mask was a ‘basic courtesy.' Schmedes said he believes masks are a 'net harm' and doesn't view them as a 'neutral courtesy.'

Lawmakers gathered in Santa Fe for a 30-day legislative session meant to deal with budget and tax issues are supposed to be fighting on New Mexicans’ behalf.

But on the second day of the session Wednesday, members of the state Senate continued to fight over face masks.

The Senate eventually voted 32-7 to adopt rules for the chamber, including a face mask requirement, but not before a back-and-forth on the floor.

Sen. Jeff Steinborn, D-Las Cruces, kicked off the debate, saying he wanted to speak to his colleagues from the heart.

“I’m just so disappointed that this rule is even needed,” Steinborn said, referring to a face mask requirement. “This is about basic courtesy, basic respect for everyone around you, for their families, for our hospital workers. We have people who have life-threatening [medical conditions] not related to COVID who can’t get a [hospital] bed. … It is a matter of courtesy to wear a mask.”

Under the Senate’s seating assignments, Steinborn sits next to Sen. Gregg Schmedes, R-Tijeras, a surgeon who has gone maskless since the start of the session.

“I really hope this is my last time to talk about masks this session,” Schmedes said. “I’m kind of getting tired of it.”

On Tuesday, Senate Republicans voted against adopting rules for the chamber, including COVID-19-safe protocols, since they hadn’t been vetted in a committee. Tuesday’s motion required a two-thirds majority vote to pass, and it failed by just two votes.

Schmedes told his colleagues that day he believes there is no “scientific basis” for wearing masks to prevent the spread of the coronavirus and that he has “not seen that masks decrease transmission of the spread of COVID the way we’re using them.”

Schmedes said Wednesday he believes masks are a “net harm” and doesn’t view them as a “neutral courtesy.” He also cited a study he said found “no evidence” that face coverings and other actions were “associated with lower odds of COVID-19.” He also said reports of speech delays in the United States have “exploded” since mask mandates have been in effect.

His comments drew a sharp rebuke from another doctor in the chamber: Sen. Martin Hickey, D-Albuquerque, who is retired.

“I would dispute my fellow physician and ask him to think if he is looking at studies in a tangential way, studies that are based on fact,” he said.

“Wearing a mask reduces the transmission substantially and in many cases, as we’re seeing now, saves lives,” Hickey added.

Schmedes donned a mask after the Senate adopted its rules.

Though face masks will be required under the Senate’s rules, senators will have the option to go maskless if they participate remotely.

“Senators have a choice if they don’t want to mask when they’re on the floor or in committee … because they can always participate from their office,” Sen. Daniel Ivey-Soto, D-Albuquerque, said during a Senate Rules Committee meeting earlier in the day.

Senators will be allowed to participate in floor sessions and committee meetings from outside the Capitol if they’re in isolation or quarantine as a result of COVID-19 or are at “high risk for mortality” from the virus.

Sen. Mark Moores, R-Albuquerque, told Democrats during the morning meeting that vetting the rules in a committee proved beneficial.

“By working together, we made this better,” Moores said. “When you guys work with us, we can make things better and you can actually get our votes instead of just trying to do what you’ve been doing lately.”