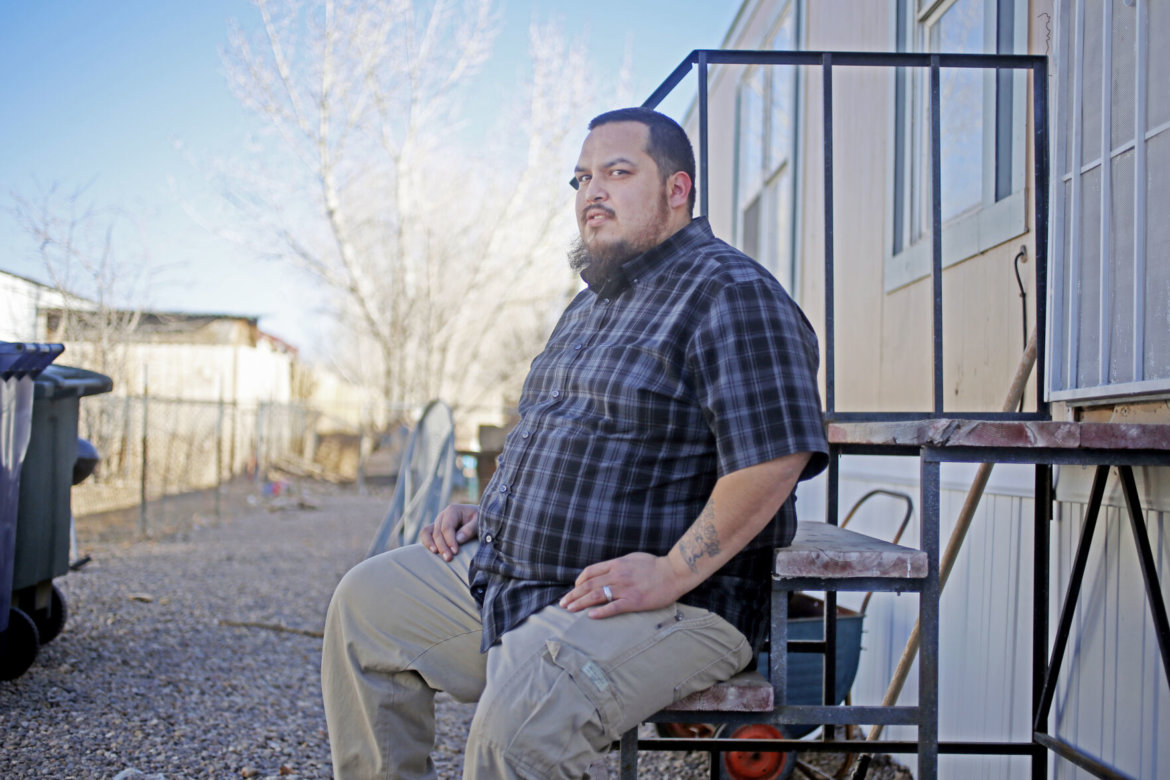 Joshua Acuña works full time as an educational assistant in Santa Fe Public Schools. He's working toward getting a teaching degree, but he says his low pay is a major barrier.

Joshua Acuña sees his chosen profession — education — as a calling.

He says he’s not in it for the economic reward, but the 30-year-old is making less than $20,000 as a full-time educational assistant at Santa Fe Public Schools, even after more than a decade in the field.

Acuña went through Santa Fe Public Schools himself and has high hopes of becoming a teacher.

But as he tries to earn his bachelor’s degree in education at New Mexico Highlands University while attempting to sidestep debt, one thing keeps getting in the way.

Money — specifically, the lack of it.

Acuña says he is heartened by legislation proposing to raise the salaries of teachers in the state’s three-tier licensure system by $10,000. If passed by the Legislature and signed by Gov. Michelle Lujan Grisham, starting teachers would earn a minimum of $50,000 annually, with middle-tier teachers moving to $60,000 and the top tier at $70,000.

In addition, Lujan Grisham wants to give 7 percent pay raises to all public school employees.

But will that help make a difference in a troublesome and widening teacher shortage?

Educators, lawmakers and those leading teacher training programs say yes — in the short run. But they also say it is only a start, adding raises need to be continual. Even, then, they acknowledge there is still no guarantee New Mexico can stem its capsizing retention numbers among the people who head its classrooms.

“This is one of the most important initiatives moving through New Mexico,” Mary Earick, dean of the School of Education at New Mexico Highlands, said of the raise proposal. “For the first time in New Mexico, a teacher in the midrange will make a living wage. This is critically important for the recruitment of educators.”

Mary Parr-Sanchez, president of National Education Association New Mexico, said the tier increases will make New Mexico teacher salaries more competitive with surrounding states such as Texas and Colorado, where the average teacher salary is about $3,000 more than it is here.

That’s particularly important in school districts that border those states, where educators can easily commute across state lines to make more money.

Parr-Sanchez said she believes the state has to continue to raise salaries for teachers and all public school employees every year “given the landscape and the fact that yesterday [Wednesday] the governor had to deploy the National Guard to schools because we are in a crisis.”

Lawmakers who once worked as educators also say continual pay raises will be key to keeping teachers happy and employed.

“They [the raises] have to be recurring, and they have to come from recurring funds,” said Rep. Christine Trujillo, D-Albuquerque, who taught in that city’s school system for 24 years.

For his part, Acuña says the raises will help support his two children, ages 8 and 10. His wife works full time while he does odd jobs to cover costs when he’s not in a kindergarten classroom at Atalaya Elementary School.

The pay was so marginal that for a time Acuña says he left the classroom to manage a gas station in town. But the classroom and his desire to become a teacher called him back.

“I wasn’t having a passion for that,” he said, referring to the gas station. “I missed working with students, so I ended up leaving that, coming back and working for pennies again.”

Citing recent increases in minimum wage rates across the country and the state, he said “you don’t even have to have a high school diploma to make more than teachers make.”

While there are many reasons teachers leave the profession or retire early — including hard-to-understand teacher evaluation systems and mental, emotional and physical health problems associated with the demands of the job — Trujillo said she thinks more money can make a difference.

The raises, Trujillo said, may make some candidates say, “Maybe this is a job I want to think about again.”

Long before COVID-19 arrived in New Mexico and transformed public education, the state faced a teacher shortage. But national studies and reports make it clear the coronavirus pandemic has only exacerbated the problem.

A Rand Corp. survey of teachers at the start of the 2020 school year reported one-fourth planned to leave the profession by the end of that school year. Before the pandemic, that figure was 1 in 6 teachers, the report said.

Still, some students seem eager to become teachers, Earick said, and Highlands has seen an increase in the number of candidates entering its teacher training programs — 28 percent more last year and another 1 percent this year.

She said she’s particularly excited about the fact that 22 percent of the college’s students entering the early childhood education field are Native American.

“We are working really hard to support teacher candidates who reflect the students they are teaching,” she said.

But other educator programs around the state are not faring as well. A recent New Mexico State University report on teacher shortages said 2021 brought 50 fewer graduates of teacher education programs than 2020. Practically half of those educators went through an alternative licensure process, that report said.

Hansel Burley, the dean for the University of New Mexico’s College of Education and Human Science, said that’s bad news that falls in line with national trends.

“Participation has gone down,” he said of the enrollment levels in his own teacher programs. “There are pockets around the country where you do see some increases in enrollment, but generally it’s down.”

Burley pointed to a variety of factors, some driven by student debt or challenging entry requirements to get into some programs. Other factors — a lack of respect for the profession and lingering bitterness from the era of strict standardized testing — also play roles, he said.

He’s also seen a rise in educators who arrive at schools through alternative licensure pathways. Those alternative routes are often associated with shorter tenure and poor instruction, he said.

In 2020 the Learning Policy Institute reported the majority of starting teachers in Northern New Mexico who either completed or were working through an alternative licensure program felt “woefully unprepared” for the “complex work” of leading classrooms.

Burley contends pay is a factor, but far from the only issue.

“We’ve made it a very difficult profession,” he said of teaching. “In the last 20 years or so, we’ve legislated ourselves into a pickle.”

Burley called the governor’s wage proposal a “beautiful thing” that could  gradually bridge that vacancy gap. But he cautioned even if the raises become a reality, there will still be a short-term shortage.

“There’s no way we can fill that gap in a few months,” he said.

Rep. G. Andrés Romero, D-Albuquerque, a civics and history teacher, said lawmakers have to look at the reasons for teacher shortages and find other resources, besides pay raises, to address the problem.

He, too, thinks the state has to find ways to keep increasing teacher pay beyond just one year. The public, he said, should continue to pressure the governor and legislators on this issue.

Other measures can be taken, said Rep. Debra M. Sariñana, D-Albuquerque, who has introduced legislation to create a teacher residency program. The initiative, House Bill 13, would appropriate $20 million to ensure first-time teachers get to work side by side with veteran teachers for that first year.

“That new teacher would get to see everything in the classroom,” she said. “How to manage a class, how to deal with kids … testing.”

The pay raises will make a difference, but “I think what will make the biggest difference for those who come in is the way they are trained,” said Sariñana, who retired last summer after 20 years of teaching in the public schools.

For Joshua Acuña, the proposed pay hikes are “long overdue.”

For now, he spends his time helping lead lessons for his kindergarten class and racking up student teaching hours for his degree. This month, he’s teaching kindergartners about rhyming words and single-digit numbers. His favorite moments at work are not unlike legions of other teachers: He says he’s overjoyed when “the light in their head pops on” and once-confused students understand a concept.

To capture more of those moments, Acuña wants to earn a master’s degree in special education and stay in the classroom, probably as an elementary school special-education teacher.

And yet despite all that — the sacrifices he’s already made, his love of the classroom —  Acuna admits he has entertained a thought that concerns those who worry about the future of public education in New Mexico.

“If I didn’t have the passion and I wasn’t going for my degree, I probably wouldn’t be in education,” he said. “But since I’m so close, I’m sticking with it.”