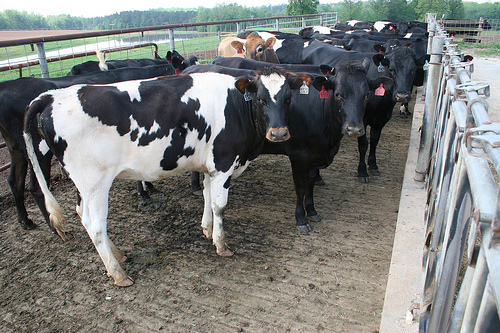 Looking at the cows at Highland Dairy, U.S. Rep. Teresa Leger Fernandez said there’s no visible sign that anything is wrong with them.

That’s part of what she called the “insidious nature” of PFAS chemicals, which have been linked to cancers and low-birth weights.

Leger Fernandez visited the eastern New Mexico dairy this week for the first time, although she has been advocating to get the dairy owner compensation for the cattle following contamination from a nearby U.S. Air Force base.

While the cattle at the dairy look like any other cows, Leger Fernandez said tests done at the dairy have yielded results far exceeding the federal standard of 70 parts per trillion. That means the cows can’t be used for food production.

In December, a rule changed to allow the U.S. Department of Agriculture to buy cows from dairies like Highland Dairy where training exercises at military bases led to PFAS contamination.

The contamination came from fire suppression foam used in training exercises at Cannon Air Force Base. The forever chemicals then entered the groundwater that the dairy relies on. This groundwater is part of the Ogallala Aquifer, which is quickly being depleted. Leger Fernandez said, like all water in New Mexico, the Ogallala Aquifer is a precious resource.

“It is heartbreaking to know that we have contamination in this very important aquifer,” she said.

The New Mexico Environment Department is investigating the contamination and working to determine the size of the plumes as well as its impacts on both water supplies and wildlife. This investigation is expected to be completed this year.

Leger Fernandez’s visit to the dairy came as she toured her district to tout the funding secured through a bipartisan infrastructure bill that was signed into law in November. That includes $1 billion for the U.S. Bureau of Reclamation to spend on authorized rural water projects. One of those eligible projects is the Eastern New Mexico Rural Water System, a pipeline that would take water from Ute Lake, a reservoir on the Canadian River, to communities like Clovis that rely on the Ogallala Aquifer for municipal supplies. While it is not yet clear how much money will be available for each project, details are expected to be released in the upcoming weeks.

Leger Fernandez also led a bipartisan letter during the Fiscal Year 2022 appropriations submission process requesting $125 million for the Bureau’s rural water program, which includes the Eastern New Mexico Rural Water System. This resulted in $7.79 million being included in the Energy and Water appropriations bill that passed the U.S. House of Representatives. Negotiations between the House and the Senate will ultimately determine how much funding the project receives, according to information from Leger Fernandez’s office.