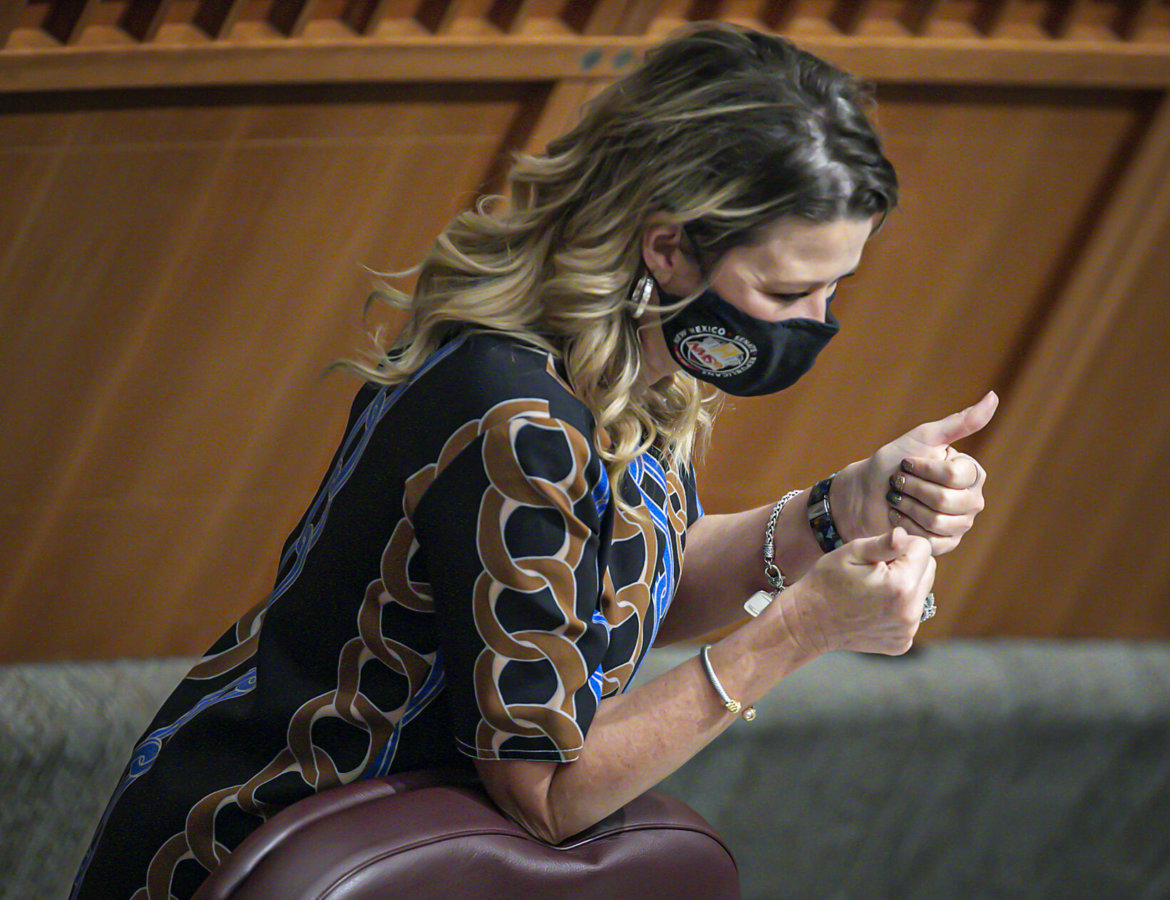 Sen. Crystal Diamond, R-Elephant Butte, gives aides a thumbs-up Friday as the Senate session draws to a close at the Roundhouse. Diamond called the governor's legislative agenda this year reactive and politically calculated.

Gov. Michelle Lujan Grisham is off to a tough start two weeks into the 30-day legislative session.

Her signature piece of legislation — a bill to turn New Mexico into a hub of hydrogen production — stalled in a House committee Thursday after a six-hour virtual hearing that drew hundreds of people, the majority in opposition.

Lujan Grisham, who is running for reelection this year, also is encountering resistance in her push to cut taxes.

A bill the governor is supporting to reduce the state’s gross receipts tax rate has sparked concerns about the financial impact on local governments, which rely heavily on sales taxes to fund their operations. The measure will be considered in the context of other tax bills that have been introduced during the session.

Her efforts at bail reform, part of a larger push to fight crime, also have run into turbulence.

On Friday, a bill that would change the way courts determine whether defendants in violent crimes will remain detained while they await trial, one of the governor’s priority pieces of legislation, cleared a House committee. But not all Democrats were on board.

During a Senate committee hearing later in the day, Sen. Joseph Cervantes, D-Las Cruces, noted the slow pace of House-driven crime bills supported by the governor.

“That so-called crime package seems to be getting very little traction, very little support for a lot of reasons,” he said.

The governor, who traveled to the nation’s Capitol on Thursday to attend a meeting of the National Governors Association, was unavailable for comment.

“I think the governor is having a rough start,” said Rep. Christine Chandler, a Los Alamos Democrat. “But certainly, as she works through some of the issues with us, I’m expecting that some, if not all, of her agenda gets through both bodies.”

For example, Chandler said there is “plenty of opportunity” to resurrect the hydrogen hub bill, which would offer tax incentives for development of infrastructure to separate hydrogen — a potential energy source — from natural gas. The governor aims to make New Mexico a leader in the burgeoning industry with help from federal funding.

“I think the sponsors have learned some things from that hearing,” Chandler said of Thursday’s lengthy debate before the House Energy, Environment and Natural Resources Committee. Two Democrats and four Republicans voted to table the hydrogen measure, preventing it from moving forward.

“I’m hopeful and expecting that we’ll be able to come up with a plan for hydrogen that addresses some of the environmental concerns that have been raised, as well as advance a technology that many of us think could be very helpful to us in the future as we move toward a carbon-free world,” Chandler said.

‘She had to embrace Republican ideas’

Republicans have described the governor’s legislative agenda as pandering for votes in a reelection year with proposed tax cuts and a tough-on-crime agenda.

“The governor’s attempt to pivot to the middle during her reelection bid is failing,” Sen. Greg Baca, R-Belen, the Senate minority leader, said in a statement.

“Democrats in the Legislature are shredding her agenda, as many of her proposals have already been tabled or delayed,” he added.

Baca said the governor’s progressive base “is actively and publicly opposing several of her key initiatives,” including stiff opposition from environmental groups over the hydrogen hub bill.

“The governor has obviously seen polling demonstrating that Republican-led policies to cut taxes, fight crime and improve education are popular with New Mexicans. Unfortunately, she cannot seem to convince her Democratic colleagues in the Legislature to join the Republican initiatives,” he said.

“As she runs for reelection, she is clearly trying to undo some of the damage inflicted during her first three years in office,” Diamond said in a statement. “In order to do this, however, she had to embrace Republican ideas like repealing the tax on Social Security and getting tough on crime.

“We now know that the governor’s Democratic colleagues in the Roundhouse are apparently not on board with several of her key proposals, and with less than three weeks to go, the clock is running out.”

‘Plenty can happen in three weeks’

“Increasing educator base salaries flew out of its first committee with unanimous support, increasing penalties and removing the statute of limitations for second degree murder passed unanimously [out] of its first committee, the Clean Fuel Standard Act is headed to its second committee and so is the Buy New Mexico expansion — all priority bills for the governor,” Nora Meyers Sackett wrote.

Sen. Daniel Ivey-Soto, D-Albuquerque, said he hasn’t been looking at “what’s going on overall in the Legislature,” but the Senate Rules Committee, which he chairs, has been approving the governor’s appointments.

“We’re ahead of the game in terms of confirmations from what we’ve been in most years, and none of her conferees have had any problems,” he said. “She has a voters’ rights bill that we’re meeting on, and I plan to move that bill out of the Rules Committee on Monday so we can proceed. So, from my little corner of the world here in the Legislature, the governor is doing quite well.”

While lawmakers are starting to pick up the pace of considering bills, the first days of the session have been focused on preliminary and procedural matters, such as introducing legislation on the floor of each chamber.

Sackett noted the topsy-turvy nature of the Roundhouse.

“There are ebbs and flows to the legislative process, stops and starts, and that’s nothing new. Plenty can happen in three weeks,” she wrote, adding the administration will continue to work with the Legislature “to move each of our important initiatives forward, all in the interest of the best outcome for New Mexicans.”

Rep. Derrick Lente, D-Sandia Pueblo, acknowledged the governor’s agenda seems to have gotten off to a slow start — he noted, for instance, the stalled hydrogen bill — but he said the governor is “quite persistent” and will work to get her priority bills approved.

“If she wants something done, she tries her best to do it,” Lente said.

Still, he questioned whether Lujan Grisham has “the staff or the capacity” to lobby legislators like she has in the past.

“I haven’t received any one call — not to say that I’m on any committee that has any of her legislation in there currently — but I have not heard anything from anyone in her staff,” he said.

House Minority Leader Jim Townsend, R-Artesia, said communication, including with members of the opposite party, is key to building support for good legislation.

“We haven’t talked to her,” he said. “I haven’t seen her on the House floor. I saw her out walking down Canyon Road one day. But her interaction with the Legislature, to my knowledge, has been” missing.

Lujan Grisham’s call to cut taxes, a focal point of her State of the State address on the first day of the session, included repealing a state income tax on Social Security benefits. A Republican-sponsored bill to end the taxation stalled in committee, but Townsend described the delay as a political move.

“Listen, that is pure political B.S.,” he said. “That Social Security bill has been carried by [two Republican representatives] for a number of years, and she has opposed it.

“Her legislators killed that bill, the bill that she thought was important, presumably because they wanted one of their own members who had hijacked the idea … to have their name on it,” he added. “It’s just a matter of playing politics in New Mexico, and New Mexicans are getting real smart to this. They’re not buying this anymore.”

The governor is backing a similar Social Security bill sponsored by a Senate Democrat who also has pushed unsuccessfully for the legislation for several years.

Paul Gessing, president of the Rio Grande Foundation, an Albuquerque-based free-market think tank, said he and others were surprised the governor called for a repeal of the tax on Social Security income but welcomed the idea.

“The governor is, I would say, a moderate progressive, depending on the issue, whereas there’s a lot of progressive progressives who aren’t going to go along with these priorities,” he said. “It’s going to be an interesting session. I don’t know if the governor will get them all in a room and basically tell them, ‘Look, you better get on the train before the election or it could be ugly.’ I mean, the polling doesn’t look great nationwide.”

Gessing said President Joe Biden is unpopular, and Lujan Grisham is at least considered vulnerable in her reelection bid.

“I think there’s a political reality versus an ideology factor here that I think she probably has a better grasp on than the legislators do,” he said.