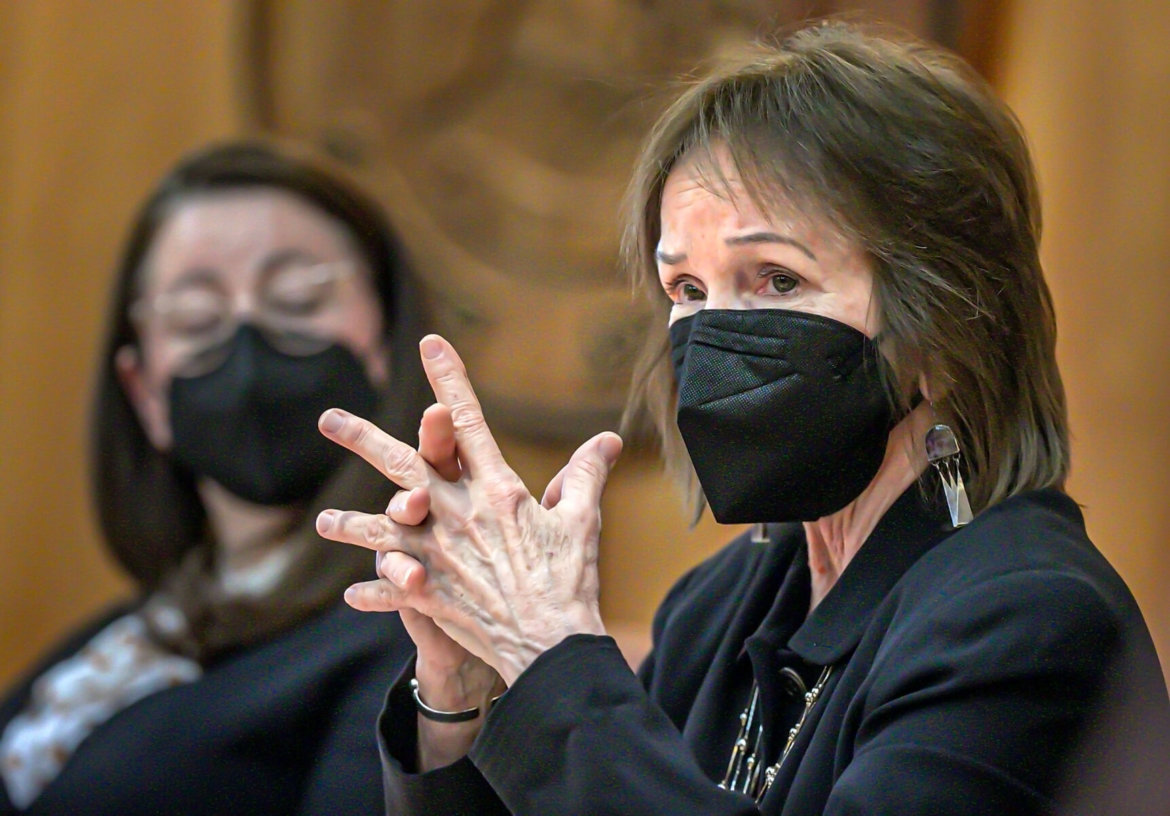 Senate President Mimi Stewart thanks veteran Albuquerque lawyer Randi McGinn for her testimony before members of the Senate Judiciary Committee at the Roundhouse on Friday.

Randi McGinn of Albuquerque, who has worked as both a prosecuting attorney and public defender for over 40 years, spoke to the Senate Judiciary Committee on Friday about proposed changes to the state’s pretrial detention system for defendants accused of violent crimes and other measures touted by the governor and Democratic lawmakers who have taken a tough-on-crime stance to tackle what many see as an out-of-control problem.

McGinn instead urged the committee to invest money in New Mexico’s judicial system, which she said is underfunded and understaffed.

She pointed to the fiscal impact report for a bill that would alter New Mexico’s pretrial detention system — putting the burden on a defendant to prove they aren’t likely to commit further violence if they are released from jail while awaiting trial, rather than requiring prosecutors to prove the defendant poses too high a risk to be released.

The report estimates it would cost $13.8 million annually to detain up to 1,262 more defendants until their trials. McGinn said lawmakers should instead invest that money “in the courts, in the district attorneys and public defenders and the Albuquerque Police Department.”

Sen. Mimi Stewart, D-Albuquerque, said she liked that idea because the judiciary system is “weighed down and overloaded.”

The initial response to handling violent crimes, McGinn said, is “to hit it with a bigger hammer,” such as tougher penalties and detention policies. “We are doing the same thing over and over again without really stopping crime.”

Gov. Michelle Lujan Grisham has made fighting crime a priority of her legislative agenda.

Among the measures she supports during this year’s 30-day legislative session is one that would eliminate the six-year statute of limitations for second-degree murder charges. While that bill — which did not gain traction in previous legislative sessions — has not yet generated controversy, the measure that would change pretrial detention polices has been contentious.

Two recent reports on the pretrial detention system, including one from the Legislative Finance Committee, say few defendants who are released while awaiting trial are rearrested for violent crimes during that period.

But critics of the reports say suspects in several high-profile Albuquerque homicides in recent years were violent offenders who had been released ahead of their trial.

McGinn argued holding more people behind bars before their trial won’t make much of a difference.

She said New Mexico jails 773 out of every 100,000 state residents, compared to a national rate of 664 per 100,000 people. “We jail more people than most states,” she said. “Despite having doing this, it hasn’t made a difference in the crime rate.”

Many of the crime bills the Legislature is considering in the current session “don’t really do anything about crime,” she told the committee. “All they do is allow you to say that you’re doing something that everyone can see … being tough on crime.”

Sen. Greg Baca, R-Belen, disagreed. He said such initiatives are about “making our streets safer.”

“Incarceration has one benefit,” Baca said. “It reduces recidivism by keeping people in jail when they might be out committing crimes.”

But, he added, the “broad step of locking people up while they are awaiting trial is certainly not the right way. I don’t want to go the other way either. There’s got to be some in-between.”