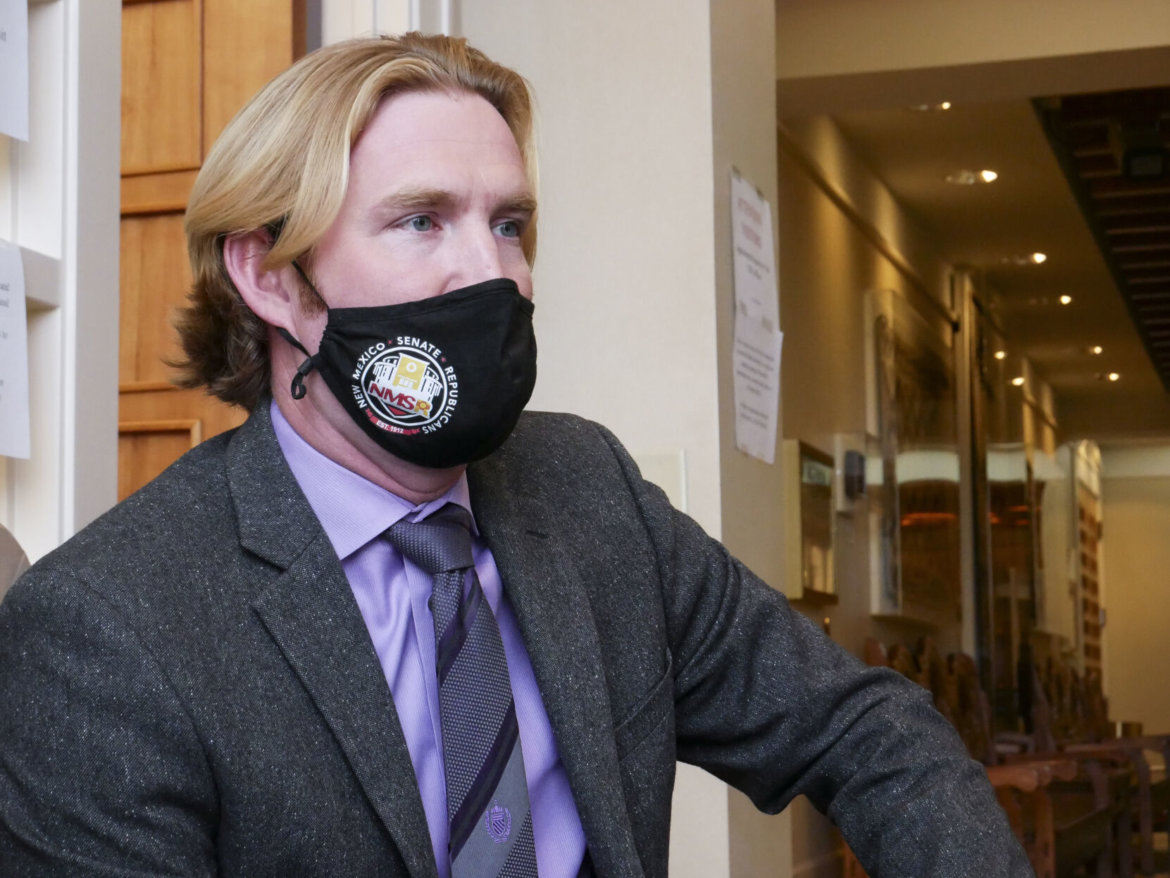 Sen. Cliff Pirtle, R-Roswell, sits in the Roundhouse last week. Pirtle introduced a bill Monday that would require actors handling firearms on film sets in New Mexico to take a gun safety course from the state Department of Game and Fish before the cameras start rolling.

Actors and other personnel who handle firearms on film sets in New Mexico would be required to take a gun safety course from the state Department of Game and Fish before the cameras start rolling under a bill introduced Monday.

A film production company with workers who fail to comply with the requirement of obtaining a “valid certificate of competency in the safe handling of firearms” would be ineligible for the state’s film credits under Senate Bill 188.

The legislation was born out of the Oct. 21 fatal shooting on the Rust film set at Bonanza Creek Ranch near Santa Fe. Authorities have said actor and co-producer Alec Baldwin’s prop revolver discharged a live round during a rehearsal, killing cinematographer Halyna Hutchins and wounding director Joel Souza.

“I was heartbroken to learn of the tragic incident on the Rust film set,” Sen. Cliff Pirtle, R-Roswell, who is sponsoring the bill, said in a statement. “Having personally used a similar revolver on film sets, I know there is no space to be cavalier with these firearms.”

The bill would require all actors and prop personnel “to be familiar with the deadly power of firearms and trained in proper gun safety,” a news release states. The course would teach firearms safety and responsible firearm use.

Jennifer Esquivel, a spokeswoman for the New Mexico Film Office, said the agency is in the process of reviewing the bill.

“We are just in receipt of this newly introduced legislation by Senator Cliff Pirtle and are in the process of due diligence at this time,” Esquivel wrote in an email.

Nora Meyers Sackett, press secretary for Gov. Michelle Lujan Grisham, said the Governor’s Office has not yet seen the legislation but will review it.

“Workplace safety in any industry is of the utmost importance to this administration,” Sackett wrote in an email.

In a telephone interview, Pirtle said the legislation may deter some film production companies from working in New Mexico, where the filmmaking industry has expanded in recent years.

A recent report commissioned by the state Film Office found the film, television and media industry created $854 million in direct spending in fiscal years 2020 and 2021.

The state, which handed out about $160 million in tax credits during that time, continues to generate buzz in the industry. MovieMaker magazine recently ranked Albuquerque and Santa Fe among the “Best Places to Live and Work as a Moviemaker.”

While some production companies may sidestep New Mexico if the legislation goes into effect, Pirtle said it would only increase safety on sets.

“I think it’ll be a positive because the production companies, now with this tragedy having occurred, will know that in New Mexico, every single actor, whether they’re background or not, have had some type of training,” he said. “They’ll be able to hold each other accountable and know the proper way of handling firearms.”

Pirtle also said the bill would give production companies an added layer of protection by having film set personnel trained in gun safety. In addition, it would “take a little bit of a liability risk off of them knowing that everybody has received proper firearm training,” he said.

The bill would only affect productions with firearms on set.

“It would be mostly Westerns and action movies that would have this requirement,” he said.

Pirtle has worked as an actor and handled firearms. On one set, he said he personally observed the armorer load a pistol he would be using in filming to ensure it was safe. On another set, he said he “inspected every single round” loaded into a revolver with blanks because he didn’t want to take any risks. Both sets were “very safe and careful,” but not everyone grew up around firearms and knows how to handle them like he does, he said.

“Having the experience of going through the safety training [with my son] and the experience of handling firearms on set that were shooting blanks, I knew that there was a way that we could do this in a commonsense approach and keep people safe,” he said.

Firearms are not props but “deadly weapons regardless of the context of use,” Pirtle said in his statement.

“My son, at 10 years old, knows this,” he said. “He has undergone standard training done by the New Mexico Game and Fish Department because I wanted him to know that though guns are a tool in my household, they are still deadly. I believe responsible gun ownership is essential to our freedom. Unfortunately to the Hollywood elite, the talk around guns is all too abstract. This is a simple bill to bring some gravity back to the use of firearms on film sets.”