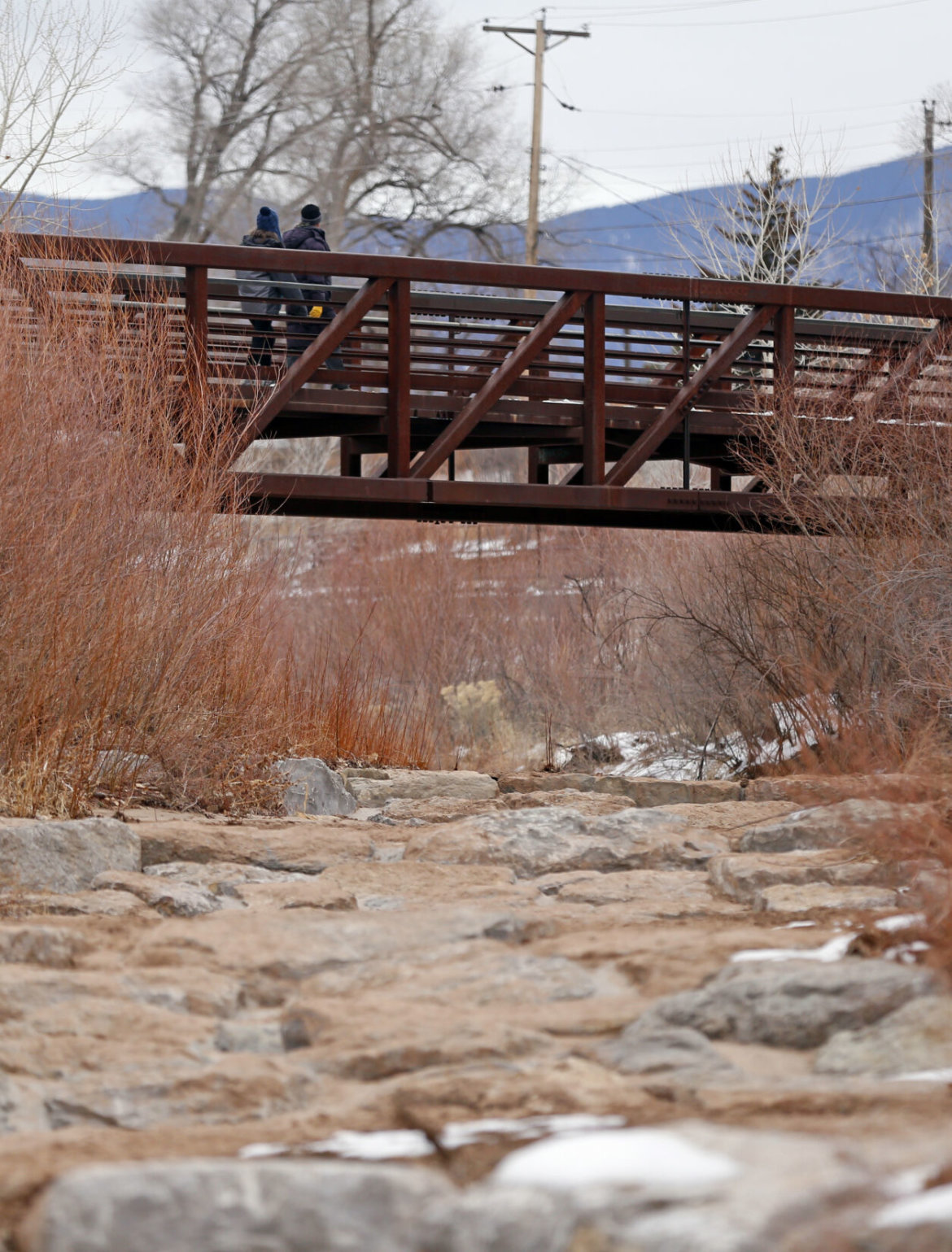 eople walk on the River Trail over a dry Santa Fe River near Frenchy’s Field Park on Tuesday.

Drought, climate change and low precipitation, he noted, are leaving their mark on New Mexico’s vegetation and fragile ecosystems.

“Dying trees in the watersheds and habitats,” the director of the Interstate Stream Commission told members of the Senate Conservation Committee Tuesday. “That’s the first place we see it.”

Though Schmidt-Petersen said a first draft of a 50-year water plan won’t be made public until early summer, he told lawmakers the document will focus on recommendations for improving watershed systems — highlighting where water resiliency programs work and don’t work. It also will include suggestions on how individual communities can develop best water-use practices.

“We need to assess and plan for resilience,” he said.

The report will include input from a number of public webinars the Interstate Stream Commission conducted this past fall regarding water use and preservation methods in public water systems, watersheds, agriculture and industry.

Meanwhile, he said his agency’s research shows 77 percent of the state’s water use goes to irrigation for agriculture. Another 10 percent goes toward public use. Perhaps surprisingly, just 6 percent goes to industry, including mining, oil and gas. The remaining 7 percent is evaporation, he said.

Much of what Schmidt-Petersen told the committee members would not come as much of a surprise to anyone following the state’s water issues — particularly those grappling with how to ensure everyone has enough in a state where there’s not enough to go around.

Not only has the state been dealing with extreme to extraordinary drought conditions for the past decade, but New Mexico’s average temperature has been increasing over the years, which leads to more evaporation of water, Schmidt-Petersen said.

Committee members asked few questions about the still-developing report. Both Sen. Steve Neville, R-Aztecnd Sen. Joseph Cervantes, D-Las Cruces, wondered if the state’s many ongoing court cases involving water rights both within New Mexico and with other states need to be resolved before the 50-year plan could be fully developed.

Cervantes said some of those court cases have dragged out for years. Referring to the state’s history of ignoring water rights and water use challenges, he said, “We bury our heads in the sand.”

But, he said, as water sources dry up “there’s going to be a lot more sand, and a lot less water, to bury our heads in.”

The hearing came at the same time members of the House Agriculture, Acequias and Water Resources Committee agreed to support a bill appropriating $12 million to the state Office of the State Engineer. House Bill 24 would make the nonrecurring appropriation to help the agency plan, manage and administer its duties as the main overseer of the state’s water systems.

Supporters of the initiative requested an amendment that would dole out that money over a three-year period, a proposal the bill’s sponsors, Rep. Tara Lujan and Rep. Andrea Romero, both Democrats from Santa Fe, agreed to fulfill. The bill is scheduled to return to that committee for approval later this week, Romero wrote in a text message.

Among other goals, that money would help the agency deal with a staff vacancy rate that has hovered between the 20 percent and 30 percent mark over the past few years, according to that bill’s fiscal impact report.

Meanwhile, Gov. Michelle Lujan Grisham has not yet appointed a new state engineer to replace John D’Antonio, who has served for nearly three years before he resigned in December in the wake of those staffing shortages.

Nora Meyers Sackett, spokeswoman for Lujan Grisham, wrote in an email Tuesday, “We are in the process of filling the position of state engineer and anticipate doing so in the near future.”