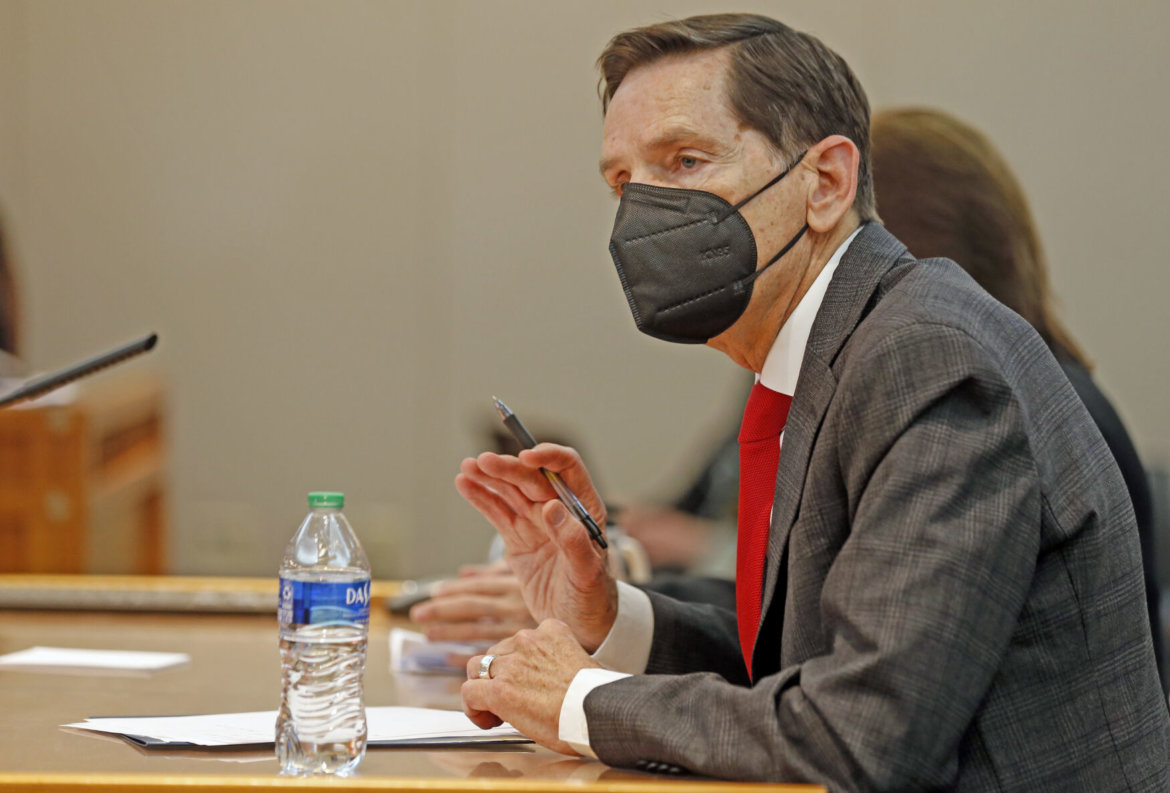 Kurt Steinhaus speaks to the Senate Rules Committee on Wednesday as it discussed his confirmation as secretary of public education. Steinhaus was questioned about subjects ranging from masks in schools to the revolving door of leaders in his job. But senators praised his credentials and voted 37-4 to confirm him.

No one questioned Steinhaus’ credentials as a longtime educator and administrator during two separate hearings on his confirmation, which the Senate ultimately passed 37-4.

Rather, some Republicans zeroed in on the revolving door of Cabinet secretaries at the department, the impact of school lockdowns during the pandemic under orders from Gov. Michelle Lujan Grisham, a Democrat, and other contentious issues.

Among the questions Steinhaus faced from Republicans on the Senate Rules Committee: Did the state make the right decision in suspending board members who ignored a public health order and voted to make face masks optional for students in the Floyd Municipal Schools?

Steinhaus said it did.

“If I’m confirmed and if I’m in a role where I’m faced with the safety of children versus the opinions of somebody else, I will always choose the safety of children,” he said. “So in that particular situation, if that decision is about students and their safety and what the medical professionals are telling me needs to be done, I will go with what’s best for students.”

Should the school year be extended?

Should students be required to be vaccinated to attend school?

“I am not aware of any conversations to require a vaccine,” he said, adding he isn’t a medical professional and follows the advice of the governor’s medical team.

“They help us learn the science of what’s going on,” Steinhaus said. “And maybe, most importantly, those doctors from the Department of Health are also parents, so they understand the challenges of their decisions and how they would impact schools.”

“I hope that the third time’s the charm because so far this governor has been dead wrong on education,” said Brandt, who was among the four Republicans voting in opposition of Steinhaus’ confirmation.

Sens. Greg Baca of Belen, Cliff Pirtle of Roswell and Gregg Schmedes of Tijeras also voted against the confirmation, though they, too, indicated their opposition had more to do with the governor’s education policies than on her appointment.

“If I vote no … I just want you to know it has nothing to do with your credentials or the hopes that I have for you but more of just a sign of my displeasure of how everything at [the Public Education Department] has gone,” Pirtle said before the Senate Rules Committee vote.

“I don’t know that I can support the nomination today,” Baca said, also in the committee hearing. “It is not a direct indictment of you. It is, however, an indictment on the administration’s process and the number of [public education] secretaries that we’ve been going through.”

During the committee hearing, several educators and others testified in support of Steinhaus’ confirmation.

“There are 89 superintendents in New Mexico; every one of them support this gentleman as secretary of education,” said Stan Rounds, executive director of the New Mexico Coalition of Educational Leaders.

Rounds called Steinhaus, the former superintendent in Los Alamos, a man of vision and integrity.

“He is a man who is not afraid to interact and talk about the real issues we have in New Mexico schools,” Rounds said. “He has been one of us. He is a school superintendent. We still count him among our ranks.”

“Under our [Department of] Workforce Solutions, we had a secretary that wreaked havoc on us financially before before they left. We have a revolving door of [Children, Youth and Families Department] secretaries, and the only thing that remains consistent is an increasing number of dead kids under our watch with those secretaries,” she said.

“I have very little faith and very little confidence in many of our secretaries,” Diamond added, “but I have a lot of hope in you.”