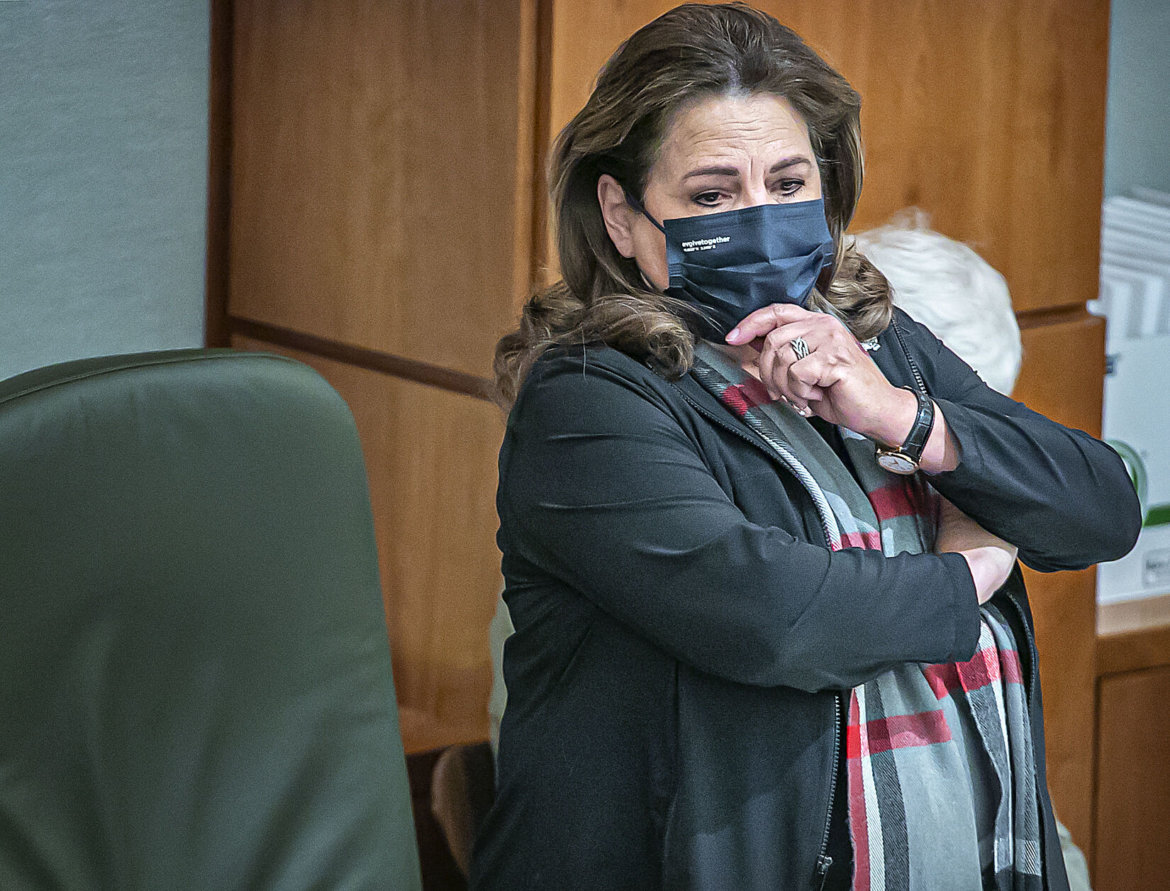 Rep. Patricia Lundstrom, head of the House Appropriations and Finance Committee, listens to debate Feb. 3 on the House floor about a record-high $8.47 billion budget that would boost state spending by nearly 14 percent.

A record-high $8.47 billion budget that would boost state government spending in New Mexico by nearly 14 percent in the upcoming fiscal year passed the House on a 56-13 vote Thursday after a three-hour debate that largely focused on whether the unprecedented level of spending is sustainable.

The proposed budget, which includes funding to give teachers, judges and other state workers raises, as well as what one lawmaker called “transformative investments” statewide, now heads to the Senate for consideration.

Though the spending plan received bipartisan support, the 13 lawmakers who voted against the budget bill are all Republicans.

Members of the GOP raised concerns about the spending increase of about $1 billion and introduced a substitute proposal that would have increased spending by about half of what’s proposed in the budget bill, or 7 percent. The Democrat-controlled chamber rejected the substitute.

The bill the House approved leaves about $400 million for tax-related initiatives, including measures pending approval in the Legislature during the remaining two weeks of the 30-day session.

Even the sponsor of the substitute bill, Rep. Jason Harper, R-Rio Rancho, recognized his proposal was dead on arrival.

“I understand that this is not going to be adopted and that we don’t need to spend all of our time talking about this when we have the actual bill … that should be the focus of this debate,” he said.

The debate, however, veered into politics. Critical race theory, to be exact.

Rep. Rebecca Dow, R-Truth or Consequences, who is running for governor and has pushed to ban critical race theory in public schools, introduced an amendment calling for the Public Education Department not to approve the operating budget of any school offering courses “related to any theory or ideology that espouses the view” that one race is inherently racist, sexist or oppressive, or responsible for the oppression of another race.

Democrats quashed her proposal, too, voting to table the amendment.

Democrats lauded members of the House Appropriations and Finance Committee for what Rep. Moe Maestas, D-Albuquerque, called a “tremendous job” of developing the budget.

“We are in a completely different world than we were from April of 2020, when the pandemic hit the international community and we had to come back and cut budgets in fear of an economy just bottoming out,” Maestas said. “That is not the case [for the upcoming fiscal year]. There are robust revenue streams coming into the state.”

The budget calls for reserves of $2.57 billion, or 30 percent of spending levels.

“As part of the appropriations process, we go through an agonizing process of consensus revenue building; we go through stress testing,” she said. “We are very, very close to how the economy is moving, and at this point, at least for the few years out that we’re looking at, it is sustainable.”

The high level of reserves would allow the state to deal with lower-than-expected revenues or other financial challenges, she said.

“The reserve provides a cushion should we get into some kind of trouble like we did a few years ago in oil and gas, particularly [when] oil prices dropped,” she said. “We had those funds available for us.”

During a news conference before the floor session, Lundstrom said New Mexico has an opportunity increase spending by 13.8 percent and still maintain a robust rainy day fund.

“When I talk to the constituency of New Mexico, they would rather see that money put to work as opposed to being a reserve account,” she said. “So either we have a 13 percent spend with a 30 percent reserve, or we have a 60 percent reserve with a 6 percent spend. But I can tell you, with the needs that we have in this state, people want that money out. They want it working for them.”

Lundstrom said the appropriations committee had an “enormous opportunity and responsibility” in this year’s legislative session.

“We’re proposing responsible investments in education, public safety, rural communities, our environment, energy and economic development,” she said. “We believe that this will lead to transformational outcomes for the people of our state.”

But some lawmakers remain apprehensive.

“I’m just concerned that we got a pay raise, but we’re spending more than we got in our pay raise, and so what that means is eventually we have to go and cut things or pull things back,” said the House minority whip, Republican Rep. Rod Montoya of Farmington.

“I was here when we swept the balances from our K through 12 public schools, and that was incredibly painful,” he added. “No one wanted to do it, but we put ourselves in a situation where that was one of our few remaining options.”

In addition to needing approval from the Senate, the budget bill also needs the blessing of Gov. Michelle Lujan Grisham, whose office has expressed some reservations about the spending plan.

The governor’s press secretary said earlier this week the Lujan Grisham administration would “continue to advocate” for a budget that includes additional funding for higher education and public safety, among other areas.