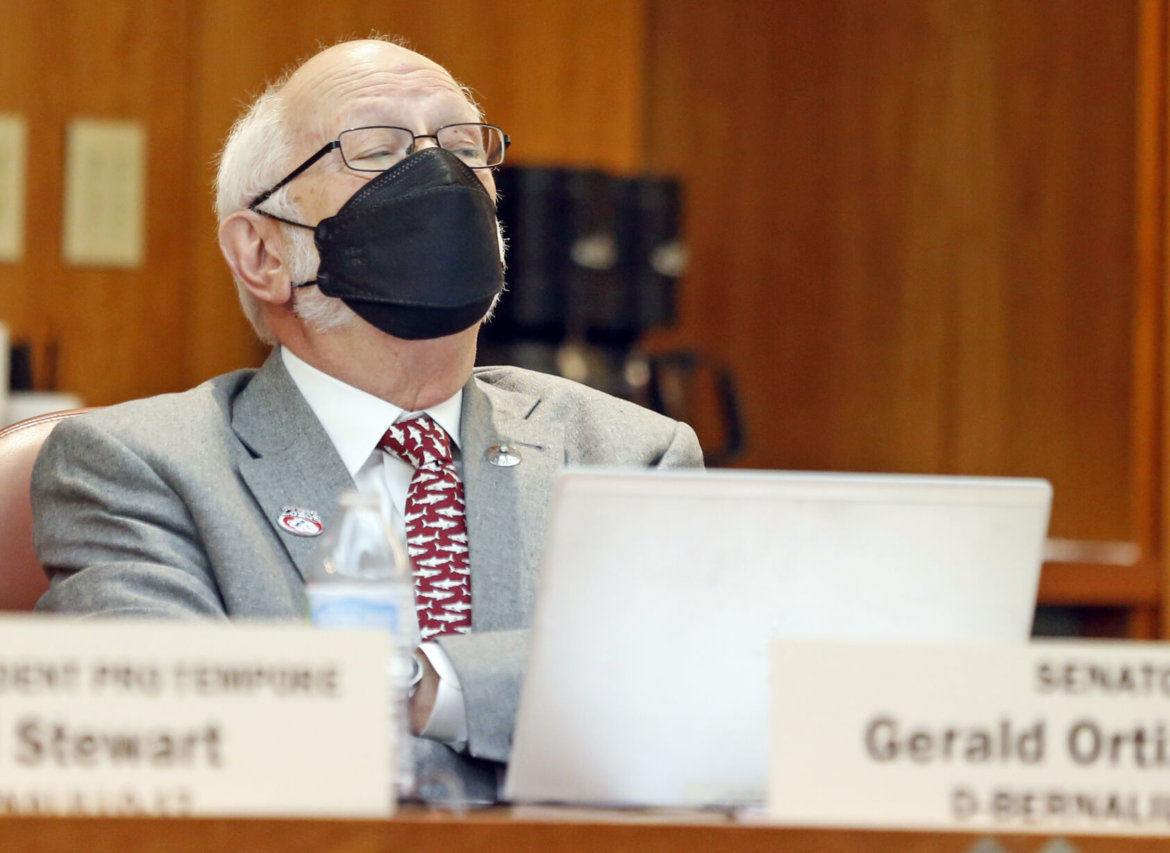 Senator Gerald Ortiz y Pino, D-Albuquerque, reacts as a person uses 'the big lie' that the 2020 presidential election results were fraudulent to argue against Senate Bill 8 in a Senate Rules Committee meeting Friday.

The Senate Rules Committee approved an amendment striking a provision from Senate Bill 8 that would have allowed 16-year-olds to vote. The chairman, Democratic Sen. Daniel Ivey-Soto of Albuquerque, then abruptly ended the hearing before a final vote on the New Mexico Voting Rights Act.

“It’s a long day, but this is an important bill,” Ivey-Soto said in an interview Friday night. “It deals with important rights and important issues [affecting voters]. Frankly, it’s taken a long time, but it’s been worth it.”

The committee is scheduled to reconvene Monday, putting the bill on a tight timeline with less than two weeks left in the 30-day session.

As amended, the bill would allow 17-year-olds to vote in local elections — but only if they turn 18 by the next general election.

The bill, which is backed by Gov. Michelle Lujan Grisham, also would allow felons to vote after they’ve completed their sentences.

In addition, qualified electors would be automatically registered to vote after completing a transaction at the Motor Vehicle Division, though they could opt out afterward. The bill would also create a permanent absentee ballot list that would allow voters to receive mail ballots for every election without requesting one each time; allow New Mexicans without a state-issued ID to register to vote online with a Social Security number; and make every statewide election a holiday.

Nearly 90 people weighed in on the legislation over nearly four hours at the start of the hearing. Ivey-Soto didn’t impose any time restrictions, which perturbed some of his colleagues.

“I really do think it’s time to get to the bill,” Senate Majority Leader Peter Wirth, D-Santa Fe, the lead sponsor of the Voting Rights Act, said before Ivey-Soto called a recess and ended the public hearing.
The bill drew support and opposition alike, though the provision to allow 16- and 17-year-olds to vote sparked the most discussion and debate.

One of the speakers told lawmakers young people have the most at stake in elections and should be allowed to vote.

Others, however, said 16- and 17-year-olds lack the maturity to vote.

“I remember very vividly being 15 or 16 myself and demanding that I have quote unquote rights,” Bridgett Harring, who lives in Albuquerque, told lawmakers. “My mother’s answer to that was, ‘When you have your own job or you’re on you own, when you’re supporting yourself and you have life experience, then you can have those rights.’ “

Sarah Smith, a member of the New Mexico Freedom Alliance, which describes itself as a nonpartisan coalition that advocates for civil liberties and constitutional representative government, said she had “big concerns” with allowing people under age 18 to vote.

“However, 16-year-olds are not legally allowed to purchase cigarettes, to purchase alcohol, to join the armed forces or to obtain a line of credit,” she said. “This is because their brains are still developing.”
But Janet Wallet-Ortiz, a retired professor, said many 16- and 17-year-olds are more mature than some adults she knows.

“We all know across the country that the ‘big lie’ is alive and well,” she said. “Our [U.S.] Senate failed to pass the voting rights bill, and so that makes SB 8 even more critical.”

But the legislation will have to wait for its first committee vote.

Ivey-Soto said a “compilation problem” surfaced when the committee took a 30-minute break near the end of the hearing.

He initially said the committee would reconvene Saturday but later announced during an evening Senate floor session the hearing would resume Monday.