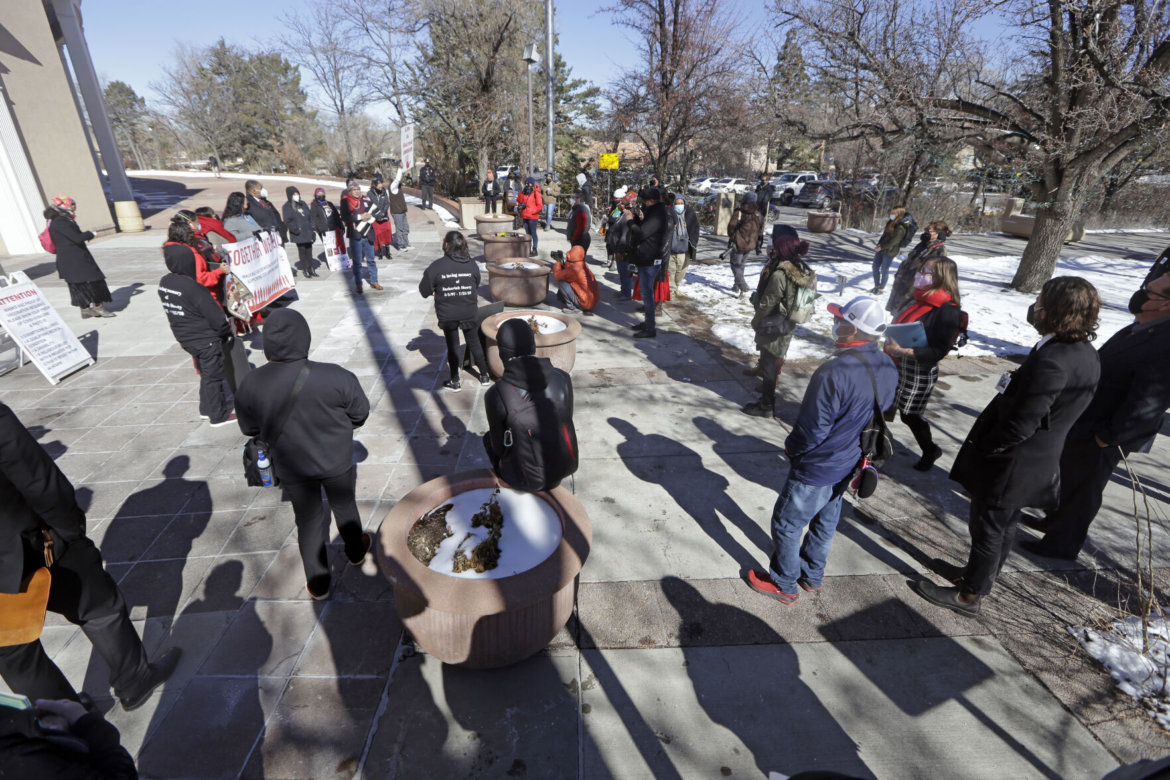 Nathaniel Brown, with the Navajo Nation's Council of Delegates, the Sexual Assault Committee and Human Trafficking Council, addresses a crowd Friday in front of the state Capitol.

Pepita Redhair’s family hasn’t seen her since March 2020, when she left her mother’s home in Crownpoint on the Navajo Nation to visit her boyfriend in Albuquerque.

Her older sister, Shelda Livingston, 41, said their mother has left Redhair’s room in Crownpoint untouched, awaiting the skateboard-loving 29-year-old’s return. She said Redhair “was always happy — a light of the family.”

Livingston, who spoke at a rally for missing and slain Indigenous women and relatives at the Santa Fe Plaza on Friday morning, said in an interview the pandemic delayed action on her sister’s case by Albuquerque police.

It took months for police to start investigating and interviewing, she said, and the case remains open.

“Nobody knows until it actually happens to your sister, your mom, your auntie, your uncle, your brother, your sisters,” she told dozens gathered Friday morning. “These are people we need to bring home.”

New Mexico has the highest rate of missing Indigenous women in the country, according to the National Indigenous Women’s Resource Center — and many at Friday’s event blamed complexities of jurisdiction over Indigenous missing person and murder cases nationwide.

Advocates hope New Mexico lawmakers will pass two bills that would allocate more resources toward finding missing Indigenous people in the state and bridge gaps between law enforcement agencies.
When a Native American goes missing on tribal lands, tribal law enforcement is in charge of the case, or sometimes the FBI — but tribal courts have no jurisdiction over non-Native people.

When a Native American goes missing on nontribal land, local law enforcement is responsible for investigating.

Gov. Michelle Lujan Grisham signed a law establishing a Missing and Murdered Indigenous Women Task Force in 2019, and a 2021 report from the group showed that while Native American women had the highest rate of homicide among ethnic groups in the state, inconsistencies in data across different agencies created an incomplete picture.

Some speakers Friday also said a lack of funding has led to slow police response times and fewer resources on reservations.

When Pamela Foster’s children, Ian and Ashlynne Mike, were lured into a stranger’s van in Shiprock on the Navajo Nation, she said, there was a daylong delay in issuing an Amber Alert because of jurisdiction issues between the state and reservation.

“There were no lifesaving systems in place,” Foster said Friday. “There were no 911s to dial. At a time we needed help, there was none.”

Her son, Ian Mike, 9, survived the 2016 abduction — but Ashlynne Mike, 11, was sexually assaulted and slain.

Two bills are on the table this legislative session in New Mexico that, if passed, would push local government agencies to work more closely to solve Indigenous missing person cases like Ashlynne’s Law has.

“I stand here as testament that change does happen, and we need to fight for this cause,” Foster said before the crowd that gathered Friday marched to the Roundhouse.

The Senate Judiciary Committee was set to hear the bill Friday afternoon, but because of a delay from another committee, it still had not reached the floor Friday evening.

Senate Bill 13, introduced by Lopez, Pinto and Rep. Andrea Romero, D-Santa Fe, would create a “Missing in New Mexico” event at which families could file or update missing person reports, and law enforcement from different jurisdictions — including tribal agencies — could come together.

The bill also would establish a clearinghouse within the Department of Public Safety to centralize missing person information and promote intrastate communication.

More info
Pepita Redhair was last seen March 27, 2020 in the 1000 block of Clements Street SW in Albuquerque. She is 5-foot-1, 141 pounds with brown hair and brown eyes. She has a dinosaur tattoo on her right forearm and a koi fish tattoo on her left forearm. She also has two small moles on her chin.

More information about Redhair is available at missingpersons.dps.state.nm.us.

Any information about her can be reported to the Albuquerque Police Department at 505-242-2677.

Outreach and resources for victims of human trafficking is available through the 505 Get Free hotline at 505-438-3733. More information is available at www.505getfree.org.