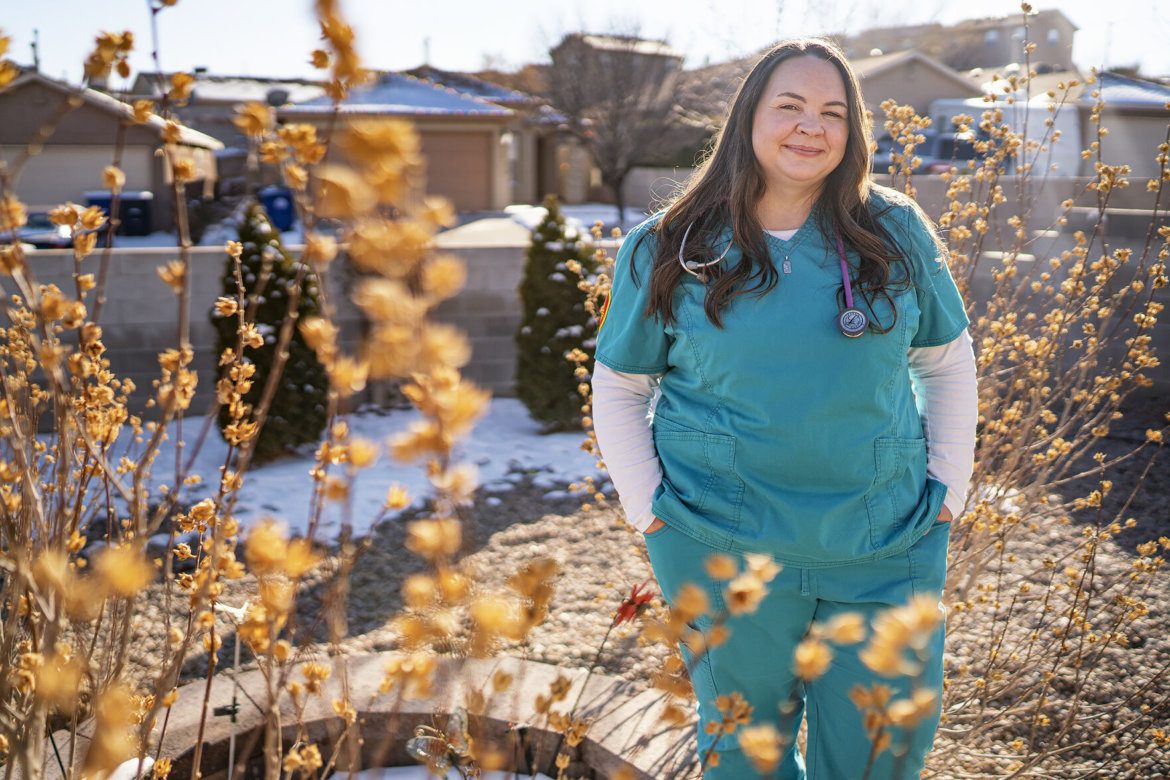 Angela Cravens stands in her backyard last week in Albuquerque. Cravens is studying to be a nurse at the University of New Mexico with hopes of transitioning into a second career. She plans to graduate by the end of 2022.

Angela Cravens, a longtime employee in the microbiology lab at the Department of Veterans Affairs’ medical center in Albuquerque, hears about the state’s crisis-level nursing shortage nearly every day.

Cravens wants to help. She is studying at the University of New Mexico to be a nurse with hopes of transitioning into a second career.

A legislative report issued in July 2020 said New Mexico needed 6,223 more registered nurses, a number that likely has grown amid the pandemic as overworked nurses have become worn down and burned out.

But the state’s nursing problems are only part of the story — one that isn’t completely tied to a draining, seemingly endless health care crisis brought on by the coronavirus.

Those getting ready to enter the medical field say they’re excited to lend a hand. But experts say the problem — there weren’t enough in the medical field before the pandemic and nowhere near enough now — won’t be solved with enthusiasm alone, particularly when it comes to nursing.

That field is the focal point of efforts during this legislative session, and the reasoning is straightforward: Medical officials and legislators agree there are not enough training programs, not enough facilities for programs and, often, not enough nurse educators.

“In order to have more students, you have to have more space, more facilities,” said Sen. Liz Stefanics, D-Cerrillos, who sponsored Senate Bill 50, which calls for a $15 million to boost nursing school programs.

The funding, proponents say, would allow for more students like Cravens to enroll in college nursing programs. Lawmakers have proposed several other bills to address the shortage as well. One would allow out-of-state licensed nurses to work in New Mexico within 30 days; now, the process could take months. Another would allocate $750,000 to help nurses pay off student loans. Two pieces of legislation would extend a $5,000 tax credit for rural health professionals to chiropractors, midwives and practitioners of oriental medicine who work in remote communities.

The question remains: Will any or all of those measures be enough for the state to begin rebuilding a workforce that had been in decline for years?

The New Mexico Hospital Association questions whether the array of piecemeal proposals will have much of an effect. Pamela Blackwell, a policy director for the organization, wrote in an email there are no “comprehensive bills that would address the healthcare professional shortage issues in an impactful way.”

It’s also unclear whether tax credits for rural health professionals are effective. Nursing lobbyist Linda Siegle said she knows of no study analyzing whether the incentive has paid off.

“We don’t know what kind of effect it has in terms of recruitment or retention in rural areas,” she said. “We think it might help with retention.”

The August report recommends a more robust initiative: establishing a loan program providing up to $150,000 for doctors and other medical workers to set up or expand practices in rural areas.

Still, some health care experts say lawmakers are on the right the right track, especially when it comes to attracting more nursing students and expanding training programs for nurses.

He also said he hopes the Legislature approves more funding for Medicaid reimbursements for hospitals because “it helps us recruit and retain providers and staff. When we know that reimbursement is coming, we can better prepare for budget challenges like staff raises.”

“Prioritizing funding for nursing programs is big,” said Terri Tewart, dean of the nursing program at Santa Fe Community College. Although enrollment in the local college’s nursing program has declined over the past year, she said there is continued interest in the profession.

Christine Kasper, dean of the University of New Mexico’s College of Nursing, said enrollment there has increased 108 percent over the last five years — a welcome sign for a state that has seen many nurses leave the field.

“I wouldn’t say it’s a worst-case scenario, but it’s pretty close,” Kasper said. “There’s an awful lot of nurses out there, but a lot are not working in nursing. They’re stressed out; they quit or moved into other jobs.”

According to the most recent data provided by the state Higher Education Department, there were about 7,625 students enrolled in nursing programs in New Mexico in the fall 2020 semester.

Interestingly, the nursing field is beginning to attract some in mid-career who worked in other professions.

Cravens, 42, said she watched nurses at the Raymond G. Murphy VA Medical Center tend to her grandfather, a World War II-era veteran, and was inspired to change careers. She plans to graduate from UNM’s nursing school by the end of 2022.

A former lobbyist for the American Cancer Society who also worked in the state Department of Health’s Infectious Disease Prevention and Control Bureau, Adondakis said she wants to make a difference in an industry that could use some help.

“I know as a nurse I can advocate for my patients, make sure their needs are being met, make sure they are active about making the right decisions with their own health care,” she said.

Like Cravens, she is confident there will be a job in New Mexico waiting for her.

But she cited other problems hindering the development of a stronger health care workforce: a lack of qualified nurse educators and a delay in getting student nurses into hospitals for hands-on clinical experience.

“The easy solution is to say we need more nurses in our nursing school,” said Troy Clark, president and CEO of the New Mexico Hospital Association. “That’s a true statement, but we need more educators who can help teach a larger enrollment.”

Clark said the state’s nursing programs graduate about 1,200 students each year, and there are another 300 waiting to get into programs. Even if those 300 prospective students had slots in nursing programs and schools were graduating 1,500 a year, it would take at least four years to fill the gap, he said.

The Legislature’s efforts to address the shortage in the past several years have been “sporadic or spotty,” Clark said. “The problem is, a multifaceted solution is needed. It’s going to take five years or more to see the benefits of it. During that time, we have to look for short-term solutions — bringing in [traveling] nurses, bringing in foreign nurses who are already trained.”

Those staffing solutions have become far more costly. Traveling nurses’ wages have risen from $65 to $80 per hour in the early months of the pandemic to well over $250 an hour — “a huge financial burden for hospitals,” Clark said.

He added, “Until we get to the point where we can grow our own nurses and health care workers, we are not going to be in a sustainable position.”

With just over 10 days left in this year’s legislative session, she wrote: “We don’t see there is time to put in more [legislation] this session. We will work during the interim with our members and other healthcare provider partners to look for opportunities and best practices to build upon in preparation for the 60-day session” in 2023.