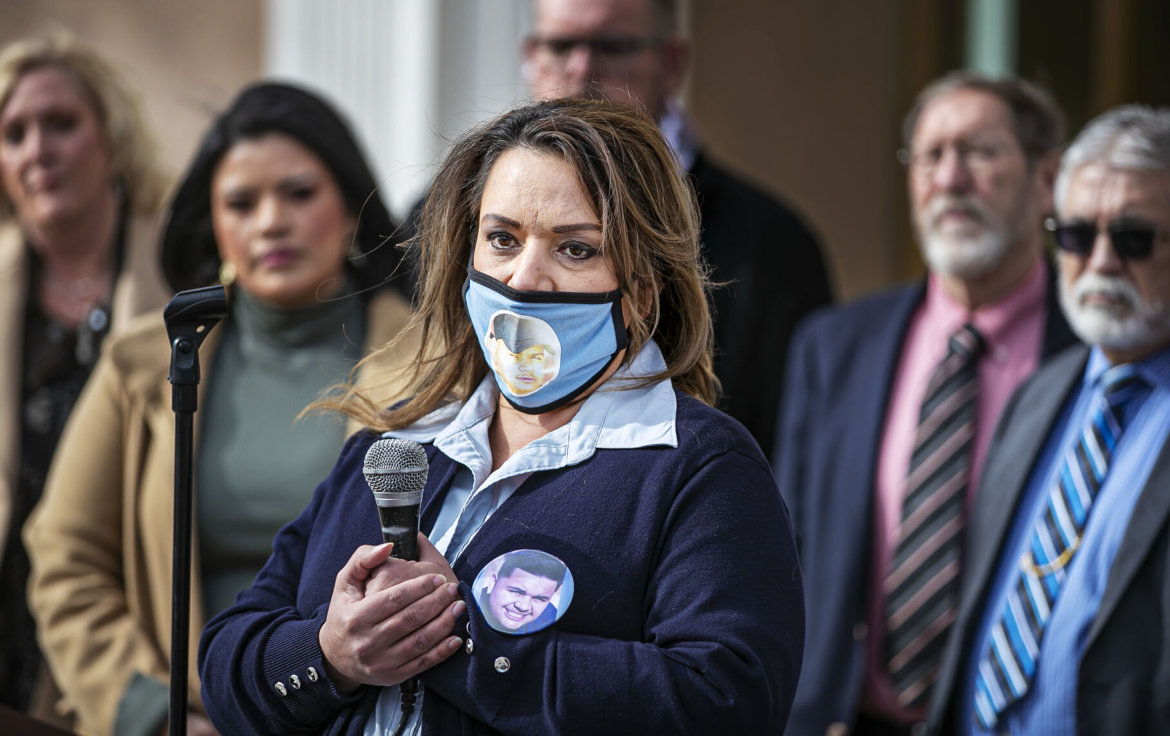 Jennie Becerra, mother of Jacob Becerra, who was slain in 2020, speaks against a bill that would end life sentences without parole for juvenile offenders. She was among the family members of violent crime victims who gathered Wednesday for a news conference outside the Roundhouse.

Less than a month after Gov. Michelle Lujan Grisham held a news conference to say she was going to push a “tough on crime” agenda in this year’s legislative session, district attorneys, Republican lawmakers and crime victims held their own gathering Wednesday to deliver a very different message.

The governor’s crime reform platform, they said, is going nowhere.

“We were promised it would be a tough-on-crime year,” said Nicole Chavez, whose teenage son, Jaydon Chavez-Silver, was killed in a shooting in Albuquerque in 2015.

“That’s not what is happening,” Chavez said while standing outside the state Capitol. “Every single crime bill has been stopped or tabled.”

One piece of legislation that did clear the Senate this week, a “second chance” bill which bans life without the possibility of parole as a sentencing option for juveniles convicted of first-degree murder, outraged the parents of homicide victims and some Republican lawmakers.

The passage of Senate Bill 43 along party lines, with Republicans opposing it, led to Wednesday’s news conference by some of the governor’s critics.

Andrea Reeb, the district attorney in the 9th Judicial District in Clovis, said the governor’s message on that bill seems to be: “Let’s let violent offenders out early.”

Lujan Grisham countered in a phone interview with journalists Wednesday afternoon that she was baffled by the lack of progress on so many proposed bills to battle crime in the state.

Bills Lujan Grisham has called for include proposals to increase retention pay for police officers; elimination of a six-year statute of limitations on second-degree murder charges; and giving judges more leeway to keep defendants jailed until trial if they pose a violent threat to the public.

But time and again many of these initiatives have been derailed — generally by members of her own party.

Earlier this week members of the Senate Health and Public Affairs Committee voted along party lines to table a bipartisan legislative effort to change to the state’s pretrial detention process for defendants suspected of certain violent crimes. The committee’s Republican members voted against that measure but lost on a 5-3 vote.

Several other crime-reform bills, including the removal of the current six-year statute of limitations on second-degree murder, are waiting in line — and sometime very long lines — to get a hearing to help move them along to the House or Senate floor for a full vote.

The House of Representatives did overwhelmingly vote Wednesday to approve creating a fund to provide retention pay for law enforcement officers around the state at the four-, nine-, 14- and 19-year marks of service.

The House was expected to hear a bill that would make it a third-degree felony to operate a chop shop — a business that dismantles stolen vehicles to sell for parts — sometime this week as well.

“There comes a time when the public doesn’t feel safe and that feeling of not feeling safe is going to lead to the election of new officials,” Baca said. He said there seems to be “no real appetite” to pass criminal reform bills this session.

“So far we haven’t seen any bills that are truly tough on crime,” Baca said.

Rep. Bill Rehm, R-Albuquerque, said he sees Democrats’ “tough on crime” initiatives as a political ploy in an election year.

Rehn said despite the governor’s desire to see some of these initiatives passed into law, progressive Democrats in the Legislature are working to stop them.

Reeb said after the news conference that she didn’t know whether the lack of action on the part of lawmakers has to do with a “lack of communication” between Lujan Grisham and state Democrats.

In an email, House Speaker Brian Egolf, D-Santa Fe, wrote lawmakers are making “big investments in law enforcement recruitment and retention to ensure swift and certain justice, behavioral health to prioritize treatment and prevention, and programs that address the needs of victims and communities impacted by crime across the state.”

He said there are still a number of crime reform bills “working their way through committees and onto the floor that would give law enforcement the tools and resources they need to do their jobs effectively, deter crime with targeted penalty enhancements for serious crimes, and support proven prevention efforts.”

Reeb said she isn’t confident much more will be accomplished in the last seven days of the session, which ends on Feb. 17.

“We feel we will be leaving this session with nothing happening [on crime],” she said.