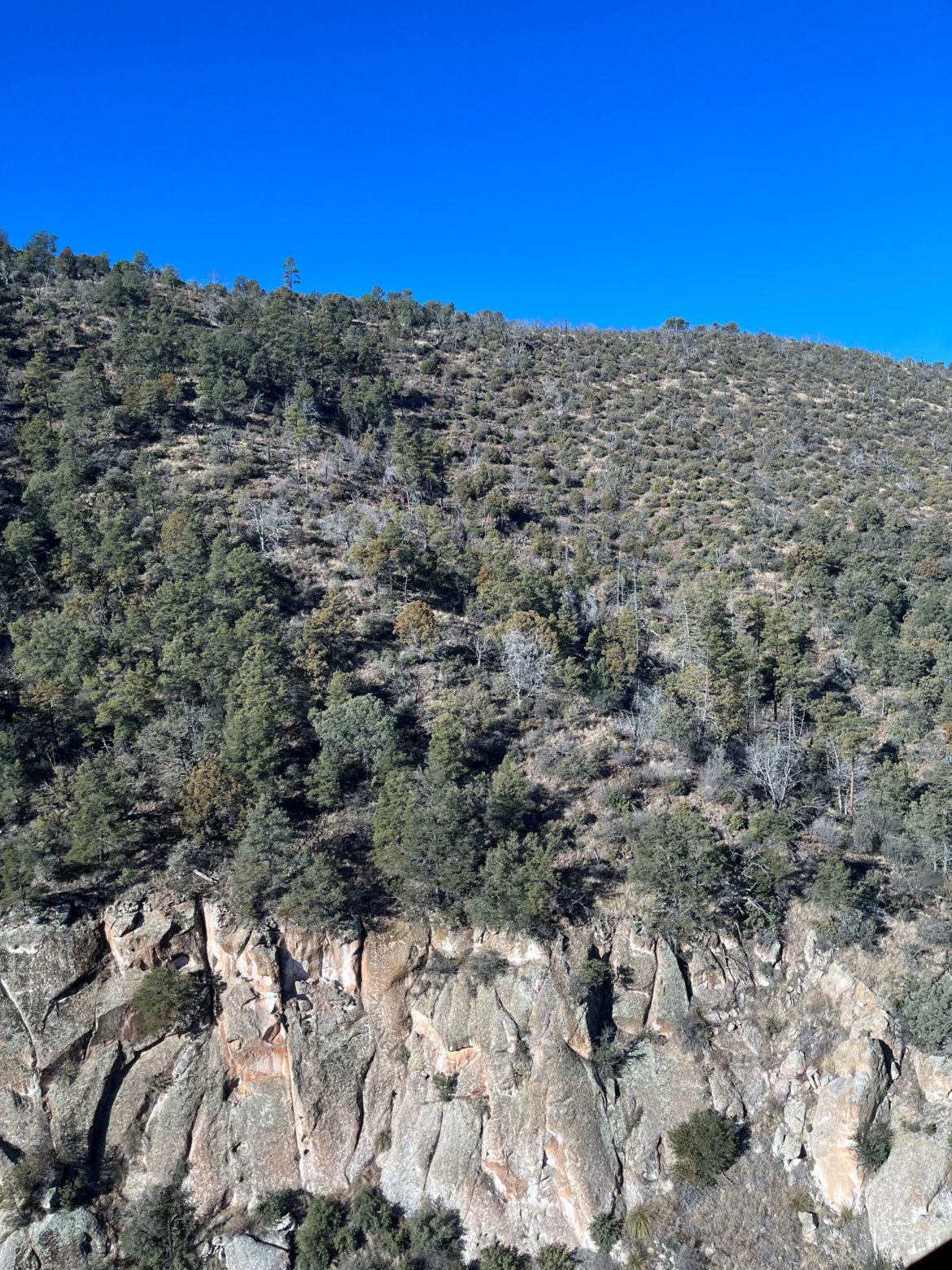 A flight photo shows what the area where the unbranded cattle are roaming.

The U.S. Forest Service has been dealing with the problem of unbranded cattle roaming and damaging the Gila National Forest since the 1990s, with contracts awarded on a semi-regular basis dating back to 1998 to remove the animals. But a current plan to use helicopters to shoot the cattle resulted in backlash from ranchers as well as state legislators.

The shooting of cattle is underway this month, starting Thursday morning.

The New Mexico Cattle Growers Association filed a complaint in the federal district court of New Mexico this week asking for a restraining order to prevent the aerial shooting of cattle, however, following an emergency hearing on Wednesday, the request was denied. The operation targets three herds of cattle totalling 150 animals.

At the same time, the House Agriculture, Acequias and Water Resources Committee voted 5-2 in favor of a committee substitute for House Memorial 44, requesting that the New Mexico Livestock Board, the New Mexico Department of Agriculture and the U.S. Forest Service collaborated to resolve the issue and create agreements to expedite the removal of the cattle. The sponsor, Rep. Luis Terrazas, R-Santa Clara, described the aerial shooting as cruel and inhumane.

The committee substitute changed the language from feral to estray. Estray cattle fall under the purview of the New Mexico Livestock Board. It also added language stating that shooting of estray, unbranded cattle is cruel and dangerous and that the animals should instead be gathered in the most humane way possible.

Bronson Corn, president-elect of the New Mexico Cattle Growers Association, spoke in favor of the memorial and said the producers want to sit down with the government and have conversations to prevent something like this from happening again.

“The main thing we want right now is for this to stop. We don’t want any cattle being shot. That is no good for anybody,” he said.

Rep. Candy Ezzell, R-Roswell, said the state livestock laws requires the livestock board to inspect any estray animal that is gathered and, if the owner can’t be identified, it is auctioned off.

“I think that our livestock laws in the state of New Mexico are quite clear and they should not be violated by any agency of the federal government,” she said.

But opponents of HM44 said these cattle don’t meet the definition of estray and are instead cattle that are feral.

According to information provided to NM Political Report by Suzanne Flory, the interim national press officer for the Forest Service, the cattle are damaging habitat in the Gila National Forest and pose a threat to native species, including some that are federally listed. Cattle are not native to the Gila and their numbers are increasing, she said in her emailed response.

The Forest Service posted impoundment notices in early October to notify the ranchers of the plans and also directly contacted permittees with livestock grazing in areas adjacent to where the unbranded cattle are being culled. Flory said that none of the ranchers with adjacent permits responded that they had any cattle in that area. Notices were also published in October in several newspapers in the area.

In addition to informing ranchers, the Forest Service said extensive studies were conducted and no branded cattle were observed. These include surveys and reconnaissance missions that occurred in the past week prior to commencing the aerial shooting. If a branded cow is killed, though, the rancher can file a claim against the federal government for compensation.

As for the unbranded cattle, the Forest Service followed procedures to notify potential owners that they needed to go in and remove their livestock, Flory said.

“In a typical scenario, an owner coming forward after the Forest Service takes action to remove cattle would need to pay for expenses incurred by the United States to gather and remove said cattle,” Flory said.

Todd Schulke, co-founder of Center for Biological Diversity, said he has spent hundreds of hours in the area where the cattle in question are roaming and in other parts where there are trespass cattle on rivers in the national forest.

“We have never documented a single branded cow in this area of the Gila Wilderness where the feral cows are,” he said. “It’s a fairly unique situation. We see this as a narrow, unique approach to a terrible problem.”

As for rounding up and auctioning off the livestock, Flory said the cattle in the Gila live in “some of the most rugged and inhospitable terrain” within that national forest. She said there have been eight prior efforts to gather the cattle and remove them from the Gila National Forest. Those efforts have yielded limited lasting impacts.

“Not only are the removal contracts difficult and becoming less and less effective, they have also proven to be dangerous,” she said. “Safety is a top priority for the Forest Service, and the wild and unruly nature of these animals, combined with the inhospitable terrain they are in, can be dangerous for all parties involved in the gather.”