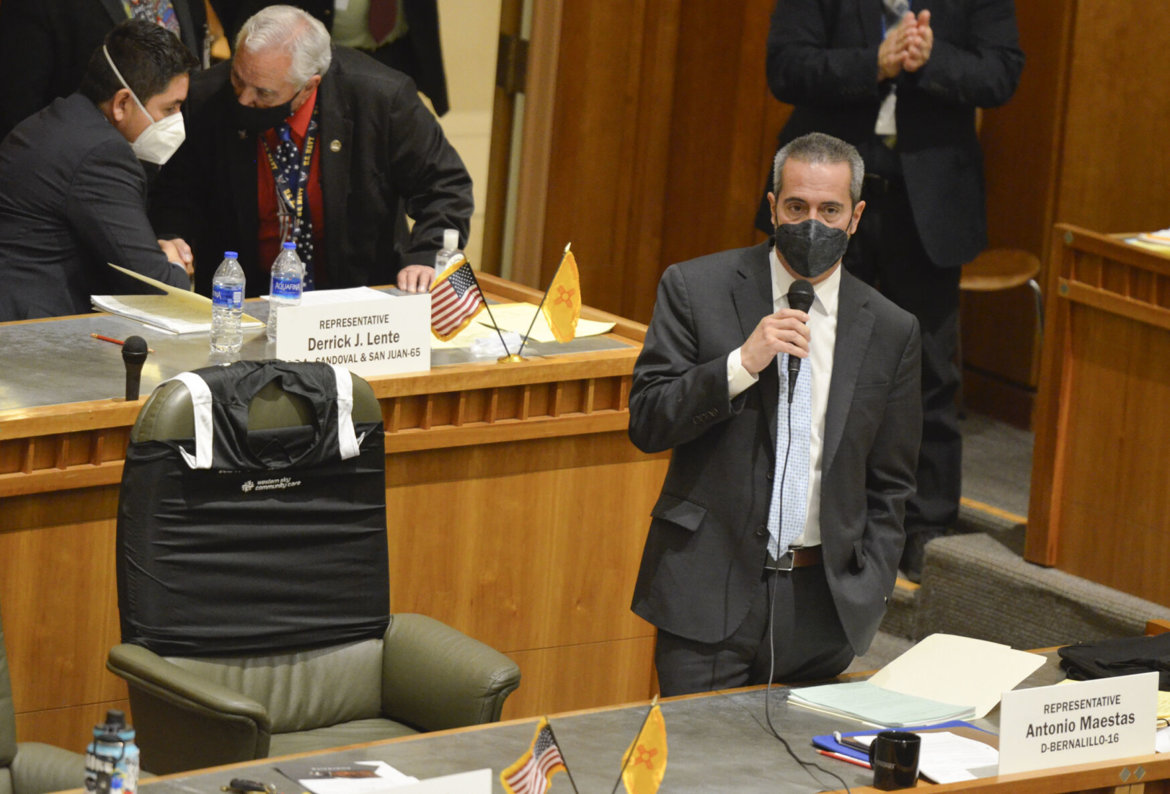 Rep. Moe Maestas, D-Albuquerque, speaks Friday at the Roundhouse during debate on House Bill 79, a crime reform bill that would do away with the six-year statute of limitations on second-degree murder charges.

In many ways, it felt like high noon on the House floor for Gov. Michelle Lujan Grisham.

Lawmakers on Friday debated one of the governor’s favored pieces of legislation — a crime reform bill that would do away with the six-year statute of limitations on second-degree murder charges. Moving the bill forward from the House of Representatives to the Senate with less than a week left to this year’s 30-day legislative session would provide a breakthrough — or at least movement — in what had been a succession of stalled measures.

Fortunately for the governor, the drama was dispensed with quickly: It took the House less than 20 minutes to discuss and vote to approve House Bill 79, which now heads to the Senate for consideration.

For Lujan Grisham, who has been pushing for tougher penalties for violent offenders and tighter pretrial release standards to keep those defendants behind bars, Friday’s action was a small victory. But in terms of momentum and any sense of success for her crime relief package, a necessary one.

“Making dozens of unsolved homicides eligible for prosecution and resolution when they are solved will have an incredible effect on New Mexico families across the state,” the governor said in a statement issued by her office. “This important legislation will ensure that the road to justice for families of victims is preserved.”

Lujan Grisham is still pushing for more crime reform initiatives, including a bill that will make it tougher for violent offenders to gain release before their trial and legislation to increase police officer recruitment and retention pay to ensure the state has enough law enforcement officers to contend with a rise in crime.

But legislative efforts to impose stricter guidelines for releasing a violent offender pending trial seem likely to be dead at this point. One such effort was tabled in a Senate committee hearing early this week.

And House Bill 5, which initially included similar pretrial release mandates to the Senate bill, has since been stripped of those provisions. Instead, it now focuses on requiring the pretrial division of the judicial court system to provide round-the-clock monitoring of the locations of people who have been charged with a felony and released before trial.

Critics say that is not being done now, which means violent offenders wearing ankle monitors are sometimes free to commit more crimes while awaiting trial.

The House is likely to hear HB 5 sometime this weekend.

Rep. Larry Scott, R-Hobbs, took exception with bill’s fiscal impact report and what he said was an emphasis on the financial cost of doing away with the statute of limitations.

The report says the change in regulations means more people will be locked up awaiting trial at a cost of $2.3 million to the state.

Scott said most people do not care about that, adding most simply want to know, “Will this make law-abiding citizens safer?”

Rep. Bill Rehm, R-Albuquerque, who has long pushed for similar legislation in the past without success, earlier this week said HB 79 is necessary to ensure law enforcement officials have time to build a case and arrest suspects. He pointed to the high-profile slayings of about a dozen women on Albuquerque’s west mesa more than a decade ago.

The bodies of the women were found in February 2009. Rehm, one of the HB 79 sponsors, said this week it would be nearly impossible for police to charge someone in those deaths 13 years later.

HB 79 is one of just a few crime reform bills that have cleared the House in this year’s 30-day session.  On Thursday, the House overwhelmingly voted to approve a measure creating a new third-degree felony for anyone running a so-called chop shop — an illicit business that dismantles stolen vehicles to sell for parts.

Republican lawmakers, victims’ advocates and Lujan Grisham have all expressed frustration with lawmakers’ abilities to pass tough-on-crime legislation this year.

The governor held a news conference earlier this week to say “it defies explanation” why lawmakers in the Democrat-controlled Legislature have been unable to reach consensus on crime-fighting bills.